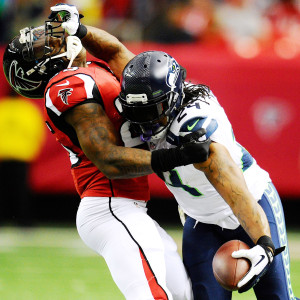 I love me some Marshawn Lynch.

Do you guys remember last Super Bowl?  Why wouldn’t you?  It wasn’t all that long ago.  The two weeks preceding the biggest sporting event of the year feature the most obnoxious media coverage to ever grace our television sets.  Despite the fact that there’s a rather important football game to be played, all anyone seems to ask about is anything BUT football.  The pinnacle of our nation’s cluelessness might have come years ago when one member of the media asked Donovan McNabb how long he had been a black quarterback.

In a day and age where we scrutinize every athlete’s last word, Marshawn Lynch says nothing.  In fact, he was fined $50,000 by the league last year for refusing to speak to the media.

AJ McCarron played four years at the University of Alabama.  He’s currently third on the Cincinnati Bengals depth chart which means it will be a very long time and two debilitating injuries before he ever sees any playing time.  That doesn’t stop him and his mouth from making the headlines. 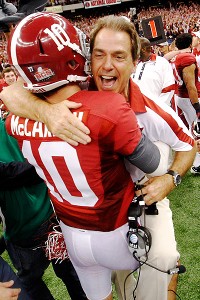 In a recent interview with some godforsaken news reporter, McCarron was asked how he felt about Alabama’s loss to Ole Miss and his former college coach Nick Saban.

The calm and collected Nick Saban probably refused to comment on these matters but that didn’t stop former NFL quarterback and current analyst Fran Tarkenton from chiming in.

“Oh gosh, it’s AJ McCarron.  Did he go to class? Did he make the league or not? He needs to be quiet. He was so fortunate to play in that program. He’s an average quarterback at best. He played fine, but he couldn’t have played anywhere else but Alabama.  To make a comment like that is just disrespectful. He should keep his mouth shut and praise Saban and Alabama for the rest of his life.”

Good to know Tarkenton has Saban’s back.  Fran’s right too but in the grand scheme of things, how does any of this matter?

Now you all see why I like Marshawn Lynch so much.

Remember back in high school when someone got drunk at a party, made out with someone else and for the next few weeks, it was all anyone could talk about? 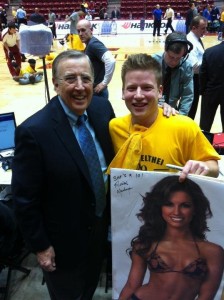 Someone saying (or doing) something stupid and someone else running with it.

Were McCarron’s comments out of line?  Who cares?  Should he have just said he was upset with his alma mater’s loss?  Probably.  But why is this news?  I guess I should just be happy we’re not talking about McCarron mistreating his wife.  That’s something Brett Musburger would rather do anyway.

As much as I love reading about sports, it’s the misshaped, mistook and misremembered comments athletes blurb that I could live without even though it does give us plenty to write about.

That’s why, as much as we want to get a feel for what athletes are truly like, sometimes it’s just better not to.  They’ll only disappoint.

But not Marshawn Lynch.

19 thoughts on “They said what? Volume 9: AJ McCarron, Nick Saban and why Marshawn Lynch is my favorite athlete”