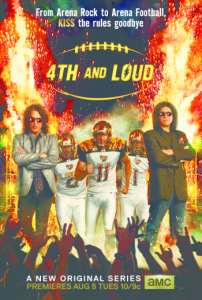 What do you get when you mix football, rock and roll and reality television?  4th and Loud is your answer.

I’ll admit to being slightly intrigued about the possibilities for this show when I first saw the previews and I’m not even a Kiss fan.  I have far too much musical taste.

I’ve been to only one Arena Football League game in my life.  It was years ago on a whim and I immediately regretted it… except for all the bikini tops I saw there.  Don’t get me wrong.  I have nothing against bikinis.  I just don’t go to football games to see them.  One would think the presence of Kiss team owners Gene Simmons and Paul Stanley would increase the bikini factor tenfold.

I caught a glimpse of one of their games on ESPN.  Their uniforms and off-colored field grabbed my attention.  So I decided to give their show a shot, a fair review even.  With the amount of crap on the tube these days, I wondered if this program could provide entertainment where most reality TV shows, in my mind, do not. 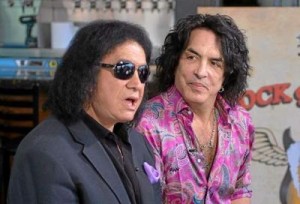 Could 4th and Loud get me to watch Arena Football?  Could it keep my interest?  Could I tolerate staring at Paul Stanley’s horrible facelift and Gene Simmon’s JewFro one hour at a time?

There was only one way to find out.  I set my DVR to record the show to see if it was at all worthwhile and perhaps save you the trouble of doing so yourselves.

As any good Episode One should, the premier broadcast introduces the main characters and their dedicated efforts to get Team Kiss off the ground.  Not only is their team a business, it is Stanley’s and Simmons’ lifelong brand.  As figureheads, they are more than just financially vested.  They also, however, quite unrealistically want a championship in their first season.  Someone should have informed them Rome was not built in a day.  The season becomes a constant struggle to combine entertainment with a winning football team. 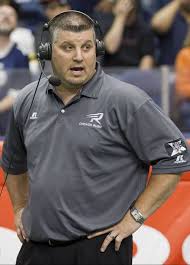 We are introduced to Head Coach Bob McMillen, a man with a long record of coaching success in the league.  He does his best to hold his ground when it comes to fielding talent, something which is easier said than done when so much is focused on marketing over substance.

Colt Brennan makes an early appearance.  Remember him?  The Hawaii Heisman hopeful tries to make this team but a 2010 car accident left him with slight brain damage.  Ultimately doctors do not give him a clean bill of health.  JJ Raterink, a league vet, who smacks of Dennis Quaid in the Any Given Sunday, gets the nod as starter, more out of necessity than anything else.  With Raterink behind center, this team will struggle with quarterbacking issues all season long.

We also meet a number of lesser-known players who, in trying to make this team, remind us that not every professional football player in this country makes ten million dollars a year.  Oh, and then there are the cheerleaders.

As an expansion team, the LA Kiss are behind the 8-ball when it comes to fielding their opening day roster.  Stanley and Simmons are obsessed with putting a winning product on the field but their unrealistic expectations are tempered by a coaching staff that understands the roster cards they’re dealt.

As the episodes roll on, we see Team Kiss win their first game against San Antonio but struggle the rest of the way out.  There are even, as one would expect, heated moments between coaches and players, one that takes place while a game was actually going on.  Oh, reality television, how I despise thee.  4th and Loud isn’t exactly mind-numbing programming but it’s not exactly educational either.

Co-owners Brett Bouchy and Schuyler Hoversten, two of the show’s least likeable characters, are constantly scrambling to ensure their football games pack an entertainment punch. Pyrotechnics, suspended go-go dancers and the players entering through elevated scaffoldings all add to the entertainment value. 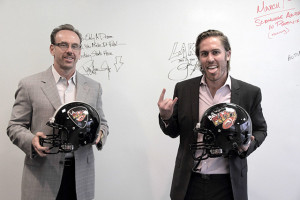 But what about the wins?

Budgeting huge productions ultimately distract both players and coaches.  I’m pretty sure having a camera stuck in their face didn’t help matters either.

After a successful start, Team Kiss gets exposed for what they really are: a team ill-prepared to compete against the better teams in the league.  As they start to lose, the drama mounts and 4th and Loud devolves into your traditional reality TV show:   athletes and the women they cheat on, men trying to make money, people getting fired and all the drama that ensues when cameras follow people around in their allegedly unscripted lives.  Infidelity, infighting and insolence, oh my!

Things finally come to a head after they start the season 2-8, getting outscored in one game 70-21, then the next 70-25.  Cue the shit hitting the fan.  Things also get juicy when a quarterback they bring to replace Raterink tries to take the head coach’s job. 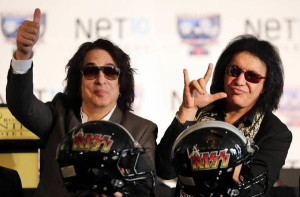 I can’t say the show wasn’t entirely well done.  It’s just difficult for me to commit an hour of my week to anything that doesn’t involve work or sleep.  It is entertaining to see Simmons and Stanley play the dickhead bosses we all love to hate.  Perhaps a cameo in Horrible Bosses 3 is in order.

The good news is the show is not as bad as the team, which is saying something considering how bad the team actually turns out to be.

4th and Loud was Hard Knocks-ish on an Arena Football level, just with a little more face paint and Kiss paraphernalia.  There are some engaging personalities, guys with real world problems who when they don’t make the team must turn back to their day jobs but isn’t that what happens to all of us?

If you’re a fan of Arena Football and/or Kiss, you’ll probably get a kick out of the show.  Its future, however, remains uncertain.  AMC has decided not to renew 4th and Loud.  It may still be picked up by another network.  If Simmons and Stanley have anything to say about it, it will be.  But as they learned in their initial season, that still won’t equate to wins on the football field.