SportsChump.net has been around for quite some time, long enough at least for the site to generate a (bad) reputation.

Because of the site’s longevity (five years and counting) and my occasionally, eye-catching spikes in traffic, I receive the strangest offers.  I regularly receive copies of the latest sports-related books from one of my generous (and patient) publishing houses.  Another company actually wanted me to review their fruit juice (which wasn’t all that bad, it was just a little too cherry). 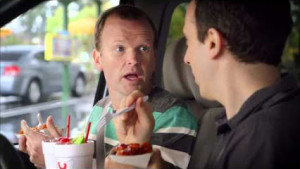 My latest suitor is one that perhaps you’ve heard of before.  After all, their commercials are on television every other second and provide a chuckle thanks to the occasionally comical T.J. Jagodowski and Peter Grosz.

That’s right, you guessed it.  The good people at Sonic have asked me to review their latest menu item: the boneless chicken wing.  I must be moving up in the world.  Either that or I look real hungry.

Let it be known that I rarely eat fast food, unless I’m coming home from work at four in the morning and find it absolutely necessary.  However, when Sonic offered me the opportunity to host my own tailgate party with the only caveat being an honest review of their newest deliciousness, who was I to turn down such generosity?

But who would I invite and where would this party be held?  Luckily, some good friends of mine were celebrating their going away party at a local pub I’ve been known to frequent.  This particular establishment did not have a kitchen so I asked the bartender, also a friend of mine, if he minded whether I catered the party with Sonic goodness. 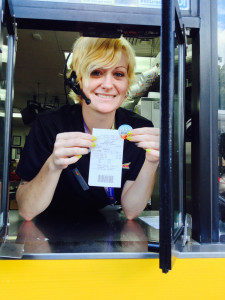 He agreed, of course, as long as he got a batch of wings to call his own.  I felt that was a fair trade.

First off, the service at the Sonic was delightful.  The cashier did not seem the slightest bit bothered by the fact that I pulled up to order $100 worth of wings without any advance notice.  Little did she know her smiling face would grace my website.

Sonic’s new wings come in three different flavors: Barbecue, Buffalo and my personal favorite, Asian Sweet Chili.  They also come in three different sizes: 6, 12 and 24.  $100 got me two orders of each of the 24-pieces which were enough to feed my party and then some.  As I walked back into the bar with just shy of 150 wings, I felt like Santa Claus doling out chicken finger goodness on Christmas morning.

It should be noted that my party was comprised almost entirely of service industry people so those I asked to partake of said wings came with a discerning palette.

Here were some of their responses…

Dr. M. – “My new go to tailgate food.  Put that with a cherry lime-aid and it beats any food off a grill in a parking lot.”

Ashley K. – “So delicious and meaty.  Can I have seconds?”

Mandy S. – “I’m so upset I’m moving to Pennsylvania.  Wait, they have Sonic up there too?  Sweet!”

Denise H. – “I DON’T EAT CHICKEN!!!”  Note: Denise’s Saints had just lost in overtime so she was a little cranky.

Nathan U. – “Even with my bad leg, I’d limp up the stairs for more of them wangs.”

Josh M. – “I’ll get to these wings as soon as my customers stop ordering drinks.  Stop asking me questions.”

Ryan S. – “Gargle gurgle gargle gargle.”  Note: It was Ryan’s goodbye party.  He had been drinking a bit.  He seemed to like them though. 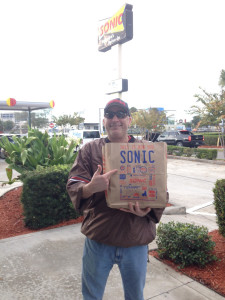 All joking aside, I would say about 80-85% of the people I polled generally liked the wings and like I said, this was a tough crowd to please, nothing but service industry folk.  They know good food when they taste it.  Even I went in with a skeptical eye, considering I work in an establishment that has some killer-ass wings.  I also have a sensitive stomach, trying to stay away from overly fried food as much as possible.  Let’s just say these wings did nothing to upset the applecart.

Sonic has done, dare I say, a fairly good job of putting out a quality food product that should definitely rival the boneless wings offered by other fast food establishments.  Dare I say they are even chicken-ier than other fast food boneless wings I’ve come across.  And having chicken wings actually taste like chicken is always a good thing.

My only major complaint was that the packaging wasn’t clearly labeled.  For example, when I laid them all out for people to enjoy, the boxes the wings came in failed to mention which flavors were which.  Regardless, they were all tasty.

So the next time you’re out and about and craving a snack, if you’re passing by a Sonic, give their wings a shot and let me know what you think.  Like I said, you can’t go wrong with the Asian Sweet Chili.

I’d like to graciously thank the good people at Sonic for their generosity and hope they enjoyed this review as much as my party enjoyed their hospitality.