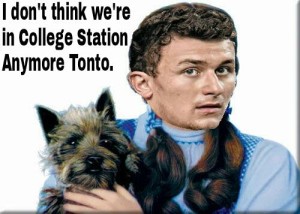 Tweeters were just warming up their thumbs.

The one they call Johnny Football finally got his first start as an NFL quarterback and let’s just say it didn’t go as well as he would have liked.  The Browns got shut out in their own stadium by a score of 30-0.

I didn’t watch the game.  I was busy watching my Bucs who have quarterback issues of their own.  I’m sure the loss wasn’t entirely Manziel’s fault.  Losses rarely are.  But after the defeat, I did take to Twitter to see what the world was saying about Cleveland’s next alleged savior.  Let’s just say, the Twitterverse wasn’t entirely kind.

Media: “You took some shots out there.” Johnny Manziel: “Yeah, I had some Jack on the sideline.” Reporter: “I meant hits.” Manziel: “Oh.”

Manziel BAC is higher than his QB rating 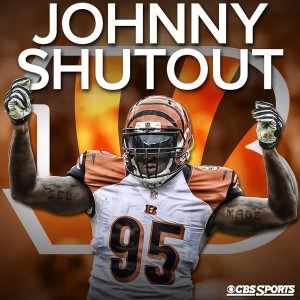 I’m sorry, but that Manziel debut is about the most Cleveland thing ever. #Browns

That wasn’t a football game. That was Manziel depicting my love life via interpretive dance.

I walked from the couch to the bathroom and back which means I now have more yardage than Manziel. -money celebration-

Doing the Money Manziel hand gesture but also playing two of the world’s smallest violins at the same time. 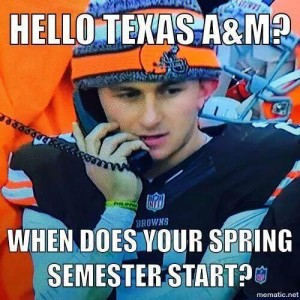 The next time I completely fail at something, I’m gunna throw the Manziel money sign up. Seems obligatory.

Of course PacMan Jones wants Johnny Manziel to show him the money. He’s got a strip club to go to after the game.

Manziel: “Yeah I’m disappointed in my performance, but I am excited that my money gesture has caught on with the Bengals.”

Was that Johnny Manziel, or scrawny armed Rob Lowe?

It’s a shame to see Johnny Manziel struggle so much. Hate for somebody with that much class fail. #thicksarcasm

Mr Manziel, welcome to the NFL. We’ve been waiting for you. Signed, NFL defenses.

Tebow and Manziel are going to be awesome together on the SEC Network.