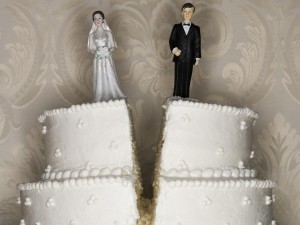 Some relationships are destined for failure.  You can sense it before it happens.  That first fight, that little squabble, that annoying thing your partner does that you put up with for a while but that you know will ultimately lead to an unpleasant breakup.

Some people were just not meant to be together.  That’s the way of the world.

Somewhat ironically, only yesterday a faithful reader and I, who both share a similar history in dysfunctional relationships, were talking about how the NBA season, to which nobody has paid attention to at this point, could desperately use a blockbuster trade to generate some interest.

Think about it.  How many NBA games this season have you watched in their entirety?  I’m an NBA junkie and I can’t say I’ve watched more than half a dozen.  That means you’ve watched less.

He and I discussed how a good, solid trade could shake things up.  Heck, David Stern used to engineer such trades to get people talking about his sport.  With football ending soon, we fans need something to keep us entertained while we pop our pops and scratch our crotches. 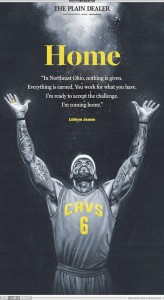 The NBA usually fits that bill.  On top of that, LeBron James heading home was supposed to bring more attention to the sport.

One-third of the way into the season, his Cleveland Cavaliers are treading water, a disappointing three games over .500.  LeBron’s been out with a knee injury.  Over that span, they’re 1-5.  They just lost to the Sixers.  It was only Philadelphia’s fifth win of the season.

But have no fear.  The Cavs just pulled off that blockbuster trade that will make everything better.

In a three-team, six-player deal, JR Smith ended up with a locker right next to the King and allegedly the Chosen One signed off on the deal.

Now don’t get me wrong.  Smith can put the biscuit in the basket.  Well, at least he could.  When he played in Denver years ago, he was a human highlight reel, jumping out of the gym and scoring with far more efficiency than he does now.  Since then, the only thing efficient about Smith is his inefficiency.  He’s a head case of a player that for all intents and purposes is not someone you want on your roster as you chase after a championship unless you have a) a solid foundation, which the Cavs don’t or b) a head strong head coach, which they don’t have either. 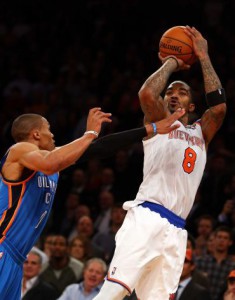 In his eleventh year in the league, Smith is putting up career lows in both scoring and field goal percentage.  The guy has regressed as a player.  The Knicks have to be ecstatic he’s left the building.  Now he’s LeBron’s problem.

The greatest of the great have always been able to temper personalities, egos, etc.  Jordan could but he also had the help of Phil Jackson on the sidelines.  LeBron is not Jordan and David Blatt is clearly no Jackson.  In fact, Blatt has barely more NBA wins than Jackson has championships.

And so the experiment begins, one I can’t help but think will end in failure.

Look, nobody expected the Cavaliers to win an NBA title in LeBron’s first season back.  But in the East, one would think they’d at least be able to contend.  If the playoffs started today, the Cavs wouldn’t even have home court advantage.

In case you couldn’t tell, consider me iffy on the whole ordeal.  I’m assuming the Cavs will look to Smith to give them some scoring off the bench.  Considering he has come off the bench for the majority of his career that might be a boost he’ll be able to provide.   But Smith is also accustomed to minutes and that might not be something he’ll see too much of in Cleveland.  Smith likes to shoot the ball and the last thing ANYONE wants to see is Smith launching more shots than LeBron.

That simply won’t work… which is why this JR Smith experiment won’t work either.

I wasn’t convinced the Cavs would win a title in LeBron’s first season back but I didn’t rule it out.  I have now.  Ultimately, this will end badly.  There may be a honeymoon, a winning streak where LeBron and Smith hug it out after a timely game-winning jumper.  But this team has fifty more regular season games to get to know one another, something they clearly haven’t done yet.  This is a team of veterans who are capable of coexisting but have little experience doing so.  And that’s what wins championships.  Just ask any team with a ring.

The city of Cleveland hasn’t experienced a major professional championship in over fifty years.  The arrival of JR Smith only means they’ll have to wait one year longer.

15 thoughts on “Coexistence and the difficulties that lie within: JR Smith lands gig with the Cleveland Cavaliers”