And then there were two.

That’s right, sports fans.  We are smack dab in the middle of the most anticipatory fourteen days of the sports year: the two weeks leading up to the Super Bowl.  After a long and rather unpredictable season, only two teams and one over-hyped football game remain.  The Seattle Seahawks and New England Patriots will soon meet in Super Bowl XLIX. 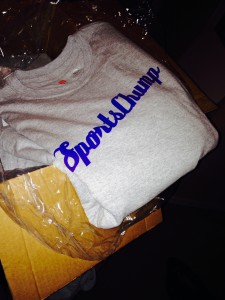 The Super Bowl has long been one of the biggest gambling days of the calendar year.  Last year, a record $120 million changed hands but this year, you’re in luck.  My Super Bowl contest won’t cost you a dime… just some time and a little bit of speculation.

All you have to do is earn the most points by correctly answering each of the propositional bets below.  Do so and one of these fancy new SportsChump t-shirts will be yours.

Please list your answers to the following twenty questions in order in the comments section below.

Best of luck, gang, and enjoy the big game.

1 point – Who will win the coin toss?

2 points – Will the coin toss land on heads or tails?

3 points – Will either team score in the first six minutes of the game?

4 points – Which team will score first?

5 points – Will the first score of the game be a touchdown, field goal or other?

7 points – Will the MVP of this game be a quarterback, running back or other?

8 points – Within one reception, how many total receptions will Rob Gronkowski have?

9 points – Will there be a two-point conversion attempted?

10 points – Within one touchdown, Tom Brady and Russell Wilson will combine to pass for how many touchdowns?

11 points – Will there be a defensive or special teams touchdown in the game?

12 points – The Patriots and Seahawks will combine to kick for how many successful field goals?

13 points – The over/under of this game is 49 points.  Will the total combined score of this game fall over or under that number?

14 points – Will Marshawn Lynch rush for over or under 100 yards?

15 points – How many different players, on both teams, will score a touchdown?

16 points – Will the overall margin of victory be over or under 6 ½ points?

17 points – Will Rob Gronkowski have over or under 75 receiving yards?

18 points – Will Russell Wilson have over or under 225 yards passing?

19 points – Will either Darrelle Revis or Richard Sherman have an interception?

20 points – Will either Tom Brady or Russell Wilson lose a fumble?

Tiebreaker: How many drinks will SportsChump consume during the game? (FYI… doubles count for two)

Ladies and gentlemen, the results are in.  I would hereby like to congratulate previous winner and all-round great guy, Senor Hanahan, for winning this year’s Super Bowl contest.

Han, I got new shirts in, brother, so send me your particulars.

Bets and Fenson, which by the way would make for a great name of a new TV show, came in a respectable second and third. 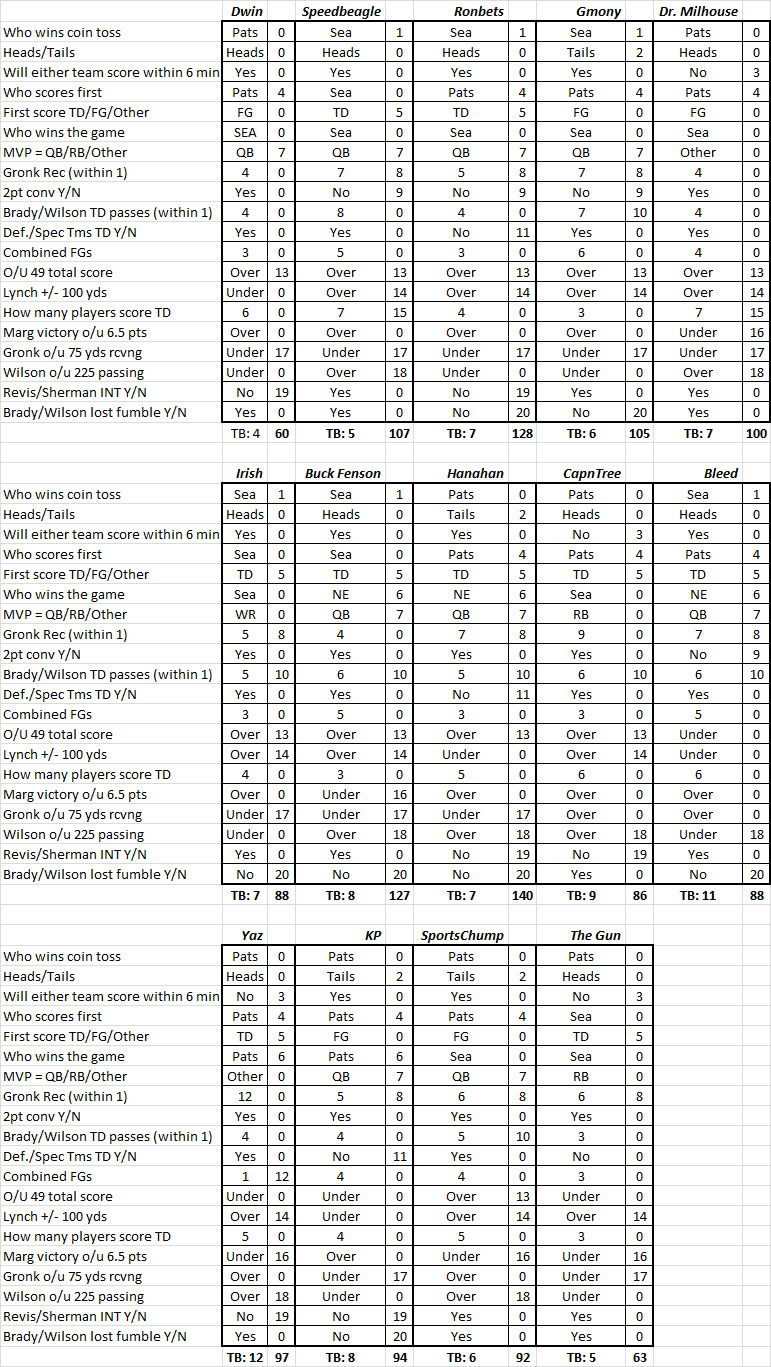