By virtue of finishing dead last in the league in 2014, the Tampa Bay Buccaneers hold the rights to the top pick in the upcoming NFL draft. What to do, what to do?  Do they go with Oregon’s Marcus Mariota?  Do they build their future around FSU’s Jameis Winston?  Do they trade the pick and weigh their options?  Top sports betting sites expect the Bucs to go with the in-state star for now, but the only thing that’s for certain is that they cannot go another year without a quarterback.  Not in this league, not if they want to have any sort of success.  The fact that Vinny Testaverde is still the leading passer in franchise history is enough to turn my stomach. 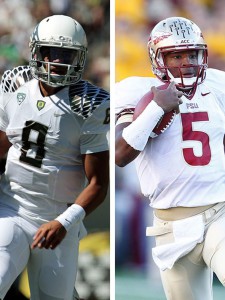 With the impending Mariota-Winston dilemma staring my beloved Bucs squarely in the face, I decided to look at the last twenty years of draft questions between numbers one and two in both the NFL and NBA to see who got their 1-2 picks right and who got them drastically wrong.

The first draft that comes to mind that compares to this one is the 1998 NFL Draft, not because of the talent involved but because of the indecision.  Anyone with half a brain realized at the time that Peyton Manning was the no-brainer choice over Ryan Leaf BUT there were still a ton of people out there who believed Leaf was a worthy adversary.  Silly rabbit.  We all know how that turned out.  Peyton will go down as one of the greatest NFL quarterbacks ever and Leaf’s whereabouts are currently unknown.

In 1999, Tim Couch and Donovan McNabb were chosen one and two.  At the time, Couch, a Kentucky Wildcat, was putting up Tecmo Bowl-like numbers in the SEC.  McNabb was making a name for himself at Syracuse but eight out of ten GMs polled probably would have gone with Couch.  We know how that turned out.  Couch was a bust and McNabb, while having a dysfunctional career in Philadelphia, was clearly the better NFL QB.

Things are a little more tricky in the NBA because until fairly recently, GMs were choosing high school players versus college players where that isn’t the case in the NFL 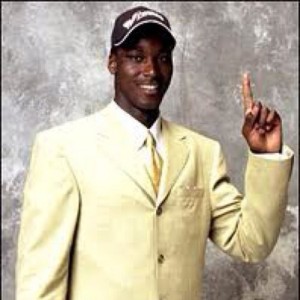 In 2001, Washington chose high school prospect Kwame Brown with their top pick leading the Clippers to select Tyson Chandler second.  I don’t recall there being much debate about that pick but in retrospect it’s clear which team got the better end of that deal.  Chandler is still a force in the league while Kwame was the first stain of many on Michael Jordan’s resume as a GM.  He averaged 6.6 points per game over a journeyman career that spanned seven different ball clubs.

In 2003, the most historic draft in recent history, LeBron went one #nobrainer then Joe Dumars sealed his fate by taking Darko Milicic over Carmelo Anthony, Dwyane Wade and Chris Bosh.  As a result of the curse of the Darko, the Pistons haven’t been relevant since.  Can you imagine if Melo had developed within the context of that championship Pistons team?  You can’t convince me his career and the recent history of the Pistons wouldn’t have turned out considerably different.

In 2004, I think we see the biggest comparison to the Mariota-Winston debate.  Emeka Okafor had just won a national championship at UConn.  Even though most scouts could see he would become a unidimensional player at the next level, Dwight Howard was an unheard of high school product.  Orlando opted for Howard which was clearly the right thing to do even though he no longer plays there but back on draft day that year, there were huge question marks, just like there are currently with Mariota and Winston. 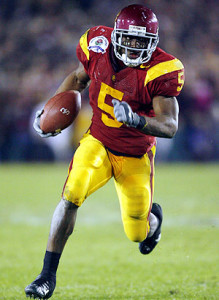 There was also great debate in the NFL draft of 2006.  Reggie Bush was coming off one of the greatest seasons a college football player had ever had yet the Houston Texas opted for Mario Williams, concerned that Bush’s success wouldn’t translate to the next level.  I’ll let you determine for yourself whether Houston made the right pick.  Williams is still in the league and making plays although it’s probably safe to argue not at the level of a number one draft pick.  Bush is still effective as a utility back and does have himself a Super Bowl ring from his New Orleans days.

In 2006, the Raptors chose Italian Stallion Andrea Bargnani over Texas’ LaMarcus Aldridge but hey, they’re Toronto, ey?  No one expects championship level decision-making to come out of that organization.  This is a team that once had Tracy McGrady, Vince Carter, Antonio Davis, Doug Christie, Dell Curry and Mugsy Bogues and got nothing out of it.

You can’t teach height.  You also can’t teach health. In 2007, the Portland Trailblazers opted for the seven-footer Greg Oden over Kevin Durant.  An argument could have been made for both players.  I don’t want to say Oden was a gamble but health issues were a concern.  He was also seven-feet tall.  Anyone who watched Durant play in college knew he was a once-in-a-lifetime player.  It’s safe to say the former Seattle Supersonics got the better end of this deal.  Can you imagine Durant on this Portland team?  #frightening 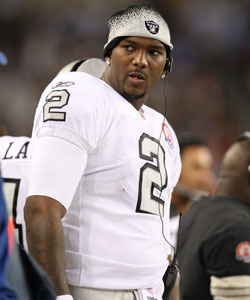 In 2007, Oakland, a team that hasn’t made a solid draft pick in years, chose JaMarcus Russell.  They ended up paying him $13 million in 2009 for essentially being a bust.  Calvin Johnson went number two to Detroit.  ‘Nuff said.

Back in the NBA, In 2008, you couldn’t have gone wrong with Derrick Rose at number one, Russell Westbrook at four or Kevin Love at five… unless Rose tears another ACL, which hopefully he won’t.

And In 2012, Andrew Luck was a no-brainer pick over Robert Griffin III but some (very few) people still liked RGIII over the Stanford product.  Either way, these two went in the proper order with Luck the best young QB in the league and RGIII fighting once again for his starting spot.

I’m a Buccaneers fan and I’m glad this Mariota-Winston decision is not left up to me for I have no earthly idea, nor crystal ball, that tells me which will be a better fit in the Tampa Bay offense specifically and the league in general.

33 thoughts on “Decisions, decisions: #1s versus #2s over the years”