It’s getting bloody out on the tundra and offensive and defensive linemen are still on spring break. 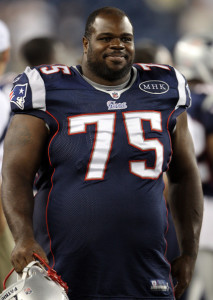 By the time next NFL season rolls around, we’re going to need an all-inclusive fan guide to see who’s playing where and this all happened before free agency hit.  So far, a slew of names that have been forever associated with their franchises have gone their separate ways.

Vince Wilfork is 33 years old.  He’s played 12 seasons for the New England Patriots, the team who drafted him.  His unmistakable, 325-lb frame (and that seems light) is largely responsible for getting the Pats to their healthy collection of Super Bowl appearances.  Wilfork, however, won’t be playing in Foxboro next year.  Here’s your parting gift, sir: some Slim-Fasts and a contract elsewhere.

Troy Polamalu has been synonymous with the modern-day Pittsburgh Steelers.  The Head and Shoulders pimpin’ safety has not been cut yet but let’s just say him staying in the Steel City would require some fine tuning.  Unfortunately for Troy, one of those tunes doesn’t include him getting younger.

Reggie Wayne is in his 15th season, all with the Colts, the team that drafted him.  He’s scored 82 touchdowns in that white and blue uniform.  He won’t be scoring 83.  He was cut last week and is currently looking for work. 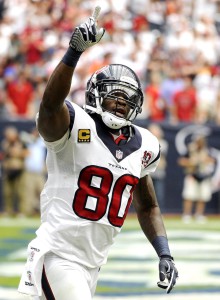 The Texans haven’t openly cut Andre Johnson but they have pretty much made it public they won’t be re-signing him.  Johnson has been with the Texans since 2003.

The Saints have cut Pierre Thomas.  The Packers released AJ Hawk.  The Dolphins told Brian Hartline his services would no longer be needed.  Darnell Dockett was also released.  Brandon Marshall was traded but when is he not?  Heck, even Peyton Manning took a pay cut.

If you ever needed a reminder that the NFL is first and foremost a business, just thumb through the transactions section of your local newspaper.

The bottom line is nothing lasts forever.  Joe Namath was a Ram.  Joe Montana quarterbacked the Chiefs.  If the numbers don’t line up on the P&L ledger, even the face of a franchise can end up in another uniform.

About once a week on his daily broadcast, ESPN’s Colin Cowherd will field a call from a homer Patriots fan who will proudly proclaim that Tom Brady will retire a New England Patriot.  Cowherd will chuckle, guaranteeing that not only will Brady finish his career elsewhere, the Patriots won’t think twice about moving him. 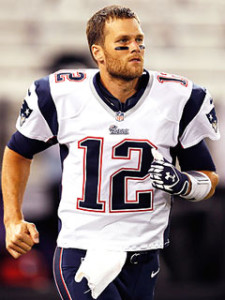 If Brady is serious about playing until he’s umpteen years old and the Pats see that he’s lost a step, they’ll sit him down and make him an offer.  You know, to do the right thing.  But if Brady is adamant about his continued passion for passing, he’ll be cashing someone else’s paycheck.

NFL teams function under strict cap rules.  When a veteran’s salary rubs that number the wrong way, they’re as good as gone.

So why get all misty-eyed when guys like Wilfork and Wayne don’t finish their careers where they started?  If you want loyalty, buy a dog.

This has been going on since the dawn of time.  Think back to 1919 when Babe Ruth was sold from Boston to New York for $100 grand because Harry Frazee had a hankering for musicals.  And Ruth was in his prime!  It took Boston 86 years to recover from that.  While they’ll miss him, it won’t take New England nearly as long to recover from the loss of the equally-rotund WIlfork.

So the next time you hear a sports fan gripe about how players no longer stay with the same team for their entire career, tell them to stick a fork in it.  Loyalty takes a back seat to winning every time.

15 thoughts on “Another one bites the dust: NFL veterans realize their true net worth”