Earlier this week, an NFL player that nobody had ever heard of announced his retirement.  His reason:  fear of irreparable brain damage.  His departure from the game he barely played made national headlines and became yet another reminder of the savagery of a sport in limbo. 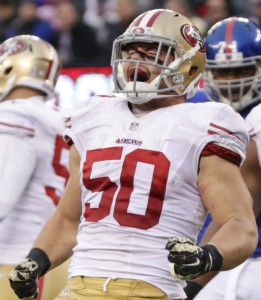 Wait a minute!  Do you mean to tell me that it took an otherwise, irrelevant 24-year old to remind us the league is facing a concussion crisis?  Shouldn’t Roger Goodell be doing this daily?  Or is he too busy revisiting his league’s “conduct policy?”

While San Francisco 49er linebacker Chris Borland showed promise as a rookie, he wasn’t exactly a household name.  Until now.  That’s because he is the latest individual to remind us that the NFL is a violent game, as if we didn’t know that already.

Google Chris Borland today and you’ll get 6,000,000 hits.  Ironically, it’s the next hit he’d take that prompted his retirement.

Honestly, unless you lived in either Madison, Wisconsin or San Francisco, California, you probably had never heard of Borland prior to yesterday’s announcement.  The former NFLer would have been a second-year linebacker out of the University of Wisconsin had he stayed in uniform.  Instead, the NFL is in his rear view mirror, unless of course… showing a deep concern about where his league is headed, Commissioner Goodell assigns Borland to some cushy post designed to research ways to make the league safer.  It’d make for great publicity.

But that won’t solve the problem.

The list of retired NFL players that have suffered brain damage and correlated CTE (chronic traumatic encephalopathy) continues to grow.  We didn’t need Borland’s announcement to remind us how dangerous the game is.  This is something the NFL needs to address daily before the sport runs out of players willing to play it. 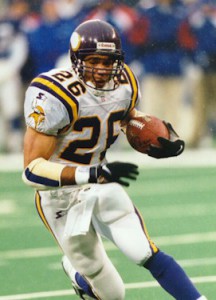 Do you remember Robert Smith?  You should.

Robert Smith was one of the best running backs around.  He graduated from the Ohio State University and was selected in the first round by the Minnesota Vikings.  After playing eight years in the NFL, Smith was due to make huge money but instead decided to retire.  Why?  Because he wanted to be able to walk when he was done playing the game.

Saying the NFL is a savage league is an understatement.  Anyone who puts on that uniform understands that death or at a minimum some sort of incapacitation is a distinct possibility with every snap.  It’s a crisis that commissioners long before Goodell had to be aware of but it ended up squarely on his lap with nary an answer to be found.

I don’t envy the man.  There’s no way to ensure that two, fully-padded,  350-lb. men running into each other at full speed eighty times a Sunday for sixteen consecutive Sundays don’t risk injury.

Borland realized that.  He heard names like Dan Duerson, Junior Seau, Jovan Belcher and many, many more and it scared him shitless.  Understandably.

Ask yourself.  If you were a giant, athletic human being, would you risk your life, or run the risk of shortening it, for millions of dollars?  That’s what every NFL player asks themselves every time they step on the field.

Chris Borland no longer has to do that.  It might not be long before others follow in his footsteps.

11 thoughts on “Much ado about noggins: 49ers’ defensemen leaves league for healthier pastures”