“A fool and his money are soon parted”

If I’ve learned anything from gambling on the NBA these past few days, it’s that this year’s Assocation boasts some REALLY bad teams.  And I mean BAD.  Stinkeroos.  Teams that go on the floor and lay one big, fat Easter egg.  For these teams, losing by fifteen to twenty points a night has become standard practice.

The Magic, Lakers, Timberwolves, Knicks and Sixers are so atrocious they’re double-digit underdogs every night and still can’t cover the spread.  Even the most ardent fan must cringe when buying a ticket to see these guys play.  A night home with a good book and a chocolate bar would be more entertaining… and considerably cheaper. 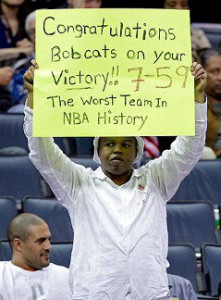 Every year, when teams are on a pace to break the record for worst team ever, ESPN spotlights their pace.  For years, the 1973 Philadelphia 76ers were the team most associated with futility.  They finished with a record of 9-73.  Can you imagine?  Every win must have felt like a holiday.  That shameful record held up until just a few years ago when the Charlotte Bobcats finished the hold-out-shortened season at 7-59.  That’s right.  They won just ten percent of their ball games.

The worst teams in the NBA this year might not be historically bad but they’re pretty awful.

I like to consider myself a knowledgeable NBA fan, familiar with most team’s rosters but the majority of these players I couldn’t pick out of a lineup.  With Kobe Bryant out for L.A. and Carmelo Anthony out for New York, how many of the Lakers’ and Knicks’ starters can you name?

Wednesday night, in their 21-point home loss to the New Orleans Pelicans, the Lakers started Ryan Kelly (a rookie, second round pick from Duke), Tarik Black (a second year player from Memphis, Kansas and the Developmental League), Wesley Johnson (unfortunately for them not Wesley Person), Jordan Clarkson (a rookie who sounds like he came out of the American Idol league) and the once popular, Harvard sensation Jeremy Lin.  Lin’s in his fourth year in the league.  That means the entire Los Angeles lineup that night didn’t have the combined experience of Tim Duncan.

Understandably, the Lakers are 20-54.

That very same night, the Knicks gave the Brooklyn Nets, a playoff team, a run for their money but still started a bunch of guys you haven’t heard of.  Andrea Bargnani was the top pick back in 2006 but outside of Anthony Bennett, Greg Oden and Kwame Brown, he’s been the worst #1 pick this century.  The Knicks also started Lou Amundson (who has a pony tail), Lance Thomas (a third year Dukie who’s averaging seven points per game), Langston Galloway (a 23 year old whose name is well… Langston) and Shane Larkin, the Knicks first round pick who they’re hoping can have as successful a career in the NBA as his father had in Major League Baseball.  Off the bench, the Knicks brought in Jason Smith, Cleanthony Early, Quincy Acy and Ricky Ledo, four guys that couldn’t land a seat in a crowded Manhattan restaurant.

The Knicks are 14-61 and have lost their last eight games. 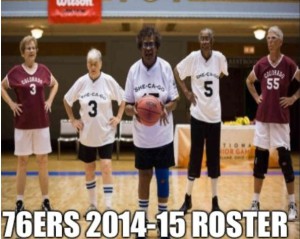 The rebuilding Orlando Magic is 22-53.  Their players are so young they get carded walking into the arena.  They’re the fourth youngest team in the league.  (The Sixers are first.)  Someone might want to tell these general managers that a little veteran presence goes far.  After all, the San Antonio Spurs did win last year’s NBA championship.  Speaking of the Spurs, they just beat the Magic by twelve points in a game that wasn’t even that close.

And then there are the Minnesota Timberwolves who have lost their last five games by 12, 10, 22, 20 and 14.  Seriously, are these guys even trying or are they just that bad?  Wasn’t the return of an aging Kevin Garnett supposed to breathe some life into this team?  Sure, the Wolves start Andrew Wiggins, last year’s top pick and potential savior of the franchise, but he’s playing alongside Adreian Payne, Justin Hamilton, Lorenzo Brown and Zach Levine, four more guys you’ve never heard of. 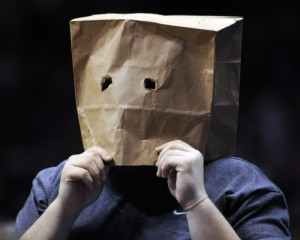 What happened to the NBA and its batch of young talent?  Where are all these unheard of names coming from and does it bode well for the future of the league?  It’s easy to suggest that the NBA contract but that’s no solution.  Even if it’s bad basketball, at least these cities boast teams that offer its populace something to do on a weeknight when there’s nothing else around.

Barring any potential miracles, these five teams will be just as bad next year as they are this year.  The Lakers have one year left with Kobe Bryant.  The Knicks are bogged down with that ridiculous Carmelo Anthony contract.  And there’s no magical potion that can possibly make the Sixers, Magic or T’Wolves relevant within one year’s time.

So grin and bear it, gang.  If you’re a fan of these five teams, you may want to practice patience for you’re not going to be relevant for a long, long time.

Oh, and you might want to be careful wagering on them as well… unless you’re taking them to lose.