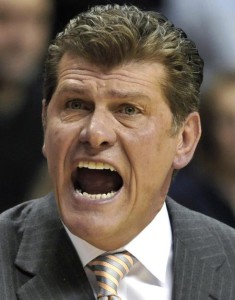 When Geno shouts, people have no choice but to listen

Geno Auriemma has never been one to keep his opinions to himself.  The current coaching king of women’s college basketball recently called the men’s game “a joke.”

He claimed the game is behind the times and lacks any consistent offense to keep fans engaged.  And he didn’t even mention the “one-and-dones.”

Wisconsin head coach Bo Ryan voiced his opinion on college basketball immediately after his loss to Duke in the championship game.

Clearly still disappointed with the outcome of the game, the 70-year old Ryan said his program doesn’t succumb to the temptation of the “rent-a-player” and that they build from within, an obvious shot at the man who had just coached against him, Mike Krzyzewski.  Coach K’s not the only one who recruits “one-and-dones.”  Kentucky’s John Calipari is the man most known for doing so these days.  It’s what college basketball has become, a quest to find the most talented players who might not stick around.  Are head coaches at fault for not encouraging kids to stay in school longer or are they just keeping in line with the way the game has evolved… for lack of a better word.

First of all, let’s clarify a few things before we move on.  Of course, Bo Ryan doesn’t do one-and-dones.  He coaches at Wisconsin which is not exactly a hotbed for NBA talent.  Quickly, name Wisconsin’s best NBA player ever.  You can’t, can you?  The answer is Michael Finley.  ‘Nuff said.  No disrespect to either Coach Ryan or his program but someone should probably remind him he coaches at Wisconsin. 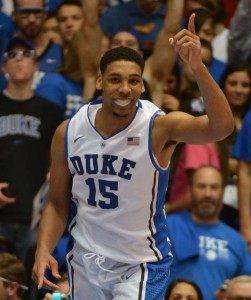 Furthermore, I call hypocrisy.  If someone with the innate talent of a Jhalil Okafor went up to Bo Ryan and told him he wanted to play at Wisconsin but was only going to stay for a year or two, would Ryan turn that student down, knowing that he’d probably take them deep into the tournament while simultaneously earning the program millions of dollars and probably garnering Ryan a raise in the process?  I think not.

I get that an embittered Ryan was upset about the loss.  It wouldn’t surprise me if an apology was on the way but don’t blame Coach Krzyzewski or Coach Calipari for playing the game.  Blame the system.

There are two divergent schools of thought with regards to the modern state of college basketball.  One is that it’s doing just fine.  The other swears the sport is in a state of disarray.

How does this guy still look the same twenty years later?

I’m not sure I need more scoring in my game as Auriemma suggests, although I wouldn’t mind seeing better shots taken and fewer fouls called.  Nor am I offended by the fact that college kids use the system to launch (or at least attempt to launch) their careers in the bigs.  Such is life.  For every Tim Duncan who attended four years of college and went on to have a Hall of Fame career, there are four-year players that have flopped.  For every player who attended a year of college and had success in the pros, there are countless others who barely got to suit up.

The NBA and NCAA discuss annually whether to mandate an extra year of college ball.  That agreement will likely pass in the near future.  Or it may stall.  Who are we to tell a kid what he can and can’t do if he wants to earn a living and has the skill set to do so?

What I do know is that, near the end of the tournament, I saw two really good games.  I saw good shots and bad, decent defense and matador.  I saw a Wisconsin program take down John Calipari and his merry band of N-bomb dropping All-Americans.  I also saw Wisconsin come close to beating a pretty solid, yet very young, Duke team.

Ultimately, talent won out.  It always does.

Personally, I don’t care whether the players I’m watching are 18 or 22.  I care whether they’re good.  If Jhalil Okafor wants to jump to the NBA, he should have the right to do so without us griping over whether it’s right or wrong.  In the NBA, there will always be demand for a kid that is 6’11 and 270 pounds, regardless of whether he’s wet behind the ears. 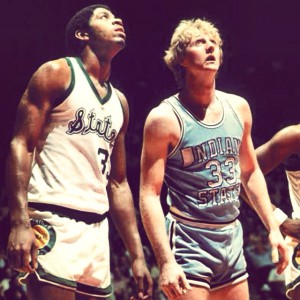 Those were the days.

With regards to the quality of play, fans are still watching.  This year’s Final Four ratings were up 40% from last year.  Kentucky-Wisconsin peaked at a 16.4 and had Kentucky not lost that game, I would dare to guess that a Duke-Kentucky championship game would have been the most watched since Magic’s Spartans faced Bird’s Sycamores back in 1979, a game that to this day remains the highest rated college final game ever.

I had a discussion with Dr. Milhouse right before the Duke-Wisconsin game.  He suggested there should be some sort of name to describe the revisionist history that overtakes us when reminiscing about how everything was so much better back in the day, the “I used to carry a block of ice up five flights of stairs” syndrome.

College basketball would be SO much better these days if it weren’t for these meddling kids.  Zoinks!

I’m open to any legitimate suggestions that might make the game more entertaining but there’s no denying that March Madness is still three of the most exciting weeks in sports.  Tens of millions of us still turn in brackets that end up embarrassing us in a week’s time.  The Holy Grail perfect bracket has yet to be completed.  Despite our complaining about rent-a-players and missing the way the game “used to be,” college basketball continues to thrive in spite of itself.  Recent television ratings prove that.

As long as there is talent, passion and drama, we will watch.  We are sports fans and that’s what we do.

14 thoughts on “Old school, new school and the differing schools of thought on the state of college basketball”