I was once in a relationship for ten years, which in all fairness lasted about six years longer than it should have.  In its final days, things had gone sour.  Despite living together, we had grown apart.  Goals differed; disagreements had become far more frequent.  With passion long gone, the relationship had run its course.  We did the right thing and parted ways. 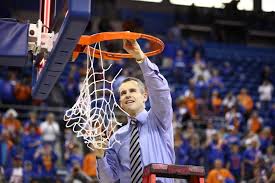 Billy Donovan has been in Gainesville a lot longer than ten years.  Try doubling that, which equates to almost half his life.  Donovan first arrived in Gainesville in 1996.  While he didn’t put Gator basketball on the map, he certainly took it to the next level.  Norm Sloan and Lon Kruger both had success before him but it wasn’t until Billy the Kid trotted into town that back-to-back championship banners were hung.

I was living in Gainesville at the time, going to a fair amount of games the years they won those two titles.  While Joakim Noah, Al Horford and Corey Brewer were all dunking on people’s heads, I remember telling a friend “Enjoy this while it last for it will never be this good again.”  Unless your name is Mike Krzyzewski, winning one national championship is difficult enough.  Look at Wisconsin’s Bo Ryan for instance.  He’s 70 years old and just coached for his first national championship.  At 49, Donovan already has two.

He won’t be getting any more, at least not any time soon.

Let that sink in, Gator fans, and when you finally do, it might also help to realize that change is good. 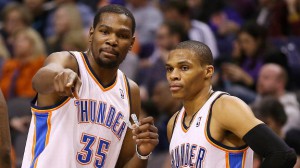 Set your egos aside and understand that Oklahoma City was the better job.  The opportunity to coach both Kevin Durant and Russell Westbrook proved too tempting to pass up.  No more endless recruiting trips or silly NCAA rules.

But this is no sure thing for either Billy D or the Thunder.  Both Durant and Westbrook have contracts that expire soon, which means if they don’t vibe with Billy the Kid, Donovan could be stuck in OKC with just his Munster in his hand.  The Western Conference is not for beginners and Donovan has zero NBA head coaching experience.  It’s not like college coaches jumping to the NBA have a long history of success.  It’s a different game altogether, even if you are lucky enough to coach two of the most talented players in the league.  I understand that the Thunder wanted a fresh face but as good as Coach Donovan is, the recently fired Scotty Brooks did take the Thunder to an NBA Finals.

By the way, I take back what I said earlier.  Donovan actually has coached in the NBA before… for a day.  He never even made it to the arena.  Realizing he had made a mistake, he high-tailed it back to Gainesville leaving the Orlando Magic, the team he agreed to coach, high and dry. 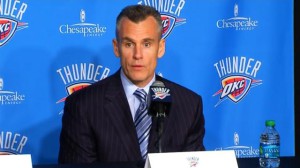 This was in 2007.  The NBA suspended Donovan, disallowing from having any further negotiations with the league.  That suspension has passed.  So has his time in Gainesville.

Half of Gator Nation panicked when they heard the announcement.  They didn’t see the writing on the wall.  How could life ever be the same?  Those are probably the same Gator fans stuck in relationships that lasted too long.  All good things must come to an end.   All bad things too.

While Donovan took the Gators to a Final Four two years ago, the fourth of his tenure at Florida, last year’s disaster of a team finished 16-17.  It was the first time this century a team he coached didn’t win 20 games.  Something had happened.  Donovan had lost his desire.

The search for Donovan’s replacement is underway.  Several names have already surfaced.  They won’t be Billy Donovan and we shouldn’t expect them to be.  However, they will bring a fire and a passion that had been missing.

Yes, there will be change.  And that’s a good thing.

12 thoughts on “Billy the Kid heads west to Oklahoma City”