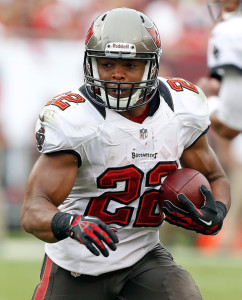 The Tampa Bay Buccaneers have a running back on their roster.  His name is Doug Martin.

A few years ago, Martin looked like he might be the tailback of the future.  In 2012, his rookie season, Martin played in all sixteen games and rushed for nearly 1500 yards.  Fantasy football owners scrambled to draft him once news broke that the Bucs had found their man.  A late first round pick for Tampa Bay, Martin had become a steal.

Then reality set in.  He played in only 17 games the next two years, not coming close to amassing the yards he did in his rookie season.  He rushed for 45 yards a game last year.  Three years ago, he was averaging twice that.

This season, Martin will once again vie for the starting spot.  The only problem is he doesn’t like his nickname.

Somewhere along the lines, someone dubbed Martin the “Muscle Hamster.”  Personally when I first heard the nickname, I thought it fit.  Martin is 5’9” and 215 lbs., most of it muscle.  He runs low to the ground and, when on his game, is a bear to bring down.  Not to mention that he kind of looks like a hamster.  So muscle hamster stuck.

Except he doesn’t like it.  He’s been trying to shed the nickname for years now and it just won’t go away.  I get that the Muscle Hamster isn’t a cool nickname like the Truth or the Answer or Sweetness but it’s still a nickname and it’s not all that bad… as long as Richard Gere doesn’t get a hold of you.

Years ago, they were trying to come up with a nickname for D-Wade.  He was quickly becoming a South Florida icon.  I forget who was putting that on, whether it was ESPN or the Miami Heat or the Miami Herald but they ended up settling on Flash, a name that his teammate Shaq had dubbed him.  The whole thing though just seemed contrived.  What’s wrong with just calling him D-Wade or better yet, Dwyane.  If the guy hasn’t been given a nickname after years of dominating high school, college and pro ball, then perhaps it just wasn’t meant to be. 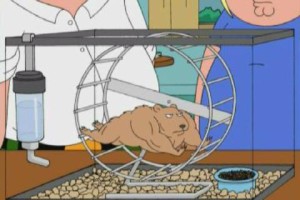 I have a message for Mr. Martin aka the Muscle Hamster.  Embrace your nickname.  You’re lucky we’re even talking about you in the first place.  The fact that you have a nickname means you’ve earned it.  It’s not derogatory.  It’s complimentary.  You’re like a jacked-up hamster in a cage running over everything in your way and the wheel just keeps on spinning.

Some guys go their entire lives without a nickname.  Be happy it’s not Dufus or Fatty or Dipshit or worse yet… unemployed.  DeMarcus Cousins’ nickname is Boogie and we don’t hear him complaining.  Worry less about your nickname and more those guys lined up against you trying to bring you down.

So suit up, earn your carries and get back to the form you were in back in 2012, muscle hamster.  Everything else will fall into place.

16 thoughts on “You don’t get to pick your nickname”