Dear God, help us all.

The world as we know it is crumbling all around us with people literally knowing nothing about sports.  I can see I’m going to have to start handing out more business cards. 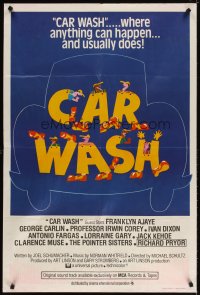 Last Sunday started off as any another, peaceful weekend day sans work.  I was getting my car washed, about to partake in my fun day festivities when it happened once again.  And to think, I just wrote one of these damn sports snobbery pieces a little while ago.

As I’m sitting there minding my own business, some absolute ignoramus starts going off about sports unintelligibly.  To make matters worse, his entire conversation was directed at some poor, unassuming pregnant lady who probably couldn’t give a shit what the hell this guy was talking about.

I swear this really happened.  Gentlemen, please listen carefully to this invaluable lesson about life and do… not… repeat.

My local car wash has a waiting room.  In the middle of this waiting room is a television for customers to enjoy while they pay others to do a job they could easily do themselves.  On the TV this particular afternoon, ESPN was re-airing it’s 30 for 30 episode on the Fab Five, Michigan’s uber-talented basketball team that never won a championship yet still changed the game as we know it.

For the unfortunate five to ten minute span that I was stuck in the waiting room, they just happened to be showing the climax of the episode: Chris Webber’s infamous time out.

That’s when a guy sitting to my left opens his mouth.

The guy proceeds to go over the end of the game, play by nauseating play, shouting while doing so, to what appeared to be his wife who was sitting in between us.  How she hasn’t already filed for divorce is even more amazing than Chris Webber not knowing he didn’t have any time outs left.

The gentleman continued.  “I remember this night!  I was watching this game,” he blurted for everyone in the room to hear.  Really, dude?  So you mean to tell me you were watching the national championship game live?  It was only one of the biggest sporting events of the last twenty-five years.  So were about fifty million other Americans.  Congratulations on having a penis. 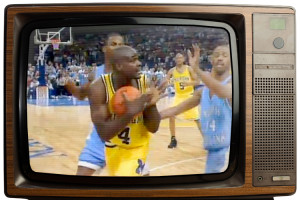 Mentioning he watched that game live would have been enough.  He really should have stopped there but then I wouldn’t have gotten a post out of the ordeal.

He then gave an entire replay of how UNC was awarded free throws after the technical foul and Webber received the technical because they were out of time outs and he called one because he didn’t know they didn’t have any and there was a coach on the sidelines who was signaling him to call one and…… Ugh.  I would have torn my hair out if I had any left.

It was the kind of moment that if you lived in an alternate universe and had a spare pair of socks balled up you would have shoved them in this guy’s mouth just for the peace and quiet… while the rest of the people in the waiting room stood up and applauded or held him down while you jammed it in there further.

He went on and on while the pregnant lady to his right, who obviously gave a flying fuck about some basketball game that was played twenty years ago, sat in complete silence, probably regretting the day he ever impregnated her.  I relayed to the good Dr. Milhouse, confidant and fellow sports snob, the gory details of my Sunday to which he astutely replied “That was twenty-two years ago.  If you don’t know by now, chances are you don’t care.”  Heck, even the baby was probably rolling over in his womb.  A timely sonogram would have shown the baby rolling his eyes and covering his cute, little baby ears.  My car couldn’t get cleaned quickly enough. 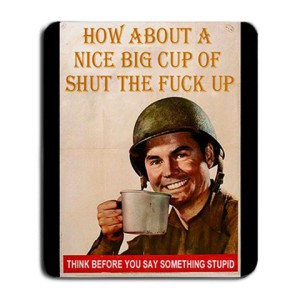 I fear for the eventual birth of this child who will be submitted to the endless and uninformed blathering of his father, who will probably still be talking to the ER doctors about the Webber time out as his kid is born.  “Doc, I really need a time out.  Can you put me back in there,” asks the baby.

Look, I’m as much of a sports nut as the next guy but I’m also a pretty good gauge of when a person is not paying attention to what I’m saying or better yet has no interest in it.

If you’re a guy, pick and choose your spots.  Know when to talk to women and people about sports.  And remember, everybody already knows about the goddamn Chris Webber game.  Perhaps you should start out with something a little more obscure.  And if, after speaking, you see they’re disinterested, shut the fuck up.

We face an epidemic in this country, my friends.  The Sports Ignorami are multiplying. Please help me stop them before they strike again.

14 thoughts on “Sports Snobbery, Episode Six: Chris Webber, the time out, a car wash and the pregnant lady who wanted none of the above”