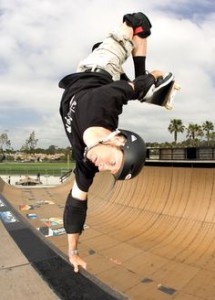 I’m 46.  On Monday, I’ll be 47.  As any of you that are around that age have probably come to understand, at this point in my life, most of my movements are deliberate.

There’s a good reason for this.

My old boss, who is a few years older than me, injured himself skateboarding not long ago.  Needless to say, he was out of commission for a while with a busted this and a sprained that.  Call me kooky but if you’re deep into the 40-plus club, unless your name is Tony Hawk, you have no business being on a skateboard.

Like I said, my movements are deliberate.  It’s not that I’m not in shape.  I am.  And looking damn good if I do say so myself.  I’m just not going to do something out of the ordinary that will put my body in harm’s way.  I’m not going to jump off a cliff, get on a trampoline (non-sexually speaking) or do anything else that might land me in the emergency room explaining to the doctor “Well, you see what had happened was…”  Heck, I don’t even play basketball anymore.

When I meet someone new and go to shake their hand, if he grabs too tightly as if he needs to demonstrate he’s the most macho guy in the universe, I pull my hand back.  I work with my hands, man.  There’s a difference between a firm hand shake and an inescapable death grip.  I don’t need any dislocated fingers just because a guy has something to prove.

My job is my livelihood.  I’m not going to do anything to jeopardize my health or my availability which is why, when I heard about the two freak sports-related injuries this weekend, I simply shook my head knowing these athletes should have known better. 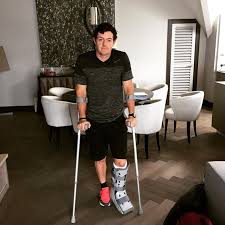 The world’s top golfer, Rory McIlroy was out playing soccer, which is understandable.  He’s a Brit and Brits play soccer.  Badly but they play soccer nonetheless.  Apparently, during said soccer match, Rory ruptured a ligament.  His foot is now in a boot.  This is a man who a) would have been defending two major golf titles in the coming months and now won’t be able to and b) made $48 million last year, $16 of that from golf.  Sure hope that was a good game of soccer.

New York Giants linebacker Jason Pierre-Paul was celebrating the Fourth of July like any good, red-blooded American… until a firework went off in his hand, blowing off one of his fingers.  Now, linebackers don’t necessarily need their fingers but it’s always better to have ten than nine.  The Giants were allegedly going to offer him a $60 million contract.  That offer, according to NFL.com, is now off the table.  No word as to whether they’ll counter offer with nine-tenths of the same deal.

Remember when Mets pitcher Bob Ojeda sliced off a finger while gardening?  I understand wanting to keep your yard in shape but you’re a damn millionaire!  Put the sheers down and pay someone to do your gardening for you!  Or better yet, the produce section of your local market is generally injury-free.

Remember when Jay Williams went on that ill-fated motorcycle ride?  It ended his career.  That’s why they have these sorts of stipulations built into an athlete’s contract.  They’re not only there to protect their investment.  They’re designed to ward off stupidity.  Like my good friend J-Dub says, if only common sense was a little more common.

Look, it’s your life.  Do as you please.  If you want to go cliff-diving, bungee-jumping or running with the bulls, go right ahead.  Just understand the consequences of your actions.  Be prepared to not only lose a lot of money and perhaps a finger but also face the wrath of our ridicule if, or more likely when, things go awry.