“I’ve become what I despise.”

After all these years, I’ve finally given in.

I don’t know how many times I’ve written about how much I don’t care for fantasy football.  In fact, my “Woman’s Guide to Coping with Fantasy Football Addicts” piece, originally published in Campus Talk magazine many moons ago, predates this very website. 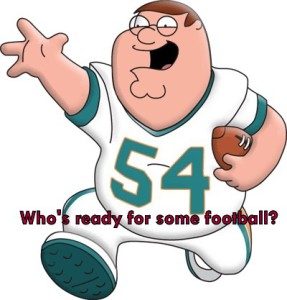 In a nutshell, I’ve just always felt that fantasy football takes away from cheering for the teams we grew up rooting for.  It individualizes a team sport.  Don’t get me wrong, I love football.  I’d just rather wager outright on the games themselves.  Not to mention that from September to December you see nothing but seemingly, mature individuals obsess about the importance of a second string kicker.  It overwhelms every conversation, a nation of addictive personalities talking about a team that doesn’t even exist.

I had always considered myself a man of more substance.  For all intents and purposes, fantasy football leagues are comprised of chicken wing-chewing, trash-spewing, waistline-busting Neanderthals who, deep down inside, think they could run a football team better than the general managers who are paid millions to actually do so.

Well, this year, consider me one of those Neanderthals.  Me like-um football.

When the Ice Cream Man and his cast of stoners, er… young urban professionals asked me to join their fantasy league, I gave in to temptation.  Consider it my moment of weakness.   Believe it or not, this will actually be the first time I’ve engaged in fantasy football for money.  I’ve participated in some minor Yahoo leagues for fun over the years but I generally lose interest (ADD) or forget to check my lineup (CRS) after Week Three.  I mean, one does have a life.

This time around, with some relatively serious money on the line, I’ve succumbed to the same societal demands of fantasy foolishness that draw over thirty million fans a year.

So I decided, If you can’t beat ‘em, join ‘em, right?  Besides, these are a pretty cool bunch of guys. 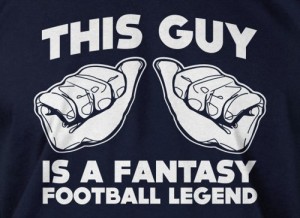 I solemnly promise not to become that person who bores you with how many points his lineup earned that week.  We have more important things to talk about.  But I am asking for your help.  After all, I have an army of knowledgeable sports readers to pull from.

I need some fantasy tips, people, and some quality advice.  Aside from doing whatever I can to draft Andrew Luck (do you think liquoring up the Commissioner will work?), what are some draft tips I should employ to prepare for a lucrative season?  While healthy trash-talking is always fun, I’m still in this to win this.

I understand the general principles behind drafting a well-rounded roster but what are some other helpful hints I should be aware of?  Help me out, gang.

And when it’s all said and done and I’m standing on the podium at the end of the season, I promise to represent SportsChump Nation proudly…. with a trophy in one hand and a half eaten chicken wing in the other.