Coaches liquored up on Fireball kick it up a notch.

You’ve probably heard by now that USC Head Football Coach Steve Sarkisian had one too many cinnamon whiskey shots at a pep rally recently, then stepped to the podium and told a crowd of probably equally liquored up USC fans to “Fucking Fight on, baby!”

“That’s fuck-ing with a capital F, bay-beee,” says I in my best Dickie V impression.  I don’t recall Knute Rockne ever using that same motivational speech, probably only because they didn’t have Fireball back then.

Sarkisian is not the first college coach to tip back a few and do something stupid.  Remember Larry Eustachy?  The former Iowa State Cyclones basketball coach was photographed at some keg party with college co-eds half his age.  I guess that sort of thing is frowned upon in Ames.

Look, I’m not here to come down hard on Sarkisian.  I’m pretty sure the boosters, AD and every politically correct media outlet this side of ESPN have already done that for me.  I’ve had my fair share of drunken nights and done a few things I’m not proud of so I’d just be the pot calling the kettle Fireball.  The guy’s a head football coach of one of the biggest college programs in the country.  He doesn’t need me to tell him he fucked up.

Instead, I thought I’d take a different approach. 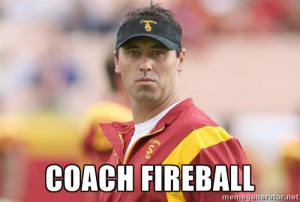 If you’ve ever been in a bar before, you know that Fireball is one of the most commonly ordered shots.  Its success is a relatively recent phenomenon.  Within the last several years, it has skyrocketed to become many Americans’ first, second and third steps on the long and stumbling road to bad decision-making.  Fireball is weaker than your average whiskey but don’t tell Coach Sarkisian that.  He thinks he had himself a nice buzz.

Since the Most Interesting Man in the Universe has been used to sell Dos Equis and Carl’s Jr. used that drunken David Hasselhoff video to sell cheeseburgers, I thought Fireball could take advantage of this (cardinal and) golden opportunity to market their product.

To honor Coach Fireball’s bad decisions, I’m hosting a little contest and putting you directly in the liquor company’s boardroom.  The reader who comes up with the best Sarkisian-related slogan that Fireball should use to promote their product will win one hearty shot of cinnamon whiskey on me.  You just have to come to my bar to get it.*

12 thoughts on “Steve Sarkisian and Fireball Cinnamon Whiskey: A marketing match made in heaven”