I tend bar in Ybor City (pronounced EEH-bor) and have on and off for over six years. 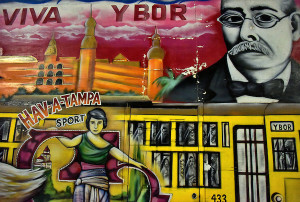 Like any part of this beautiful country of ours that is known for its nightlife, Ybor City has its issues.  We had another one recently.

Ybor City is one of Tampa’s most popular tourist attractions.  People come from all over the country to stay in the area because they always know there’s always something going on: great food, active nightlife and a culture all its own.

Ybor City is steeped in tradition, families of Italian, Cuban and Spanish heritage dating back for generations.  Years ago, the area evolved into a night time fun spot with bar after restaurant after nightclub lining the storefronts of 7th Avenue.  It is an identity with which Ybor initially struggled but investors eventually realized the revenue generated by partygoers was too real to turn down.  Still, Ybor insists its venues stay true to the heritage of the district.  Most do.

For those who have never been, Ybor City has a mini-New Orleans feel, an area whose multiple cultures mesh to create its own unique hodge-podge.  And like New Orleans or San Francisco or New York City or any other area where people walk the streets and drink to excess, stupid things happen. 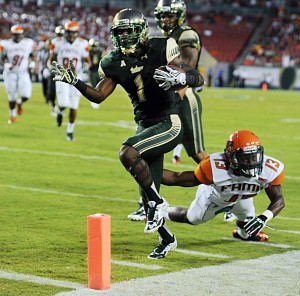 After opening weekend and a successful USF 51-3 victory over FAMU, a number of players went out in Ybor City to a club called the Orpheum to celebrate.  This club is blocks from where I work.  This gathering was not sanctioned by the university but current and former South Florida players were in attendance.

One of those players was former lineman Elkino Watson.  Watson was stabbed to death that evening in a parking lot near the nightclub.  Allegedly Watson saw another male strike a female inside the club.  Details are sketchy but the bottom line is that Watson ended up dying from multiple stab wounds: another black eye for Tampa’s most historic vacation destination.

To make matters worse, USF head football coach Willie Taggart, clearly upset that one of his former players was murdered in the melee, publicly banned his team from hanging out in Ybor City, calling the area “off-limits.”

Here’s where things get complicated.

We’ve talked a lot lately about accountability.  We’ve also talked about people in high profile positions saying things they shouldn’t.  This is a perfect example of both.  I get that Coach is grieving but blaming an entire area for the loss of one of his athletes was wholeheartedly irresponsible, not to mention bad business considering how many local business owners financially support his program.  Several Ybor City spokespeople responded resentfully to Coach Taggart’s passionate yet ill-advised comments.  I know one bar owner in particular that is livid with the way this whole thing has been handled.

I have safely walked the streets of Ybor City for seven years without incident.  It is not a war zone.  Sure, some drunken sot might bump into me on occasion but that’s because HE’S had too much to drink not because Ybor City has one bar too many. 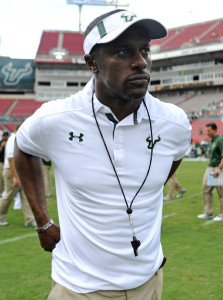 USF’s Athletic Director rescinded Coach Taggart’s comments, realizing it best not to bite the hands that feed them.  Even Taggart has since apologized, probably under direct orders to do so.

Even in his grief, Taggart should have recognized that his comments were short-sighted.  At a minimum he could have kept his restrictions in house like every other locker room in America.  Suggesting his players not go to Ybor is as ludicrous as any proposal to build a wall along the US-Mexico border.  It ignores a larger problem by pretending it does not exist.

Call me old-fashioned but I’d like to see the buck stop somewhere instead of the never-ending blame game… or better yet we could always stop shooting and stabbing each other.  That’d be nice.

What is tragically lost in this war of words is that a young man died standing up for what he believed in.  A pissing match between coaches, athletic directors and restauranteurs is no way to honor this kid’s legacy.  I’m pretty sure Watson’s family could give a flying leap about whose feelings are hurt.

Moving forward, one can only hope we’re able to sift through the nonsense and communally do our best to ensure things like this don’t happen again.

Or maybe I’m the one who’s misguided.