“The bat handle, for not more than 18 inches from its end, may be covered or treated with any material or substance to improve the grip.  Any such material, including pine tar, which extends past the 18-inch limitation, in the umpire’s judgment, shall cause the bat to be removed from the game. No such material shall improve the reaction or distance factor of the bat.”

Disco was dissipating, a new wave was beginning, Bill Cosby overtook the airwaves for a different reason and there was only one Batman. 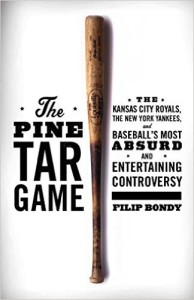 Baseball was simpler too.  Baseball cards were still worth something, nobody knew what PED stood for and hitting forty home runs in a season was a rare accomplishment worth celebrating.

There was no social media and the only skeptical sports coverage was what you read in the following morning’s newspaper.  But that didn’t stop one incident, one home run turned into an out, from turning one of the game’s most respected players into a raving lunatic and giving us a moment that lives on in infamy.

That one incident, The Pine Tar Game, is the subject of Filip Bondy’s latest creation.

But this work is not just about a bat and a decision.  Bondy takes us back to the late 70s and early 80s by setting the tone for that game and what it meant for baseball history.

“The story begins, as all the best ones do, with a bat and a ball,” back when the Yankees payroll was only $13 million, half of what A-Rod makes now.

The rivalry between the Yankees and the Royals is now forgotten but back then it was a heated David and Goliath battle between what Bondy calls “two polar opposite franchises.  The smaller-market teams were just freckle-faced kids with no real weaponry… but the upstart Royals were at the time a very real threat to the haughty supremacy of the pinstriped empire.” 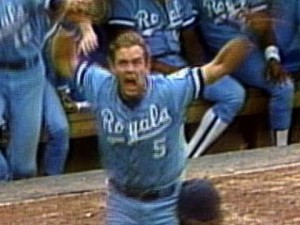 Bondy’s book effectively chronicles the competitive buildup between the two clubhouses and a moment in baseball’s history that has stood the test of time.  George Brett is accurately portrayed as an all-time great, a likeable guy, just one with a short fuse, “a seething bull in a china shop.”  Watching him soar out of the dugout is one of baseball’s unforgettable images, something that we’d probably view entirely differently if it happened in this day and age.

Never was a game between two fourth place teams as memorable as the one played on July 24, 1983.  Thanks to Bondy, we get some good insider trading on how it all went down.  “George Brett knew about the pine tar, and he had a fairly good notion about the rule, so there may have been some cold-blooded calculation involved in the unlawful use of this bat, even if the crime was ultimately petty.”

In the ninth inning of a mid-summer ballgame between two teams all but out of contention, one of the game’s most famous home runs was hit, pitched by one Hall of Famer and slugged by another.  That’s when Billy Martin left the Yankees dugout to protest.  “From then on, everything was different.  All sanity left the building.”

Even though everything went down in accordance with the rules, after reading “The Pine Tar Game,” one can’t help but think what a mess we’d make of it if it happened today.  With the dust still settling from the DeflateGate scandal, would Brett and the Royals, like Brady and the Patriots, be able to shake the cheater moniker if they went into a game knowing the equipment he was using was in violation of the rules?

It’s good food for thought.  As is the book.