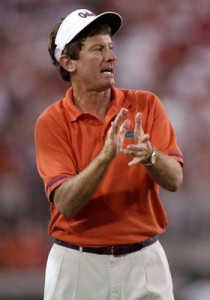 Not that the Ol’ Ball Coach needs any confirmation from yours truly but do you know how I know Steve Spurrier was a great coach?  Because everybody I knew that wasn’t a Florida Gator fan absolutely despised the guy.

Ask any Seminole, Bulldog, Volunteer or anyone with any allegiance to a school that Spurrier once scored 50 on and they’ll confirm that story with vigor.

Steve Spurrier got (back) to Gainesville in 1990.  As a student who arrived at the University of Florida only two years earlier, we had heard the name before.  Football was big in town.  Spurrier was about to make it bigger.

Anyone who was enrolled in Florida at the time witnessed a changing of the SEC guard.  Goodbye ground and pound, the Fun and Gun had arrived.  Almost instantly, Spurrier put Florida football on the map.  SEC championships became as commonplace as SEC losses were rare.  Florida-Florida State replaced FSU-Miami as the most watched rivalry in the state, if not the nation.  Florida-Tennessee was put on the map and Florida-Georgia fell of it because Spurrier’s Gators lost to them only once in twelve tries.

Steve Spurrier was a visor-throwing brat when things didn’t go his way.  There was no two ways about it.  He definitely had a little John McEnroe in him.  But, like McEnroe, he won.

Spurrier was also a great soundbite, the mouth that roared.

When asked about an Auburn library burning to the ground, he said the real tragedy was that not all the books had been colored yet.  When asked about Peyton Manning returning to Tennessee for his senior season, he quipped that the kid really must like playing in the Citrus Bowl.  And then, of course, there was Free Shoes University.

Only Spurrier, a coach most aptly named.  If you’re going to get away with jabs like that these days, you better win.  And Spurrier did just that no matter where he went.

The guy won an ACC Championship at Duke.  He took South Carolina to the SEC Championship game.  He nicknamed Ben Hill Griffin Stadium the Swamp.

Upon his recent “resigning” from South Carolina, former players came out of the woodwork to pay their respects.  From Danny Weurffel to Jesse Palmer to Kevin Carter to Marcus Lattimore to Jadeveon Clowney, all had nothing but the kindest things to say about a man who demanded greatness out of them and usually got it. 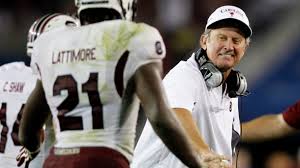 Everyone who ran into Spurrier somewhere along the way has a story to tell.  Mike Bianchi once wrote of the night he shared a hotel room with Spurrier and why, despite having more national championships (but not more conference championships), Urban Meyer could never surpass Spurrier’s legacy in Gainesville.

When you boil down the true essence of coaching, the number one goal is not how many games you’ve won but how many lives you’ve impacted.  Like him or not, Steve Spurrier did both.

And like it or not, college football will be slightly less entertaining without him.

11 thoughts on “Parting thoughts, we think, on Steve Spurrier”