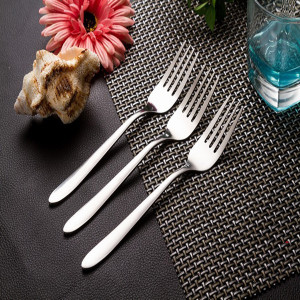 We’re going to start a new feature here at SportsChump where we celebrate the ugly by sticking the proverbial fork in it.  And in this year’s NFL, there is plenty of ugly to go around.

Even though it’s only Week 7, there are a few teams that are already playing for next season.  Some of these forks might be a bit premature but by the the looks of the way these teams are playing, I don’t think so.

So get out the cutlery, folks.  It’s time to stick a fork in ‘em.

I’ve overslept before.  I’ve been late for work and felt horrible about it.  Of course, I wasn’t an NFL quarterback where making the team flight is kind of important. 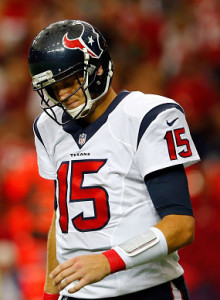 Apparently waking up on time for Ryan Mallett is as difficult as finding an open receiver.  The Houston Texans are one loss and an alarm clock away from holding open tryouts for the position.  And to think, Tim Tebow STILL can’t find a job.

Well, don’t fret, Timmy, for not even you can fix the debacle that is the Houston Texans.  Losing Arian Foster for the season, again, this time with a torn Achilles is the least of their problems.  This team is gut-wrenchingly horrible.

At one point on Sunday, they were losing to the Miami Dolphins by a score of 41-0.  No disrespect to the Dolphins but this is a team who went into Sunday’s game with a head coach who had only one game of head coaching experience.  This is a team that just gave Ryan Tannehill $96 million but hey, at least Tannehill can set an alarm clock.

Texans coach Bill O’Brien is so dead man walking, he owns the DVD.  He’s now butting heads with the GM on whether to cut Mallett.  I’ll let you guess which side of that equation O’Brien is on.  (Note: Mallett was cut today so O’Brien won that side of the argument.)  O’Brien is so miserable right now, he longs for the far easier days when he only had to answer questions about Penn State’s past.  And Ryan Mallett, who once played for the Patriots, clearly forgot everything he learned in Foxboro, or perhaps he slept through those lessons too.  Either way, he’s now looking for work.

It’s long past time we stick a fork in these Texans who are horrible yet surprisingly still in second place in their division, behind a Colts team who it’s almost time to stick a fork in as well.  In fact, the AFC South is a four-fork party as the teams in that division are a combined 8-19.

It’s a shame one of them has to win this division because none of them are worthy.

Houston, you most definitely have a problem.

Okay, so I’m overreacting.  It’s probably too early to officially count out the 2-4 Dallas Cowboys.  After all, with a healthy Tony Romo and Dez Bryant, this team would likely be competing for the division.  However, when I see a player, who has had disciplinary issues in the past, shove his coach and argue with another player on the sidelines, well, let’s just say that rarely bodes well.

I get that the Cowboys are frustrated with their current predicament.  Backup quarterback Brandon Wheeden proved unable to fill Romo’s shoes to the point where they brought in Matt Cassell who proved equally as unable.

That frustration led to Greg Hardy blowing his top on the sidelines and smacking a clipboard out of a coach’s hands.  By the way, kudos to special teams coach Rich Bissacia, a former Buc, for getting in Hardy’s face.  Bissacia is only half his size.

A still fuming Hardy pulled a page out of Drew Rosenhaus’s repertoire by going all “No Comment, Next Question” until reporters realized it was best to leave him alone. 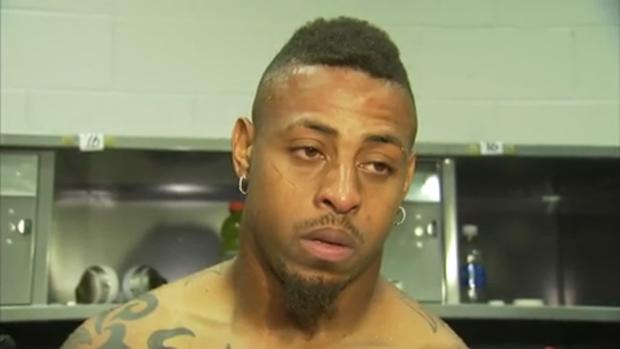 Look we get that Hardy doesn’t like to lose.  So does everybody else that’s ever put on a Cowboys uniform.  No one expects tempers not to rise in one of the most violent sports we know.  There’s nothing wrong with a little intensity.  There is, however, plenty wrong with lack of discipline.

When your name is Greg Hardy and you already have two strikes against you, it’s hard to come to your defense.    Unless of course your name is Jerry Jones who, at least publicly, has no issues with Hardy, which proves that we’re either making too much of this whole thing or Jones has lost his gourd.  I’ll let you decide which.

Don’t stick in the fork in America’s team just yet but you might want to have it out and polished.

Just when the Lions thought they had turned their season around, just when Tony Dungy somehow convinced Jim Caldwell that Matthew Stafford had a little Peyton Manning in him, the Lions go out and lose at home to the Minnesota Vikings. 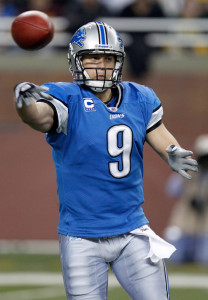 Don’t get me wrong, the Vikings (4-2) are a decent football team but if you’re the Lions, and you are desperately trying to make sure this season is not a total waste, this is a home game against a divisional rival you have to win.

After Sunday’s loss, the Lions fell to 1-6.  They might as well mail in their season.  Oh, and the fact that Jim Caldwell thinks Matthew Stafford in any way resembles Peyton Manning is clearly grounds for dismissal or at least a call to have his head examined.

The Lions have let up the most points in the league by any team not named the Jacksonville Jaguars, they are five-and-a-half games behind the Green Bay Packers in their division and that lead is not shrinking any time soon so let’s just say the fork is already deep in it in Detroit.

The Bucs did it again.  Rarely do NFL teams consistently invent new ways to lose.  Welcome to your 2015 Tampa Bay Buccaneers.  Up 24-0, the Buccaneers got conservative and allowed the Washington Redskins to launch the biggest comeback in franchise history.  This is a team that has existed since 1932.  That’s a lot of comebacks. 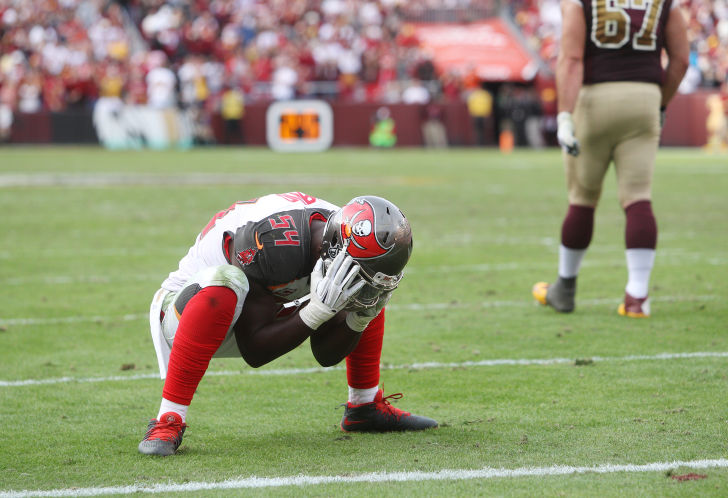 There’s nothing like making history for all the wrong reasons.

The worst part is that the Buccaneers offense actually played pretty well on Sunday.  Between penalties (16 for 142 yards), an onside kick for which they were clearly not ready and their uncanny ability to make Kirk Cousins look like Joe Theismann, the Buccaneers now reside at 2-4, in last place once again in the NFC South.  They are a full four games behind the undefeated Carolina Panthers.  At least that’s familiar territory.

Here are the Buccaneers next five games: @ Falcons, Giants, Cowboys, @ Eagles and @ Colts.  Does anyone else smell a 2-9 start?

The Bucs might win a few games left on their schedule but they aren’t going anywhere so shine up that fork.  The glass half full Bucs fan (of which there are fewer and fewer these days) sees anything over two wins this season as an improvement which, technically, it is.

8 thoughts on “Stick a fork in ‘em Sunday”