Ah, the never-ending joy of wagering on the NFL.

One thing many people overlook about the sustained success of both college and professional football is not only the excitement and unpredictability the sport brings and the gladiator-like nature of the game but perhaps most importantly, football sets up perfectly for wagering. 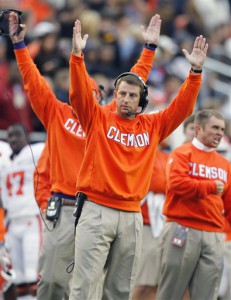 For example, I was nowhere near a sports book for Monday night’s championship game but when Clemson scored that final touchdown, while it may have seemed meaningless to the some trust me, there were literally hundreds of millions of dollars that changed hands, a lot of happy people and a lot of pissed off motherfuckers.

The spread in that game was six-and-a-half.  That final Clemson touchdown cut the lead from 45-33 (‘Bama covering) to 45-40 (‘Clemson covering).

Anyone who called that a meaningless touchdown knows nothing about the sport.

The very nature of scoring in football also allows for different types of wagering.  It’s as if the two were made for each other.  For example, if you liked ‘Bama to win big, you could have pleased your bet, buying six or so points and increasing your payback.  Of course, in this situation, you would have lost.  If you liked ‘Bama to win but not cover, you could have teased your bet down six points and in this case, you would have won, just not as much money.

Clearly, as with any wagering, there’s danger involved, particularly when you’re pleasing points.  That’s why the payout is so high.  High risk, high reward.  In doing so, and this is important, you’re taking the chance that Las Vegas is far off on their point spread which, as frequently as Vegas tends to be right, it’s also perfectly possible, in fact far more likely, that they whiff on a few games.

That’s exactly what Milhouse and I were hoping last Sunday when we pleased four different wagers, the two point spreads and the two over/unders in the NFC wild card playoff games.  And boy, were we right… almost. 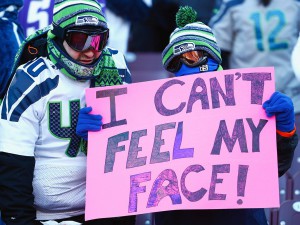 Milhouse and I were in agreement on both games.  As much as I liked Seattle to win, he convinced me otherwise by throwing a few meaningful statistics my way.  A) I had routinely underestimated the Minnesota Vikings all season long, which was correct.  B) Home playoff underdogs historically fare well and with two of them losing on Saturday, odds were in favor of the third one pulling out a victory.  And C) in perhaps the coldest playoff game ever played, anything was possible.

Since the Seahawks were favored by four-and-a-half, our six point pleaser made perfect sense.  All Minnesota had to do was win by a point-and-a-half, or basically just win the game.  We also pleased the already low under of 40 down to 34.  That seems astronomically low for an NFL football game but in this case, it made good sense.  Once word got out that the weather was going to be well below zero, Las Vegas couldn’t catch up to that number quickly enough.

As it turns out, we ended up losing the four-team pleaser when Vikings kicker Blair Walsh went laces out and missed what would ordinarily be a 27-yard chip shot.  Not only was it the shortest field goal ever missed in the final two minutes of a playoff game in NFL history, Walsh hadn’t missed one that short all season.

But here’s where things get to be a real kick in the pants, pun wholeheartedly intended.

The early game was only half of our pleaser.  In the later game, we liked the Packers (+1) to beat the Washington Redskins in a high scoring game.  So we combined the early two outcomes with Packers (-5), which hit, and pleased the over/under of that game up from 48 to 54.  Remember, pleasing is moving points in a direction you’re confident enough to wager on to increase your payout.

The Packers won that game by a final score of 35-18: total points scored 53.  Early in that game, Redskins kicker Dustin Hopkins missed an extra point, which would have made the total 54. 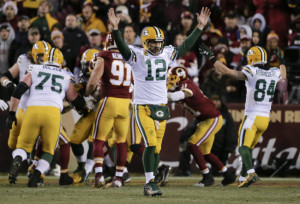 That’s right, that’s what a four-team pleaser pays out: 45-to-1.  And we missed it by two lousy kicks.

Had Blair and Dustin come through, the good doctor and I would have been popping bottles, perhaps even bought a kicker of our own with the winnings.  Of course, Dustin’s made extra point would have resulted in a push, narrowing the 45-to-1 payout down to about 17-to-1, but that’s still a hell of a lot better than losing.

I’m sure Blair Walsh and Dustin Hopkins have more important things to worry about than our slightly misguided wagers but fuck ‘em, this is my website and I’ll talk about how their gaffes affected my winnings if I want to.  If they want to start a sports blog about how their ineptitude costs their teams the game, then more power to them.

So what’s to be learned here?  I’m not here to tell you to always go with your instinct.  That’s clinically proven to work about 50% of the time.  I am here to tell you that Las Vegas isn’t always right.  Just pick and choose your spots wisely.  Pleasing bets is definitely one way to make wagering on games more exciting and make your winning ticket far more profitable.  Just understand the risk you’re getting yourself into… and the damage a missed kick can do to your day.

14 thoughts on “Kickers and pleasers: Just another Sunday wagering on professional football”