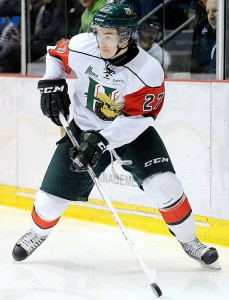 Meet Jonathan Drouin. 20 years old from the furthest reaches of Quebec. Five years ago, he was drafted to a junior league hockey team in Halifax, Nova Scotia. He made his debut for the Halifax Mooseheads at 17, and got two assists, including on the game winning goal, in his first game. He became a playoff hero that season, scoring the overtime-winning goal in Game 7 against Quebec. The next season, Halifax won the junior league championship, with Drouin leading the way.

After that season, Drouin, having just turned 18 years old, was drafted 3rd overall by the Tampa Bay Lightning. He didn’t make the team his first year, and spent another year with Halifax, going deep into the playoffs before losing in the semi-finals. The next season, he sustained an injury in training camp (a fractured thumb), so he started the year with the Lightning’s minor league team, the Syracuse Crunch, to rehabilitate his injury.

Once his thumb healed, Drouin played 70 games for the Lightning, contributing four goals, and 28 assists. He wasn’t the shining star he was in the junior leagues, which can be expected as a young player adjusts to the speed of the NHL. Drouin had a penchant for making ill-advised plays and not rushing back on defense at times. These traits caused him to sit out playoff games, when scrappy defensive play is required.

It’s a long-standing argument that jumping directly from the junior leagues to the NHL is a tough ask. Most players take a year in the minors (sometimes two), elevate their game, and slide into the NHL and take on the world. The advanced “fancy stats” of hockey bear that out, especially for Drouin. His production in 2014-2015 was subpar, and his defense was sketchy at best. Lightning coach Jon Cooper knew defense was a necessity in the playoffs. Hence, Drouin sat out the bulk of the 2015 playoffs.

Heading into this season, Drouin attempted to complete his transition to the NHL. He began playing on the top line with Steven Stamkos, and started well. The first five games of the season, he had a goal and five assists. Then, his defensive liabilities returned. He began trying to skate through double teams, making bad passes, and most importantly, not dropping back to defend. 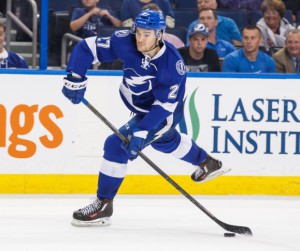 His time on ice declined, the amount of shifts he took declined, and finally…he got injured. Finally, he was demoted back to Syracuse to, ostensibly, rehab his injury. After he was sent to Syracuse, things got ugly. Drouin’s agent went public with a trade demand made once Drouin’s ice time declined in November. The media descended and every armchair GM in North America started striking deals for Drouin in their head, myself included.

This isn’t the first time that Drouin’s agent has engineered trade demands for his clients. Five years ago, Derick Brassard was in a similar position to Drouin, with the Columbus Blue Jackets. In fact, Drouin’s agent Allan Walsh has created a career out of outspoken press releases on behalf of his clients. The saga took a nastier turn on Wednesday when Drouin began to refuse to play for Syracuse, with Walsh issuing a statement saying that it didn’t “make sense” to risk injury in games before any potential trade. The Lightning responded by suspending Drouin without pay.

Now, Drouin is locked into a contract that lasts another 18 months, without pay, with a reputation that is now tarnished by appearing to demand NHL time too soon. If the Lightning do trade him, it remains to be seen if this ploy sabotages the leverage the team may have had. Or, he could be sitting on his couch for a long while, in an enforced time out to think about what he’s done.

2 thoughts on “#DrouinWatch, or How I Learned to Refuse to Play Because My Agent is an Idiot”