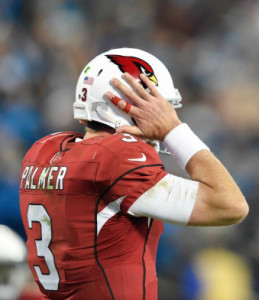 I’m going to go ahead and rag on Carson Palmer because after the Sunday he had, it’s easy pickins’.  Plus I had money on the Cardinals so I plan on getting my money’s worth.

With millions of Americans having just finished watching two of the greatest quarterbacks to ever play the game duke it out in a modern classic, Carson Palmer followed up their performances by having the worst game of his life.

Palmer turned the ball over three times in the first half, fumbling twice and throwing one interception, causing Twitter to erupt.  His problems continued in the second half, throwing three more interceptions.  Meanwhile, on the other side of the ball, Cam Newton played a nearly perfect game.

Who knows what happens to star athletes who, after having such a great season, play as badly as they’ve ever played when it matters most.  Palmer will look back long and hard at that night but not before we have a few hearty jokes at his expense.

It’s almost enough to make you feel sorry for the guy… but what fun would that be?  Here’s the best of Twitter discussing the absolute worst of Palmer.  Some of these are so good they might even give him a laugh… in due time.

Cam Newton: “Alright Carson, I’ll give you a fair chance to come back.”

Carson Palmer: “No thanks, I’m good.” 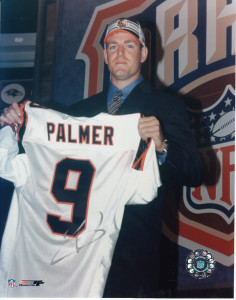 Once a Bengal, always a Bengal

You know those print outs that Peyton Manning reads on the sidelines, the ones with the opposing team’s defenses?  Carson should try that.

Being a Browns fan is like being the kid in the Panthers jersey sitting front row who doesn’t get a Cam football.

Larry Fitzgerald’s QB rating at the half: 39.5

We’ve got a QB controversy!

BREAKING: Carson Palmer just threw a towel towards the hamper after taking a shower. It was intercepted by a Panthers locker room attendant. 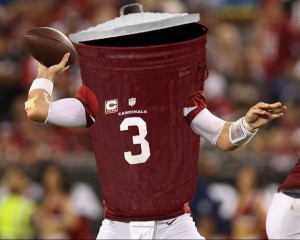 Cam Newton gives away a football to every kid in the stands.

Carson Palmer gives away a football to every defensive player on the field.

Seriously tho Carson Palmer is not the kind of guy I’d wish this game on. Feel real bad for him. Course it’d be hilarious if it were Cutler. 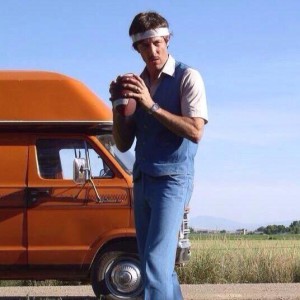 Panthers MVP for this game is Carson Palmer. #AZvsCAR

Carson Palmer has to get kicked out of the Heisman house after this performance tonight. #AZvsCAR

I think it’s safe to say that we’re all having a better day than Carson Palmer.

Carson Palmer has perfected the interception.

Carson Palmer went and pulled a Jake Delhomme tonight on us. Oh the irony.

Carson Palmer has thrown a record setting 692 interceptions in this game! 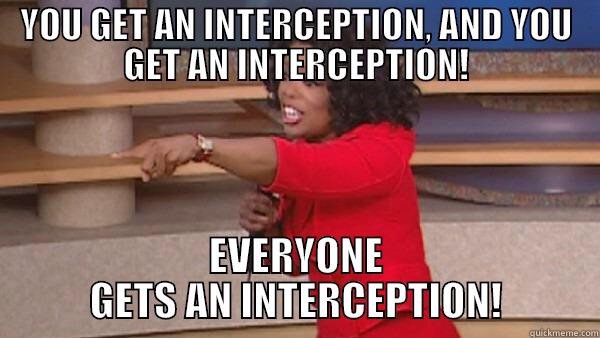 In a Scooby Doo-like ending — Carson Palmer will rip his helmet off to reveal he was Brian Hoyer this whole time. #AZvsCAR

So Carson Palmer has the #Panthers Defense in Draft Kings?