-Eminem, The Way I Am

I had an interesting conversation about sports the other day with a complete stranger.  Actually, I had met this gentleman once or twice before but our previous conversations were limited to meaningless things guys who don’t know each other generally talk about.

I can’t say the same for our latest interaction.

We began talking about sports briefly, just to break the ice.  A television in the background was tuned to highlights of Steph Curry raining jumpers from pretty much anywhere on the court he wanted.  That’s just what he does these days. 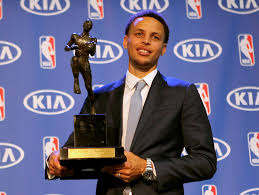 Mr. Curry is very close to becoming a household name, his bright, piercing eyes, his personable yet cutthroat demeanor, his devastating jump shot that seems to find the bottom of the net no matter from where he shoots it, Curry is on the verge of winning back-to-back MVP awards.  The product of an NBA family, Curry has far exceeded expectations.  In his seventh year in the league, he has already led his Golden State Warriors to one championship and wrestled away NBA HNOC status from LeBron James.

And like the majority of the NBA, Steph Curry is black.

After seeing a highlight reel of Curry canning jumper after jumper from here to Timbuktu, I threw out a Curry feeler, mentioning that the guy was playing out of his mind these days.

The gentleman replied that he didn’t watch the NBA.

Understanding that the Association doesn’t appeal to everyone, I retorted that if there were ever a time or a team to watch, the Warriors would be that team and now would be the time.  After all, they’re on the verge of having the best regular season ever.  For the basketball purist, they are a joy to watch, a spectacular blend of old school and new.

That’s when the gentleman replied with a single word that stopped me in my tracks. He said he didn’t watch the NBA anymore because it was too “thuggy.”

I think we all know what he meant by that comment but let’s dig into this a little further, shall we? 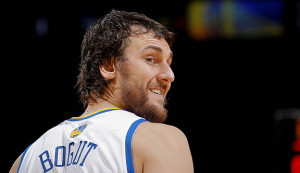 First of all, if you’ve seen these Warriors play, you’d know there’s absolutely nothing thuggy about them.  In fact, the biggest thug on the team, Andrew Bogut, is white.

My conversational counterpart then went on with the same hackneyed rant about how the league hasn’t been the same since Michael Jordan and Larry Bird retired… which was a long fucking time ago.

And while the NBA did struggle with an image issue when Allen Iverson and company brought hip-hop, cornrows and tattoos to the forefront, that was also a long time ago.  Today’s NBA is far from thuggy.   Have you seen how Dwyane Wade and Russell Westbrook dress?  Thugs generally don’t grace the cover of GQ and Esquire.

Opting for better judgment, I wasn’t about to compare the NBA’s thuggery rates to other sports but I did ask him how he felt about the NFL, a sport whose thuggery one would think far outweighs most others.  (FYI, the NHL’s pretty thuggy but I wasn’t about to go there.)  He replied that he didn’t watch the NFL either.  So exactly what sport does this guy watch in his spare time?

You guessed it: golf.

I left the conversation at that, deciding not to delve any further into this man’s predisposed notions, having already compiled a pretty good assessment where he stood on race relations.  He’s probably the kind of guy who tells you he has a lot of black friends.

Look, I’m no ambassador for the NBA and that’s not only because they wouldn’t hire me back when I applied.  But to openly suggest that the NBA is “full of thugs” and “isn’t the same as back when so-and-so played” is inaccurate at best and inherently racist at worst. 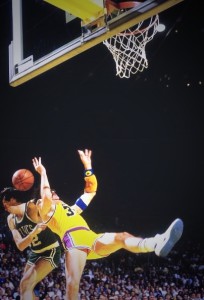 You want thug life?  Pop your cassette tape into your VHS machine and watch how many times the 1980s Celtics led by Larry Bird and Kevin McHale threw players to the ground, Bill Laimbeer too for that matter.  They just didn’t have tattoos while they did it.

If anything, the NBA is as thug-less now as it’s ever been.  I can’t even recall the last time I saw a fight in an NBA game.  After the Malice at the Palace, David Stern cleaned up the league quicker than Giuliani did Times Square.  Hall of Famer Gary Payton called today’s NBA squeaky clean and he’s not the only old-timer to do so.

The NBA is so far from thuggy, you see more fights on the baseball diamond.  Bronson Arroyo (white) sported dreads for years and have you seen the tattoos on AJ Burnett (also white)?  No one’s calling those guys thugs.  I wonder why.

Twenty years later, the NBA still struggles with an image problem which only exists because people still think it does which is fine, I guess.  The league doesn’t want those fans anyway.  And you know what?  It’s their loss because they’re missing out on some pretty damn good basketball.