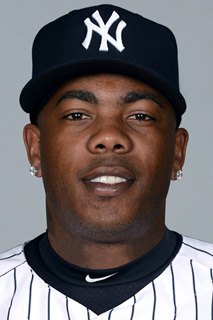 New York Yankees pitcher Aroldis Chapman was just suspended thirty games by Major League Baseball for a domestic violence dispute in which he allegedly assaulted his girlfriend.  Johnny Manziel is currently under investigation for similar acts.  Ray Rice last carried a football for the Baltimore Ravens in 2013, not because he was no longer qualified or capable of doing so but because he was caught on film knocking his girlfriend unconscious.

There have been countless other sad, pathetic and disturbing incidents of men striking women inside and out of the world of sports.  Some have been high profile; many have flown under the radar.

Professional sports leagues have taken a harder stance against such behavior, as they should.  They can no longer afford to be seen as soft on this sort of heinous and inexcusable behavior.  After all, women buy jerseys too.  Athletes who involve themselves in these crimes lose an entire fan base at best, their freedom, as it should be, at worse, potentially losing millions of dollars and the opportunity to further their craft.  It’s a small price to pay for being a dipshit.

One would think it is common knowledge, even among the most uneducated and underprivileged of souls, that domestic violence is cowardly, illegal and immoral.

So I guess my question is… why is this still happening?  Why does the high-profile athlete with millions of dollars in the bank and everything to live for continue to beat his wife? 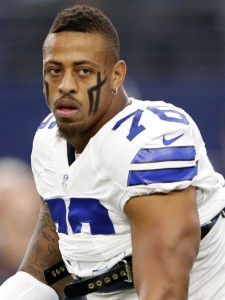 I understand that some athletes have grown up in less fortunate circumstances.   I get that people have known struggles, sadness and sorrow that we’ll never understand but I don’t see how that can ever be an excuse for putting your hands on a woman in a violent manner.  Greg Hardy is 6-foot-4, 278 pounds.  That’s an unfair matchup against anyone, never mind a woman half his size.  What does he have to prove by beating his girlfriend that he couldn’t evoke in a far more peaceful or diplomatic fashion?  The Dallas Cowboys gave him a chance to play last season based on his talent.  Understandably they took a fair amount of heat when other teams wouldn’t touch the guy.  It turned out to be the wrong decision.  They have yet to re-sign him for 2016.  I say fair punishment for his crimes would be putting him in the octagon with Ronda Rousey.

With all that being said, a perhaps more difficult question is when we forgive… or do we?  What happens when an athletes realizes the wrongs they’ve done and show genuine contrition?  When do we find it in our hearts to forgive?  Greg Hardy is a bad example.  So is Aroldis Chapman.  These two are scumbags of the highest order.  For example, Chapman has apologized for using a gun during the incident but not for attacking his girlfriend.  Chapman has not appealed baseball’s decision to suspend him.  That’s not contrition.  That’s idiocy worthy of another suspension in and of itself.

Chapman, class act, will lose two million out of his twelve million dollar salary for 2016, meaning he’ll still get paid ten million on the season.  As one faithful SportsChump reader sarcastically quipped “That’ll teach him.” 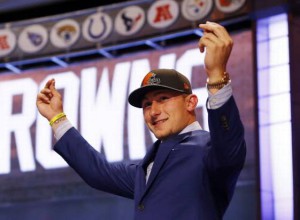 Think Manziel’s contrite?  He was just spotted in a Miami strip club “making it rain” while he’s currently under investigation by the Texas police.  Personally, I’d like to buy the rookie card of the first inmate who prison rapes Johnny Football.  That’d be your season’s MVP.

Perhaps there is some light at the end of this tunnel.  When we last saw Ray Rice, he was coaching football to a bunch of draft-eligible players.  Now, you may ask yourself, who the hell thought Ray Rice teaching a bunch of college kids was a good idea?  Maybe the person who saw fit to give Rice a second chance did the right thing.   Maybe he finally realizes the consequences of his actions and can turn them into a positive, serving as a role model on how not to treat members of the opposite sex.  Maybe he’s making the most of that opportunity.  I’m not saying he is.  I’m saying if a guy like Rice can serve as an example, expressing how he made a horrible mistake that cost him his career (but ironically not his relationship – he’s now married to the woman he knocked unconscious) then maybe he can serve a purpose after all.

I don’t mean to single out athletes here.  Domestic violence occurs in all walks of life.  Far too often it goes unreported and unpunished.  But this is primarily a sports blog and when athletes do the vilest things, we tend to discuss them, hopefully in a constructive manner.

It’s probably naïve to think that in this day and age where the ridiculously overpaid athlete thinks he can get away with murder (and sometimes does #OJ) that beating one’s wife, girlfriend or partner will eventually stop happening… that the day will come when we all just “get along.”

I commend professional sports leagues for their increasing lack of tolerance but there is still a long way to go.  Penalties can be harsher.  I would also make public service hours mandatory before any return to the field can be honored.

Despite one’s talent, playing professional sports should be a privilege, not a right.  The sooner owners, players, leagues and fans take a stand demonstrating what sorts of behavior they will not tolerate the sooner we can get to living in a world where these types of incidents no longer occur.