So football is moving back to L.A. once again.  Ho hum!

In times like these when the earth shifts westward directly from under St. Louis’ feet, who better to discuss the NFL’s return to Los Angeles than my West Coast correspondent?  You know him as Bleed PRPL&GOLD and like most Los Angelenos, he’s heard of this thing they call the NFL.  He’s just not a big fan of it.

When I first introduced the idea of a “Pros and Cons of Football in L.A.” post to him a few months ago, I got exactly the response I expected.  When I asked him how he felt about football returning to the City of the Angels, Bleed simply replied “Meh.”  He’s a man of few words.

This, I fear, is how much of Los Angeles thinks.  In my mind, the only groups of people who care less about their NFL team are the fan bases who reside in St. Louis and San Diego.  You can throw Oakland in there for good measure but at least they dress the part.

L.A. saying yes again to an NFL team is like that girl at the bar who finally succumbs to a drunk guy’s unwarranted advances.  She has no interest in him but with enough pestering, she finally agrees to go out on a date just so that he’ll leave her alone.  With the Chargers potentially moving as well, L.A. has now agreed to a second date before knowing if she even enjoyed the first.

Tell me, Bleed, when is this girl going to wise up and say she’s not interested?  And for those who don’t live three hours behind the rest of the country, tell us.  When news broke that Los Angeles would officially get an NFL team, again, what was the response?  Was there rioting in the streets?  Were people happy or was everyone too busy in their tanning beds to notice? 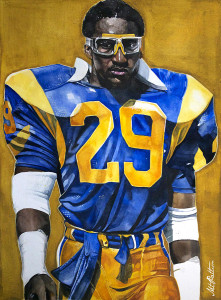 BLEED: There were a few Eric Dickerson jerseys removed from mothballed closets and paraded around the Southland the day of the announcement, but on a whole I’d say “Meh” summed it up quite nicely. The normalcy bias is strong here in La-La Land…Anything short of a 6.0 on the Richter scale doesn’t garner much reaction around here.

There are the hardcore Lakers, Dodgers, Kings and Trojans fans who live and die with their teams, but most people in LA approach sports as just another entertainment option. It was mentioned around water coolers the next day, but met with a yawn for the most part.

CHUMP: See, man?  That’s what I don’t get.  It takes an act of Congress for another city to land a pro sports team and L.A., the city of disinterest, lands one, perhaps two, teams just like that?

This just seemed like the majority of fat cat NFL owners jockeying properties around their NFL Monopoly board and muscling their way back into the nation’s second largest market because they figured they could all turn a profit.  Will this be remembered as Goodell’s finest moment or just another screw-up?

If the city couldn’t give a fuck about the team, why would the Rams owner and the rest of the league think he could move there and make money long term?  You and I both know it’s only a matter of time before that stadium looks more vacant than a Rays’ game.

L.A.’s going to need more than some new-fangled state of the art, $2 billion stadium to draw fans.  Most people’s houses out there already cost that much.  And who the hell is paying for that thing? 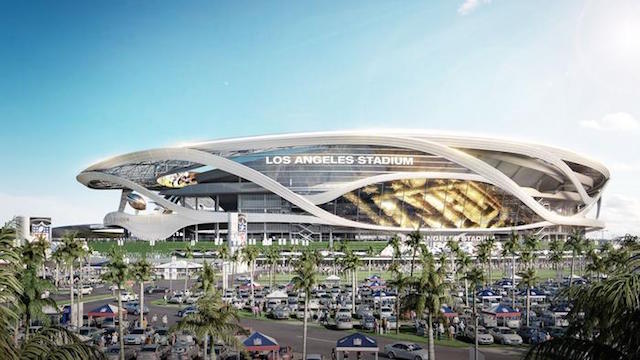 BLEED: Paying for it? Ha!

This is California, man. No one sweats the little things like how it’s paid for.

Unfunded liability is almost as dirty a word as illegal alien in the Golden State.

I think the land is already owned by the Rams owner, so now it’s more about building permits and ecological impact studies than actual dollars. How quickly we forget the mindset “You have to pass the bill to see what’s in it”. Well, the bill just passed again. So will the buck. I’m sure my local elected representatives will figure a way into my pocket yet again to help make it happen.

Even though I’ve never been a Rams fan, I’ll make the trek down the 405 to Manchester Boulevard to see Todd Gurley become a somebody at some point. I mean, it’s NFL football either which way. Chances are I’ll come up on tickets for free. It’s the Cali way.

CHUMP: So how does this all end?  Ten or fifteen years down the road when things go sour and fans lose interest, if it even takes that long, you have one more empty arena and another considerably less glitzy city that’s thirsty for an NFL team.  L.A. can’t possibly justify losing a team again, can they, especially since they built that George Jetson Stadium? 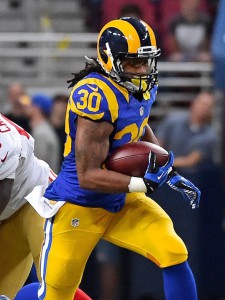 Or is it just the circle of life?

BLEED: Hard to say. The Rams won a title in St. Louis after leaving LA and the loyal fans here rooted for them during those Kurt Warner era squads. Having a potential star like Gurley certainly doesn’t hurt, but in the end winning is what will build the fan base more than anything else. Look no further than all the new Clippers “fans” for proof. Bradford is a decent QB, but he’s more fragile than Donald Trump’s ego.

…Then again, who knows? The Clippers survived mediocrity in LA all those years before finally becoming a legit contender. As did the LA Kings. I’m guessing America’s most popular sport can carve out a niche too.

The harder part will be getting the leftover Raiders fans to jump ship onto the Ramwagon. Good luck with that. They may not be very bright, but they are loyal.

CHUMP:  And there you have it, one man who speaks for an entire city, describing in a nutshell what to expect from the NFL’s most recent relocation.  I think he got his point across loud and clear: Jack Nicholson prefers air-conditioned venues and winning cures all ills.  Those 1980s “Showtime” Lakers sure set some lofty expectations.

I imagine the L.A. football team will be a draw, for a while, but this Rams team was bad.  Will Los Angeles support a team that should suck hind tit to both Seattle and Arizona for at least the next few seasons?  Will fans’ patience wear thin?  And when we see empty seats in that fancy new stadium, will we criticize the move or understand is as part of a larger business decision that lines the pockets of few?

The NFL knows how to make money.  We’ll see how soon and for how long that happens in the City of the Angels.

8 thoughts on “SportsChump Q&A: Football in the City of the Angels”