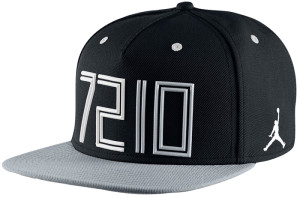 We could be on the verge of NBA history and I’m not talking about the Warriors breaking the Bulls regular season record of 72-10.  This will be history of another sort.

Since 1980-81, a select panel of sports writers and broadcasters has determined your NBA MVP.  We can argue about how much sense that makes.  Clearly these people watch a lot of basketball but they must have better things to do than watch each one of James Harden’s 3000 minutes played this season, not to mention those played by the several, other potentially MVP-worthy candidates.  We can only assume that those who the league entrusts to make such decisions are doing their due diligence.

No player in the history of the NBA has ever won the award unanimously, meaning no MVP has ever garnered every first place vote from every voter.  Not Michael Jordan, not Larry Bird, not Magic Johnson, not anyone. 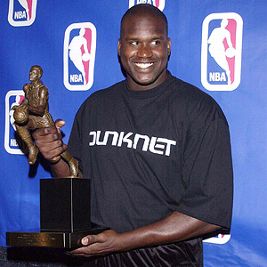 Despite those numbers, he didn’t pull home every first place vote.  Allen Iverson, who by most accounts had himself one hell of a season, just perhaps not an MVP-caliber season, received the stray first place vote.  Sports journalist Fred Hickman was the lone outlier, opting to be the only person to not cast a first place vote for Shaq.  He recalls getting death threats for his deference.  Who knew Lakers fans could be so inspired?

In 2012-13, LeBron James, like O’Neal before him, received all but one first place MVP vote.  Carmelo Anthony received the other, which sounds laughable at this point.  LeBron finished that season with 28 ppg, 8 rpg, 7 apg and shot over 56% from the floor.  His Miami Heat won the championship that year as well. 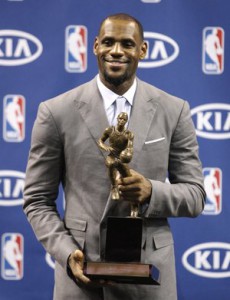 Carmelo’s Knicks actually made the playoffs that year (will miracles never cease) with ‘Melo leading the league in scoring (28.7 ppg) but he shot a Melo-like under 45% from the floor.  The Boston Globe’s Gary Washburn was the lone person (1 out of 122) to vote for Carmelo and did so based on his importance to his team.

In case you’ve been living under a rock this season, Steph Curry of the Golden State Warriors has been redefining hot.  Sofia Vergara hasn’t been this hot (okay, that’s a lie).  Hansel wasn’t this hot.  The damn equator of the sun isn’t this hot.  (Does the sun even have an equator?  I don’t know.  I got a C in astronomy).

By all legitimate accounts, Steph Curry is the best player in the league.  He’s putting in shots from anywhere on the court with dazzling regularity.  He’s become the face of the league.  He’s the league’s best player on the league’s best team.  No panelist in their right mind could conceivably think, by any contorted or personalized definition of the award, that any player has been more valuable than Curry has been to these 2015-16 Golden State Warriors.

We should also consider that Curry is considerably more likeable than the previous two, who pulled all but one vote.  O’Neal had just abandoned Orlando for Los Angeles a few earlier and LeBron had just made his rather unpopular decision.  While these two were highly marketable superstars, America wasn’t as much in love with those two as they currently are with Curry. 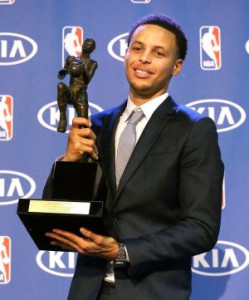 Could these Warriors made the playoffs without Curry?  Sure.  But this team is and has been on the verge of history all season.  They are now one inevitable win away.  So which ridiculous sports writer, who must know he’ll be the only person NOT voting for Steph Curry, is going to make a name for himself?  Who will be the odd man out and who could they conceivably vote for?

James Harden was narrowly bested by Mr. Curry in the MVP voting last year and is having another impressive season despite how mediocre his Rockets are.  But he’s not having a better year.  His Rockets are on the verge of missing the playoffs.  Kevin Durant is third in the league in scoring, behind Curry and Harden.  But one could make the argument that teammate Russell Westbrook is having the better season.  Westbrook is leading the league in triple-doubles this year with 16, which also makes Oscar Robertson chuckle.

Damian Lilliard, LeBron James, Kawhi Leonard and Boston’s Isaiah Thomas could and should all garner MVP votes… but not first place MVP votes.  There is just no way and yet… it’s never happened before.

Need further proof other than just the eye test that Curry passes with flying colors?  In the even more ridiculous stat department, Curry leads the league in Player Efficiency (defined by the NBA as ((Points + Rebounds + Assists + Steals + Blocks) – ((Field Goals Att. – Field Goals Made) + (Free Throws Att. – Free Throws Made) + Turnovers)).  Curry also leads the lead in other inexplicable statistics as offensive win shares and value over replacement which I won’t get into because I’ll probably just hurt myself and I’d like to keep your attention for a bit longer.

The bottom line is this.

We’re going to have one writer, one journalist, one rebel try to explain to you why Steph Curry wasn’t the most valuable player this season.  And if they do so, they’ll be wrong.

Steph’s Warriors are on the verge of making history.  Steph should be too.