Kevin Durant might be about to become the bad guy which is odd because it’s a role he’s never really embraced.

Over the career of every NBA player, it’s bound to happen.  Even though you can’t please all of the people all of the time, so far Kevin Durant has done a pretty good job of doing just that.  Having played all nine of his years in Oklahoma City (except for his very first when he played in Seattle before the team relocated), Durant has been squeaky clean.

Generally playing second fiddle to LeBron James as the league’s top dog (that is until Steph Curry came around), Durant has been the more likeable of the two.  When both players were coming off their first contracts, we lambasted LeBron for his “decision” to go to Miami and praised Durant for simply Tweeting that he was staying in Oklahoma City.  Heck, when Durant won his MVP award, he praised his mom for being the real MVP during one tearjerker of a press conference.  The guy probably rescues babies from burning buildings in his spare time. 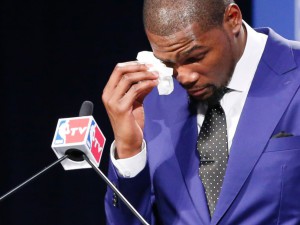 Well, Durant’s whole nice guy persona might be about to change.

This summer, Kevin Durant will become a free agent and there’s not a team in this league that isn’t salivating over the thought of having him in their uniform.  There are also quite a few that can afford him.  Even if they can’t, they’ll find a way to make room.

The post-Kobe Lakers would love to rebuild around him.  The almighty Golden State Warriors could probably trim some roster fat to afford him.  Even the dominant Spurs have said they’d be interested.  And obviously, Oklahoma City would love to keep him.

Like a kid who’s been really, really good for Christmas, Durant is about to be able to name his asking price.  With several other teams likely jockeying for position in the free agency sweepstakes, this should be a very interesting summer in the Durant household.

Of course nobody at this point, not even Durant, knows where he’ll be playing next season.  That’s where you come in.

Your job, should you choose to accept it, is to not only tell me where Kevin Durant will be playing next season but why.  Will he be a Laker?  Will he stay in Oklahoma City?  Will he join an already established powerhouse even further tilting the balance of power in the league?  Important: as your tiebreaker, tell me the length of contract in years you think he’ll sign for.

The person to most accurately tell me in the comments section below where Durantula will be playing next season, and for how long, will win themselves a fancy new SportsChump t-shirt to call their own and bragging rights that they know more than Durant’s agent.