Stephen Curry is bad for basketball?  I must be on the wrong website.

Clearly SportsChump has lost his mind.  Didn’t he spend his hard-earned money going to see Curry play in Orlando last season?  Weren’t these latest NBA Finals, which featured Curry, among the highest-rated in recent years?  Didn’t the guy just win two MVP awards?  Isn’t he the top selling jersey and one of the most marketable athletes in the league?  How in the world could Stephen Curry be bad for the game of basketball?!? 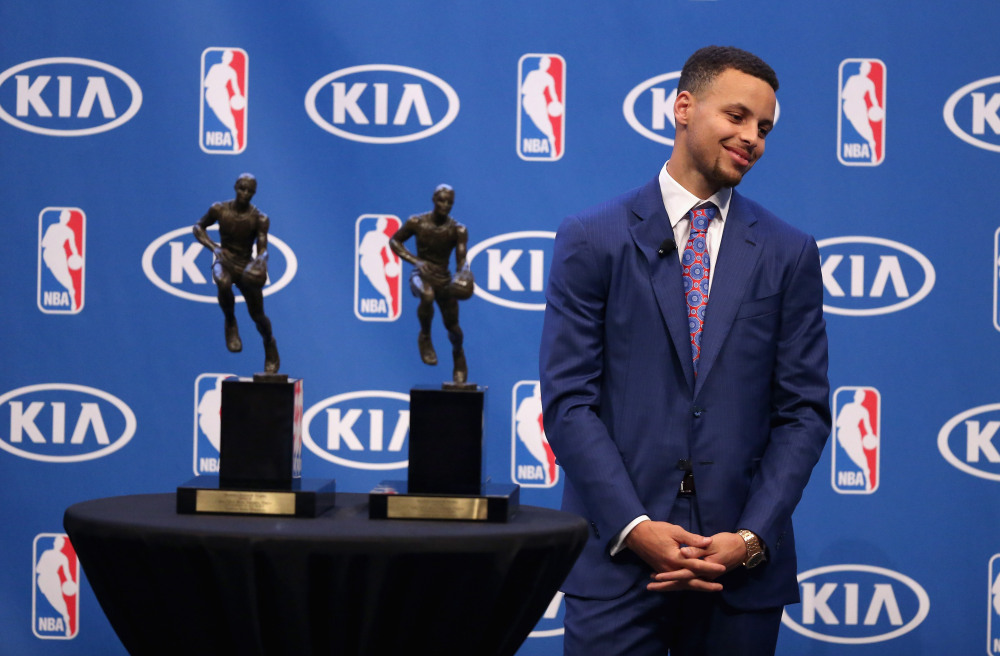 I obviously meant the title of this post to be tongue-in-cheek… sort of.  Hear me out on this one.

I try to hit the YMCA two to three times a week as my schedule allows.  Smack dab in the center of my YMCA, one of the nicer ones in the Tampa Bay area, sit two basketball courts, one right next to the other.  Depending on what time of the day I go, I’ll see kids of all ages shooting hoops and playing pick-up basketball.

Most of them are awkward young things, shooting the ball from their chest, barely able to dribble with their off hand and wearing their socks way too high as if to make some geeky sort of fashion statement.  Let’s just say the majority of them are in dire need of coaching… now so more than ever since Curry came around.

I’ll sit on the machines doing my thing watching these kids launch shots from basically anywhere on the court.  Like Curry.  And sure, while taking shots from half-court is always a fun and casual activity, let’s just say that since Curry made it fashionable, kids are shooting from far outside their comfort zone far more often than they should.

I’m not sure I recall a shooter like Curry hitting such a high percentage from twenty-two plus feet out.  One analyst once compared him to Chris Jackson aka Mahmoud Abdul-Rauf, which I found somewhat accurate except Abdul-Rauf never had anywhere near the sustained success or consistency of Steph Curry. 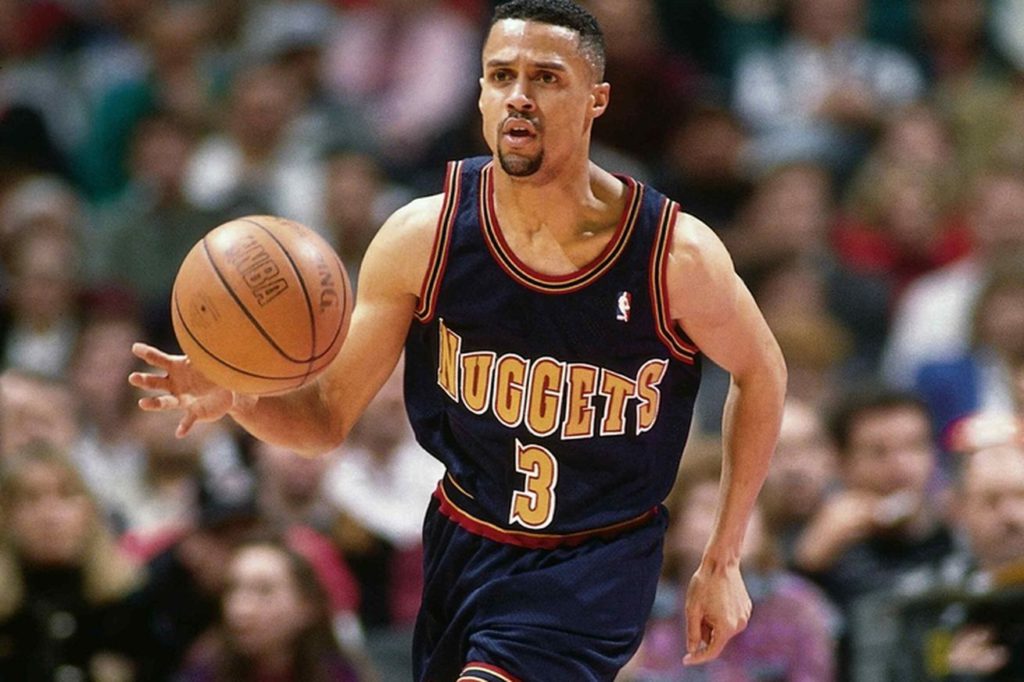 Without a doubt, Curry is a freak of nature.  He shot over 45% from three-point range this season.  Considering how many shots he took from behind the arc (886), that’s beyond remarkable.  It’s no wonder kids wanna be like Steph.

What kids at the YMCA and the local playgrounds DON’T see is how much work Curry puts into his game.  His success is no accident.  What they DO see, mainly because ESPN makes a point of showing it, is him launching basketballs from the locker room hallway before each game.  While Curry may be disciplined and putting up shots from Timbuktu is mildly amusing entertainment, the last time I checked those shots don’t count.  But Curry makes it cool so kids wanna do it. 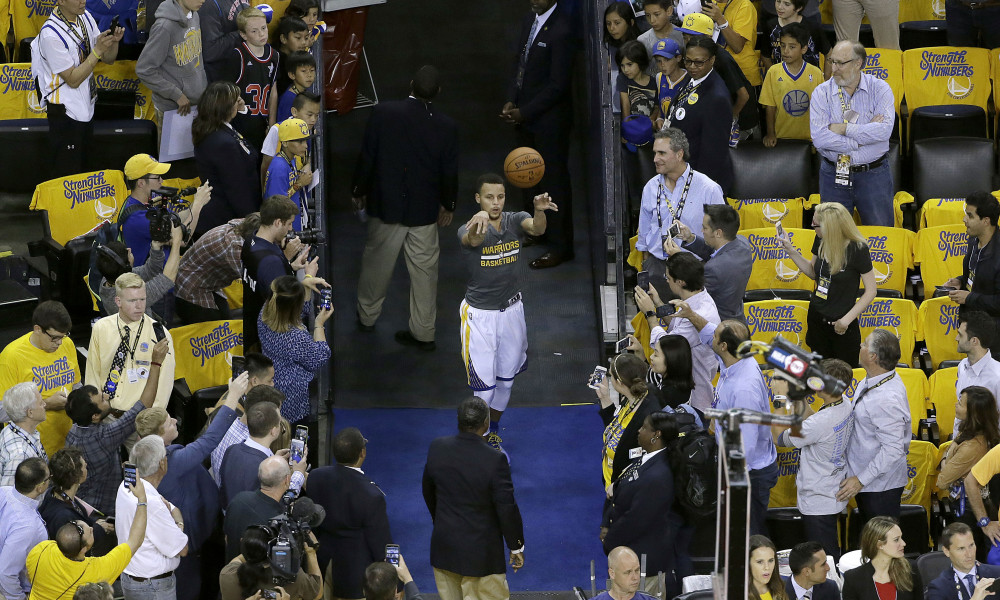 Curry’s not entirely to blame.  After all, he’s an entertainer as much as he’s an athlete.  ESPN’s not entirely to blame either.  What are they going to do, NOT show Curry’s circus-like, Globetrotter-esque talent?  Of course they are.  The kids aren’t entirely to blame.  They just want to emulate the biggest star out there.  But if we have kids doing nothing but taking shots from half-court as part of their training regimen, let’s just say the quality of basketball will suffer as the next generation of kids becomes NBA-eligible.

If I were a coach, which I used to be, and I saw my kids taking one too many half-court shots, I would make them convert 100 layups and tack on a wind sprint or two before they ever stepped on that half-court line again.

Steph Curry is an anomaly.  He’s a joy to watch, probably more so than he is to cover.  And in all seriousness, he probably brings a lot more kids out to the playground that would not ordinarily play.  He’s not a six-foot-eight behemoth like LeBron James.  Curry looks like the rest of us normal people.  Rest assured, however, Steph Curry is far from normal.  The sooner kids focus on how much work he puts into his game and not only where he’s shooting from, the better off they’ll be.  That should be what kids emulate: his work ethic, not his shot chart.

I watched a Jerry West video on YouTube the other day.  It was as remarkable as any Steph Curry game I witnessed this season, for Jerry West is also a freak of nature.

West, now 75 years young, is technically Curry’s boss.  Even though he’s the current GM of the Golden State Warriors, he’s probably more famous for assembling the Los Angeles Lakers championship teams of the 80s, being one of the Top 50 players in NBA history and of course for being “the logo.”

In this video you’re about to see, West teaches kids the proper arm technique and how to shoot a basketball.  In doing so, he doesn’t… miss… a shot.

This is a plea to the youth basketball coaches out there.  Let your kids have fun.  But for goodness sake, tell them the half-court shot has its time and place.  Mixing in some Jerry West pointers with some Steph Curry three-pointers is probably the best way to ensure your kids are taking the highest percentage shot.

7 thoughts on “Why Stephen Curry is bad for basketball”