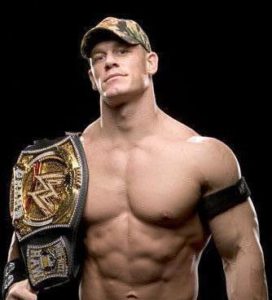 When most people hear “professional wrestling,” they imagine high-dollar pay-per-view crowds, Monday Night Raw, sold out arenas, and pyrotechnics to add the glitz and glamour to the show put on by the athletes. However, for every wrestler that makes it to WWE and Monday Night fame, there are dozens who are trying to work their way up the ladder. For women wrestlers, the two places they have to hone their craft are Shimmer and Shine, sister promotions to the independent Ring of Honor parent company.

Getting into professional wrestling can be a challenge for a number of reasons. For women’s wrestling, a lot of people might expect a heavily-staged and obviously faked slapfight leading into softcore porn, a la the “Tastes great, less filling” ad from Miller Lite. Of course, some wrestling has played with this idea, and there’s no shortage of sex appeal. What makes Shine more interesting is there is no holding back. Like any other wrestling, there is an emphasis on showmanship and choreography, but the hits, dives, and collisions are real. They really throw each other around, slam each other on the mat, and pull off holds that any wrestler wants to do. Given these are some new wrestlers, they are still getting a handle on the intricacies of the sport, but that adds to the charm of the show. Seeing Shine at the Orpheum feels a bit like getting to see that cool band before they’ve gone too slick, when the original members haven’t OD’d yet and they’re just starting to get their first great songs. Yeah, it might all fall apart, but getting in on the ground floor of something is a special feeling. Seeing them improve month to month is an exciting journey for both traditional fans and people who’ve been following wrestling for years. This month’s show had some great times for anyone watching. 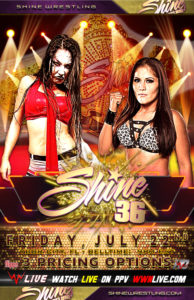 Shimmer and Shine have periodic shows available via iPPV, or pay-per-view, solely through the internet. Shimmer’s shows come from various parts of the country, but Shine is based out of Ybor City, Florida. Every few weeks, the Orpheum in Ybor City hosts the up-and-coming female wrestlers from across the globe. This past weekend, I ventured out to see Shine 36. A crowd braced the pouring rain to see a fantastic show from start to finish.

In the first match, two wrestlers named Devyn Nicole and Ariel Monroe were looking to get some experience in front of a crowd. They had a nice back and forth match that had a few hiccups but was overall a good match, lasting about four minutes.

The proper event began with the next match as a wrestler named Thunderkitty fought a woman nearly twice her size named Miss Rachel. Thunderkitty was a crowd favorite and really played the size angle of the match, with Miss Rachel at times tossing her around like a rag doll. Thunderkitty was able to choke out her opponent for the win after about ten minutes before grabbing the microphone to issue a challenge for the next pay-per-view.

The next match was a four-way match between Candy Cartwright, Stormie Lee, Kennadi Brink and “Luscious” Latasha. This match was a fun, fast-paced free-for-all before Latasha was dumped onto an unconscious Cartwright for the win. Latasha has a string of improbable victories and is currently undefeated heading into the next show.

Two wrestlers debuting in Shine were next with Raquel and Kelly Klein. Both wrestlers had experience in other promotions, and put on a match that was probably too short for their talent levels, but they put on a solid performance with Raquel getting a the win after a little over five minutes. 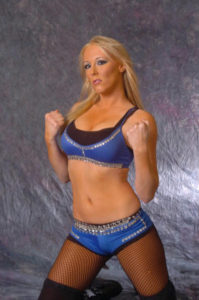 The first of three title matches was next as Amber Gallows, who has been the NWA Women’s Wrestling Champion since December, defender her title against Tracey Taylor. Gallows played the heel role very well, playing to the crowd as the villain before retaining her title.

Next was an absolute mountain of a woman named Vanessa Kraven against former NWA champion and Shine champion Santana Garrett. Kraven and Garrett are two of the better independent wrestlers around right now, and put on a great match. Kraven put on a great display as she choke-slammed Santana for the win at about seven minutes.

The tag team titles were on the line next as La Rosa Negra and Amanda Carolina Rodriguez fought against the champions “Better Than You,” who always play the villain role well. This match went on for quite a while as La Rosa Negra’s knee injury became the focal point of the match. Some interference by “Better Than You’s” managers Andrea and So Cal Val gave them the win to retain the titles, much to the chagrin of the crowd.

Allysin Kay and Xandra Bale was the next match, which may have stolen the show. These two women went for more than ten minutes exchanging offense, including Bale being stuffed into a trash can to flail like a turtle trying to get off its back. Kay ended up snagging the win, but the performance of both captured the crowd’s delight.

The Main Event was Shine Champion Ivelisse defending her title against Su Yung, who has a delightful gothic gimmick that will scare even the bravest of fans. She came to the ring in a blood stained bridal gown, terrifying even her managers, the aforementioned Andrea and So Cal Val. This match was a slugfest that included both women trading blows in the middle of the ring, tossing each other into the crowd, sending fans scurrying as their chairs were demolished, and even a dive off of the bar into the crowd. These two stopped just short of climbing onto the stage normally reserved for bands and going flying. Ivelisse retained her title in the end, causing Su Yung to fire her manager as only she can–by beating the crap out of her. Hostile work environment be damned.

This show was an absolute blast to attend. The next show on September 2nd will prove to be just as fun. And if you aren’t local to SportsChump Headquarters, watching on iPPV for ten dollars is worth the investment.

8 thoughts on “Doctor Milhouse gets into the ring with the ladies, figuratively speaking”