I know, I know.  That’s my natural state of affairs but seriously, I’m torn.  Perhaps you can help me out because I’m getting some really mixed signals.

Are we supposed to love, or hate, the NFL?

We’ve got its combatants regularly arrested for wrongdoing.  You name it and they’ve been booked for it.  If that overwhelming sense of entitlement wasn’t enough, all we hear about the league is how mistreats it players and how dangerous and even deadly a game it is.  We have reports, books, films not to mention cadavers that prove this is so.  We have a commissioner we love to hate, enforcing rules we don’t completely understand.  We pay outrageous prices for shitty tickets and lukewarm beer without giving it a second thought.  Owners dangle their team’s rights as ransom over a city’s population before ultimately deciding whether or not we’re worthy of its existence.  All of this seems unfair, self-serving and downright inhumane.

Yet we gather around every autumn to welcome it back from the spring and summer where we missed it like a long lost friend.  We count down the days until the regular season starts, giddy with excitement.

Fantasy drafts have replaced bachelor parties as rites of passage, with some (far too many) using them as an excuse to get liver-shockingly drunk.  (Seriously, there was a group of guys that came into my bar so piss-drunk after their draft party this weekend they could barely stand.  I couldn’t help but wonder if that would be grounds for divorce when they got home if only their wives weren’t attending draft parties themselves!)

As I’m writing this, I’m glued to a pre-season game between two teams I have no vested interested in, a game that has no meaning whatsoever yet I can’t find it within me to change the channel.  Like a warm security blanket, I take further relief that there’s another game coming on immediately afterwards. 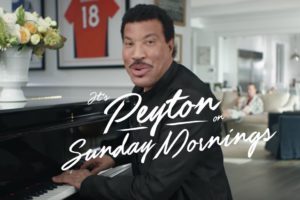 And I can’t help but tingle inside when I see the NFL’s masterful advertising about its upcoming season.  You mean to tell me you have a commercial with Lionel Richie playing piano as a bathrobe-wearing Peyton Manning shops for groceries, using coupons nonetheless?  Yes, please!  You’ve got the Pointer Sisters singing “I’m So Excited” to video of players shaking and shimmying down the field countered by Bill Belichick’s glorious grimace?  Sign me the hell up!

These ads fatten us up for the kill.  The NFL is master advertiser, master motivator and most certainly master manipulator.  And we can’t get enough.

We are defenseless to the league’s power.  And I haven’t even mentioned the gambling.

Every year, the league’s final game smashes previous viewing records with advertisers paying five million dollars for thirty seconds no one will listen to.

So in the end, do we love or do we hate the National Football League?

We fucking love it, that’s what we do.  Despite its flaws, it is an art form that is truly American, strong and ugly, violent yet beautiful, vindictive yet sportsmanlike, prehistoric yet cutting edge.

I suppose in the end, our love affair with the NFL is just like any other relationship.  Sometimes the game will do things that piss us off to no end and sometimes, well, sometimes, it knows just how to make up for it.

10 thoughts on “The NFL: It’s A Thin Line Between Love And Hate”