For several years, Steve and I have played trivia at pubs and bars around Tampa. Our rule of living within stumbling distance of our regular place means we get to play trivia and avoid DUI charges. You might have seen some places with controllers and TV screens, but ours uses a live reader and hand-written answers. The top three teams get gift cards, which is where many competitions stop. For the second year in a row (the second year this competition has been in place), we’ve been able to qualify for a national competition in Las Vegas by showing up and finding that sweet spot of 2.3 drinks (+/- 0.6 drinks margin of error) in which we know things.

From January to the end of June, teams from all over the nation go to their local bars and play (each game is free), gaining overall points for how well they place in addition to the gift certificates. Placing higher consistently gets you more points, making it more likely for you to get to Vegas. The questions cover a range of subjects, including pop culture, sports, history, and more. What can be a challenge from some people is you have to answer questions without using your phone or other reference materials, because if you’re cheating at free bar trivia, YOUR CHOICES ARE BAD AND YOU SHOULD FEEL BAD.

Most of the time, a “team” is whoever’s at your table (regionals and the finals limit a team to five people) but usually Steve and I are a team of two. Much like Simon and Garfunkel, Siegfried and Roy, or other great duos, we split our talents to cover a fair amount of ground. There are even times when we’ll each know one half of a question, jogging the other to complete the answer. For example, one of the questions in the final asked for an actress who Steve remembered was in The Walking Dead, but he couldn’t remember her name. Once he mentioned the role, I knew her actual name. 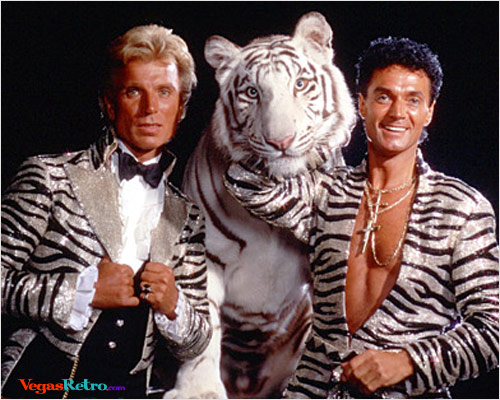 After the six months are up, teams get invited to regional finals. It’s the same format, but the game itself is longer and you’re limited to only five people per team. Occasionally, we’ll bring in ringers, but it’s really hard to find people who know stuff and aren’t incredibly punchable. One year, we finished second in the state, but I had to talk myself out of walking out/slapping someone/demanding a trade/taking my talents to South Beach. Intangibles matter, like grit, perseverance, and not being irredeemably irritating. This year, we didn’t finish as well, but the overall experience was much smoother and easier to handle.

After regionals, 200 teams across the country are invited to play in Las Vegas. For the second year in a row, the event was held at the Rio Hotel and Casino, just off the main Strip. Steve had better luck with the gambling and such than I did, but at least the pool and food was good enough for me. Since it’s the second year, there are still some bugs to work out. For example, the cocktail party the night before was….suboptimal. To paraphrase Henry Ford, you could drink anything you wanted, as long as it was Coors Light. We met an Elvis impersonator, who apparently has an aunt who teaches kids with autism here in Tampa. There was a single showgirl, which seems odd to me. One would expect at least two for symmetry and to make it seem less like she got lost on her way to an actual show. Steve and I made the best of it, mainly by leaving quickly and being the best dressed people there. We’re fancy like that. 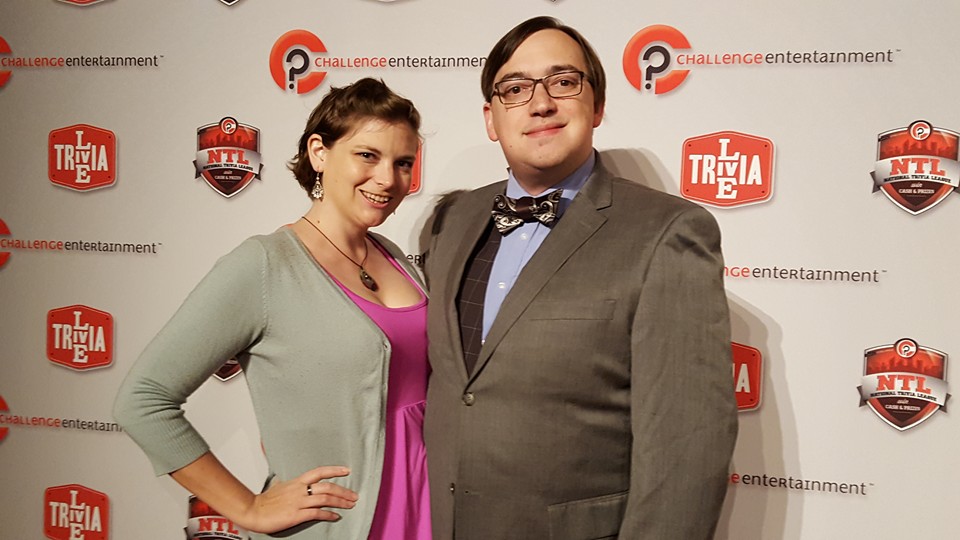 On the day of the competition, we joined 174 other teams in a large ballroom with tables, place cards, and branded swag for each team. With smuggled flasks and cash for mixers, we started what would be at least four hours of scratching our heads hoping we could remember all of the random garbage we’ve encountered in our nerdy lives. At stake was a $20,000 first place prize, with the top twenty teams winning some sort of cash prize.

The host was a guy who spent all of the previous year’s competition telling Texas-Oklahoma college football jokes, making pretty much every team boo, yell “GET ON WITH IT”, or something similar by the end. We started writing jokes on the back of our answer slips, with gems such as. “That’s a nice suit–does it come in adult sizes?”, “Your epidermis is showing”, and a drawing of Mormons deciding it just wasn’t worth it to evangelize to him. Same host this year, same procedure as last year. With the announcer trying to fire us up with dated wrestling references and more jokes about Texas being “God’s country”, we started insulting him immediately. Apparently, he’s kept all of our answer slips to show to other hosts, just to give them an idea of the kind of madness they might face. It’s in good fun, and I think kept us from getting bogged down and spry while thinking.

Finally, we got to the final question of the competition. Usually, this question has four items you have to put in an order. Most of the time, it’s four events you have to put into chronological order. This question also requires teams to wager points based on how confident they are in their answers. It’s the only time you can lose points; in earlier rounds, you can even get a question wrong without losing points. The four events are almost always close to each other in years, or even in the same year. At this point, we were already in the top twenty, meaning we were getting some cash. We were sort of confident, but not all that secure in our answer. After some consideration, we decided to wager zero. Just thirty-eight points separated first from twentieth so it was still anyone’s game. If any other team wanted our spot, they’d have to fight us.

After tallying the final round, there were ten teams at various ties. Tiebreaker questions ask teams to figure out a number closest to a certain value, such as how tall Big Bird is in inches (98) or this time, the population of Sioux Falls, South Dakota (just over 160,000 as of 2012.) To the surprise of everyone, the top two teams had the same guess, so they had to have a second round of tiebreaker questions. I don’t remember this question, but we finally got it sorted. We didn’t have to do either tiebreaker, which left us spending ten minutes twiddling our thumbs. Finally, the dust settled. I can’t imagine being the team member who was sure of that second tiebreaker, but still wrong. The drop from $20,000 to $7500 is steep, and I’m personally glad I didn’t face that responsibility.

Our 18th place ranking was safe, giving us $500 in cash and a satisfaction of being better than we were the previous year. With just us, Steve and I placed higher than full teams of teachers, professionals, NASA engineers, and even the team who won last year!

Next year, we’re going for a third round. We’d like a proper trophy we can drink out of. 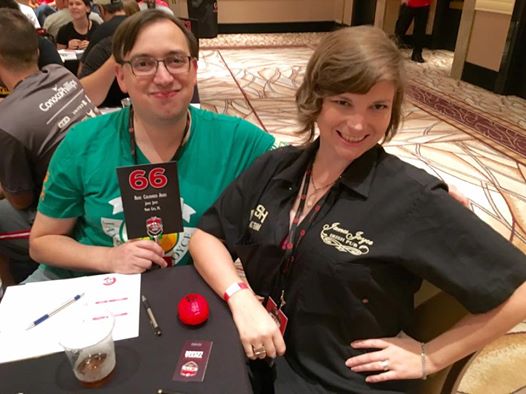 5 thoughts on “Dr. Milhouse’s Better Half and Their Not So Trivial Trip to Vegas”