If you’ve glanced at hockey at all, you’d know that the NHL season opened last night. You’d also know about Auston Matthews—drafted first overall this year—who scored 4 goals in his NHL debut. His first goal was off his first shot in an actual, for realisies, NHL game. Of course, the Leafs Twitter and web-o-sphere has lost their collective minds. Even Rolling Stone is covering this, and I’ve never seen them talk about hockey [EDIT: They do, just not much]. No player has ever scored 4 goals in a debut. For the record, the most goals one player has ever scored in one game is 7 in 1920. Only 44 players have even hit 5 goals in a single game. What I’m saying is Auston Matthews is in some rarified air right now. What follows is a comparison between the complete spectrum of reactions and predictions.

HALF-MEXICAN HOCKEY JESUS HAS COME TO DELIVER US FROM EVIL. Everything is beautiful and nothing hurts. Of course the Stanley Cup victory parade is planned—it’s always planned, just adjusted to accommodate construction. That parade route is everywhere. Every continent. Every city. The ownership group and the entire team will also win the Nobel Peace prize after the parade goes through places like Sudan and Syria, inspiring people to stop committing ethnic cleansing for upwards of 10 minutes. 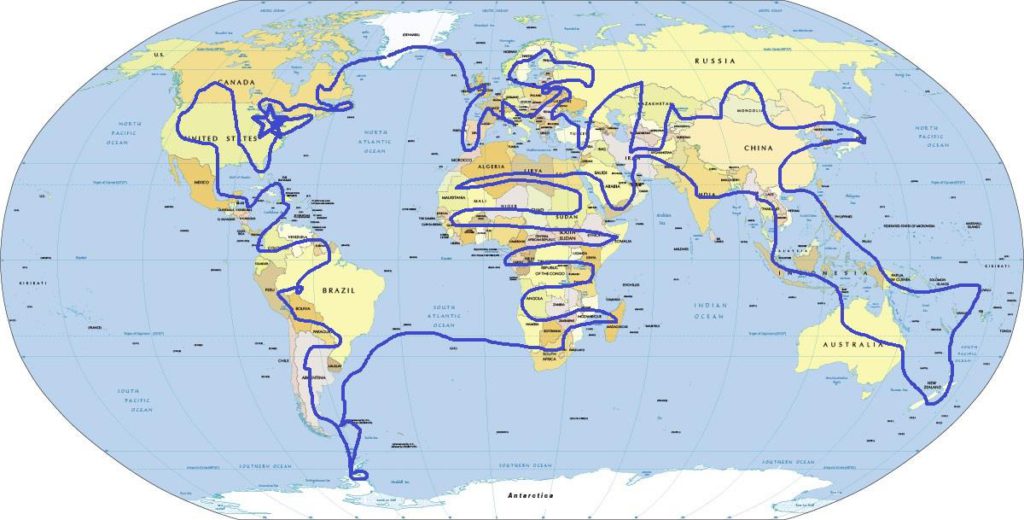 Artist’s rendition of the route. Map originally from Nations Online, plus some MS Paint fun.

The jokes are over, people! It’s all coming up Milhouse. The rest of you can pre-emptively suck it. Suck it long. Suck it hard.

Oh, jeez. There was enough hype on this kid before, but 4 goals in one game? It’s only downhill from here. You can’t top that. The Toronto media is already ridiculous, but now it’ll be downright suffocating. That’s impossible for anyone to deal with, but a 19-year-old rookie is especially vulnerable. It’s also worth noting that despite this amazing feat, the Leafs still lost the game in overtime. You have a rookie breaking records, and you still lost. That’s so Leafs, it hurts. He needs support, which he won’t get because the powers that be are a bunch of mouth-breathing dummies. You can only expect so much from a player accompanied by a full LTIR and a roster of “meh.” Once he cools off or gets hurt, he’s going to get ripped to shreds and chased out of town. Assuming his spirit and psyche aren’t completely shattered, he’ll end up getting traded to another team for the equivalent of magic beans and a limp high five. He’ll go on to fantastic success elsewhere, and everyone involved in the trade will be ridiculed. Plus ça change…

Scoring 4 goals in a single game is phenomenal. It’s no easy feat, and he needs some props for it. Keith “I’m going to ignore this historic thing to talk about how he wasn’t spazzing out or something” Jones can fall off a dock, though. Sure, it’s a great feat, but we need to be cautious. It’s really tempting to ride the hype train as far as possible, but that’s not going to end well for anyone involved. It’s my hope that the team lets him grow and adjust as needed rather than expecting immortality now. A five-year plan is more sustainable and realistic than a one-year plan. Get him support, and get ready for a really fun player to watch.