Remember at the beginning of this adventure when I A-Teamingly hinted that I liked when a plan comes together?  The objective of this trip was for four old friends to visit Memphis and travel to Fayetteville to see Florida take care of business against the Arkansas Razorbacks.

That shouldn’t have been all that difficult.  After all, the Gators, winners of nine straight in the series, hadn’t lost to Arkansas since 1982 and the Razorbacks had just lost to Auburn 56-3.  The Gators would most assuredly leave with a win and get one giant step closer to an SEC Eastern Conference title.

The best laid plans of mice and men.

Saturday morning came way too early.  Beale Street and bourbon still coursed through our veins from the night before.  With my voice already hoarse from laughing uncontrollably since I first set foot in Memphis, I’d hardly be loud enough to cheer for my Gators.  As it turns out, it wouldn’t matter one bit.

The good thing about hanging with friends you’ve known for twenty-five years is that the laughter can come from anytime and anywhere in the most unexpected moments.  With Brotha E, Liar North and the Don Calvino, let me tell you that the laughter is relentless.

I was having such a good time that my rib cage hurt.  Who needs sit-ups and ab crunches when hanging out with friends like these?

So off we drove to Fayetteville, some 325 miles away.  The Arkansas countryside was nothing spectacular as we traversed Interstate 40 until we got closer to Fayetteville, which is located in the northwest corner of the state.

We pulled into town with less than an hour to spare.  After a brief parking mishap and an exchange of information, we hoofed it to Donald W. Reynolds Razorback Stadium about a mile away, which gave us ample opportunity to see a surprisingly beautiful campus and rather impressive tailgate. 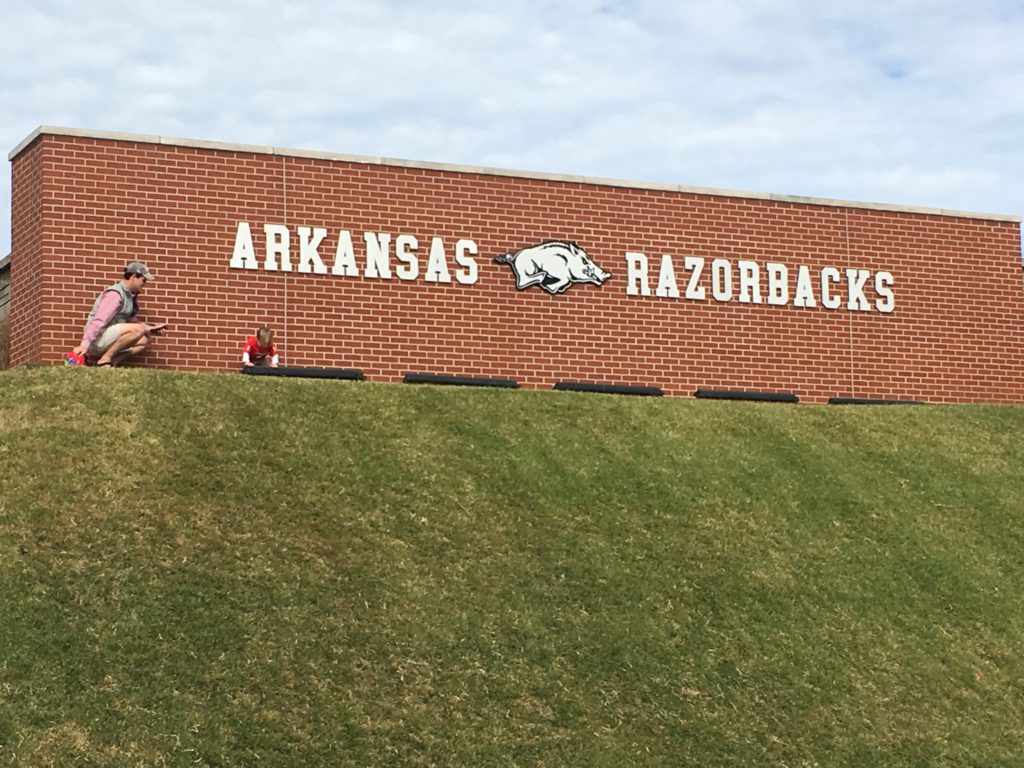 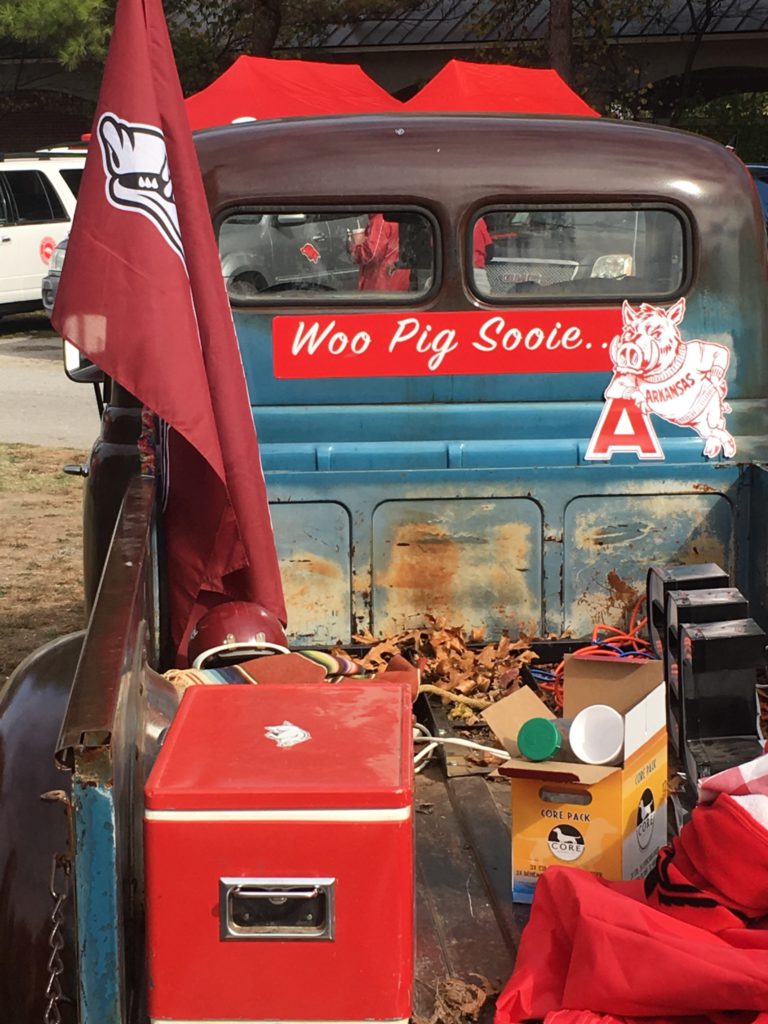 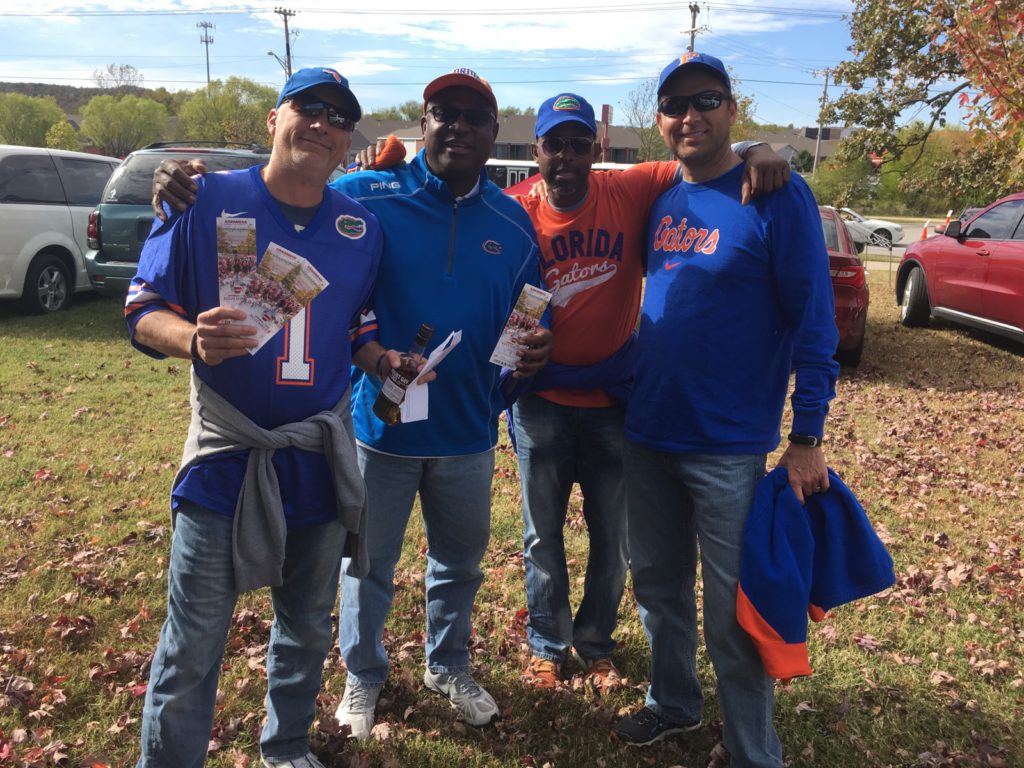 We entered the stadium right at kick-off (perfect timing) to find over 70,000 Razorback fans chanting “Woo Pig Sooie” with all the Gator fans that made the trip tucked away neatly in a corner of the end zone.  That’s not anything unique to Arkansas as college home teams generally centralize visiting fans in one remote corner of the stadium, leaving it up to them to be as loud as humanly possible to support their team.  Unfortunately for Gator fans, the orange and blue that afternoon gave them very little to cheer about.

Only minutes into the game, Brotha E astutely pointed out that the Gators had come out flat.  It didn’t help matters that Luke Del Rio threw a pass that was intercepted and ran back for a touchdown on their very first offensive play of the game.  It would be a long afternoon. 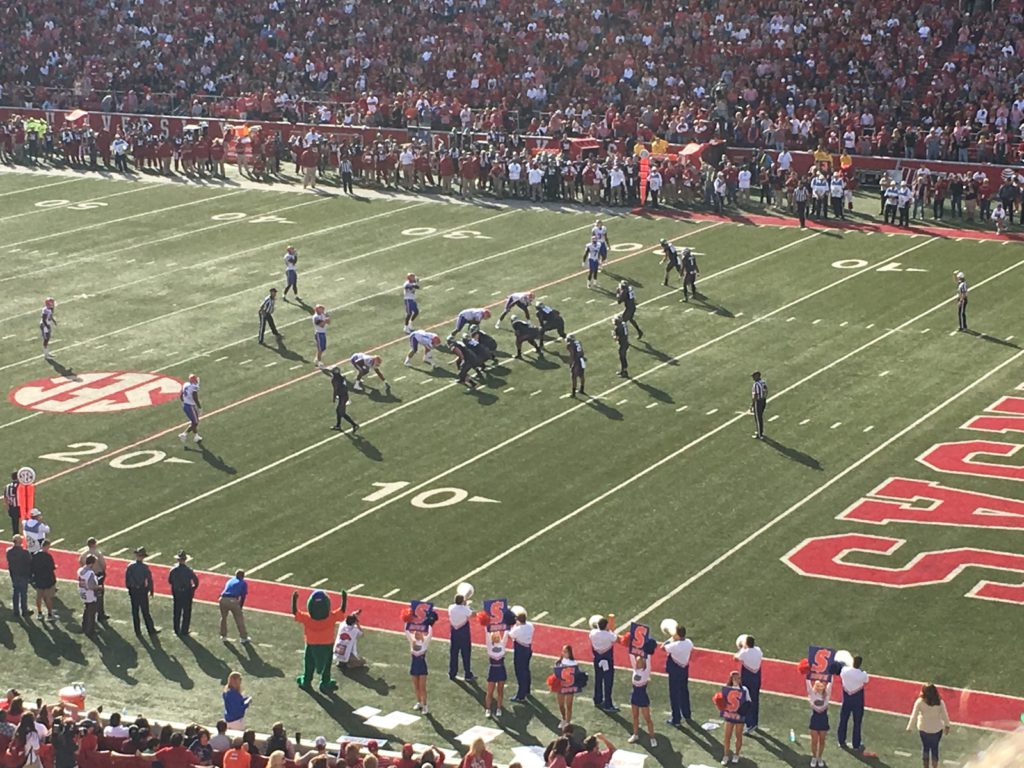 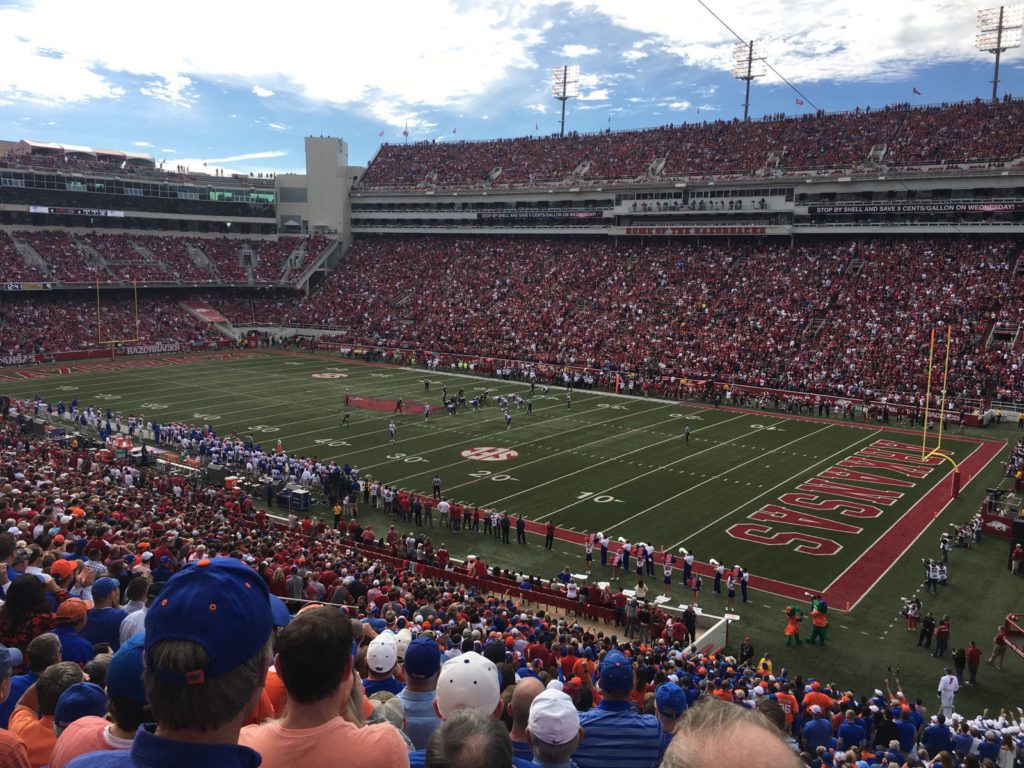 The Gators were manhandled, beaten thoroughly in every aspect of the game: line of scrimmage, turnovers, first downs, third down conversions, rushing yardage, passing yardage and time of possession.  It was, my friends, an ass-whoopin’ of historic proportions; the echoes of “Woo Pig Sooie” got louder as the game progressed.

Had it not been for the company and the environment, this game would have been less than entertaining.

The Razorbacks beat the Gators so soundly that Florida head coach Jim McElwain Tweeted out an apology to all the fans that traveled to see that performance.  We begrudgingly accepted. 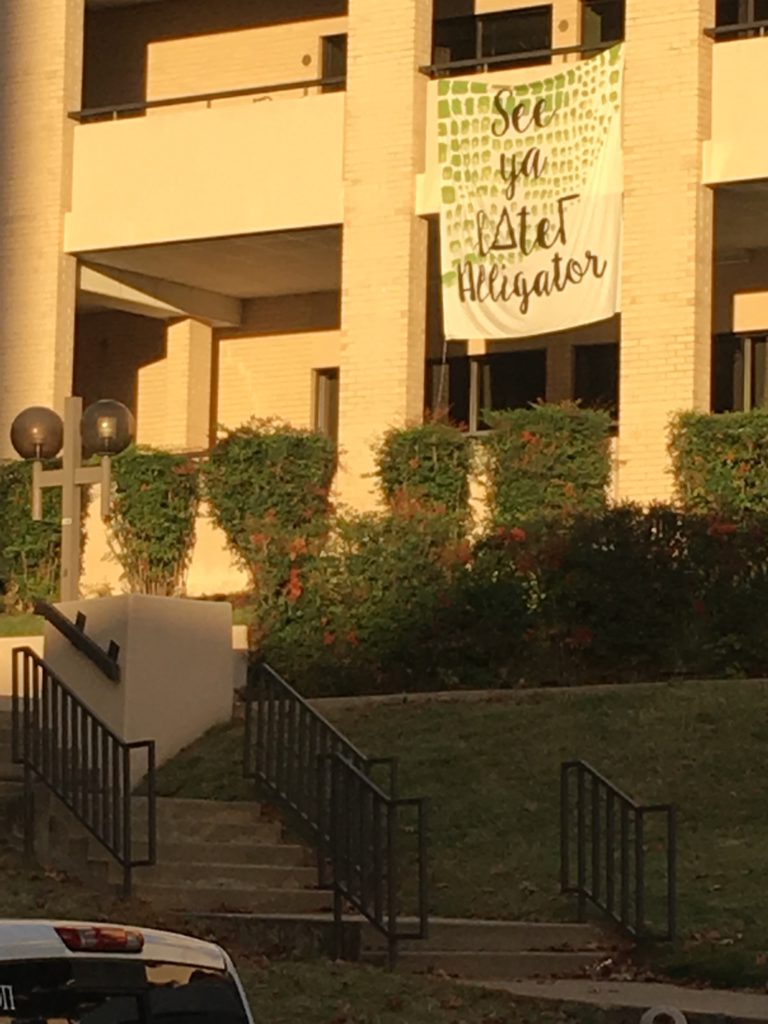 You’ll be glad to know, however, that the 31-10 outcome of the game in no way spoiled our fun because of one huge reason: the incredibly, hospitable people of Arkansas.

I’ve traveled to a fair amount of towns to see football games and I can honestly say that the Arkansas fan base was the most cordial I’ve encountered yet.  Perhaps it was because they had just whooped us for the first time in thirty-five years but I doubt that.  These people were genuinely sincere.

We ran into countless Razorback fans all night long that went out of their way to make sure we were having a good time, like an entire population of B&B hosts eager for a good Yelp review.  It was uncanny.  We had people engaging us in conversation, buying us drinks, asking to take pictures with us.  Heck, one group of Arkansas fans even bought us a plate of appetizers.

Dickson Street is Fayetteville’s party strip and that night it was jumpin’.  After all, Razorbacks were partying like it was 1982, which ironically was the year Prince released smash hit 1999.  Looking for any sort of party, the four of us hit Doe’s for what one Arkansan recommended was the best steak in the South.  He wasn’t far off. 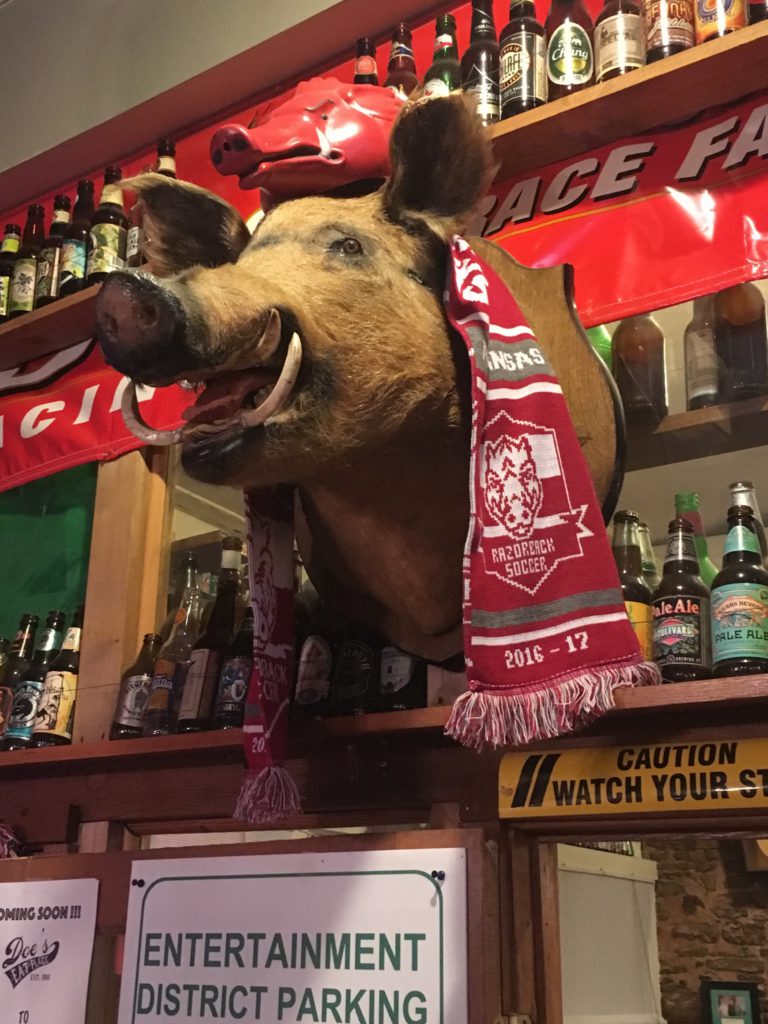 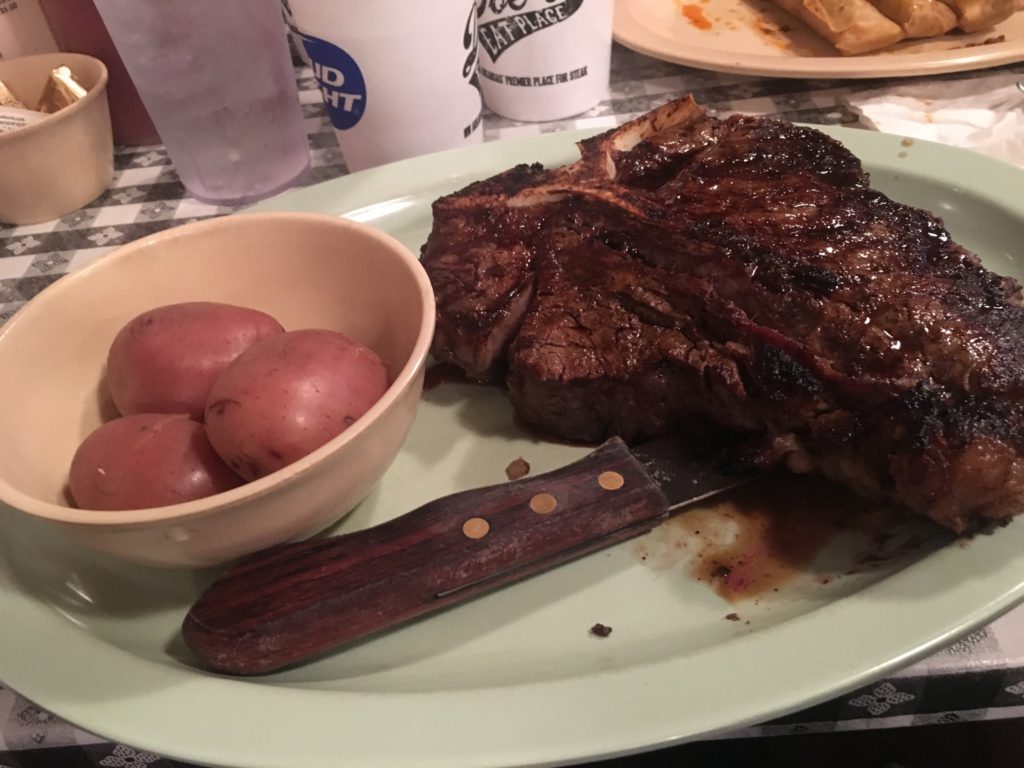 The entire night was as memorable as they come.  Final score excluded, this trip which started out with so many question marks ended up with an exclamation point. 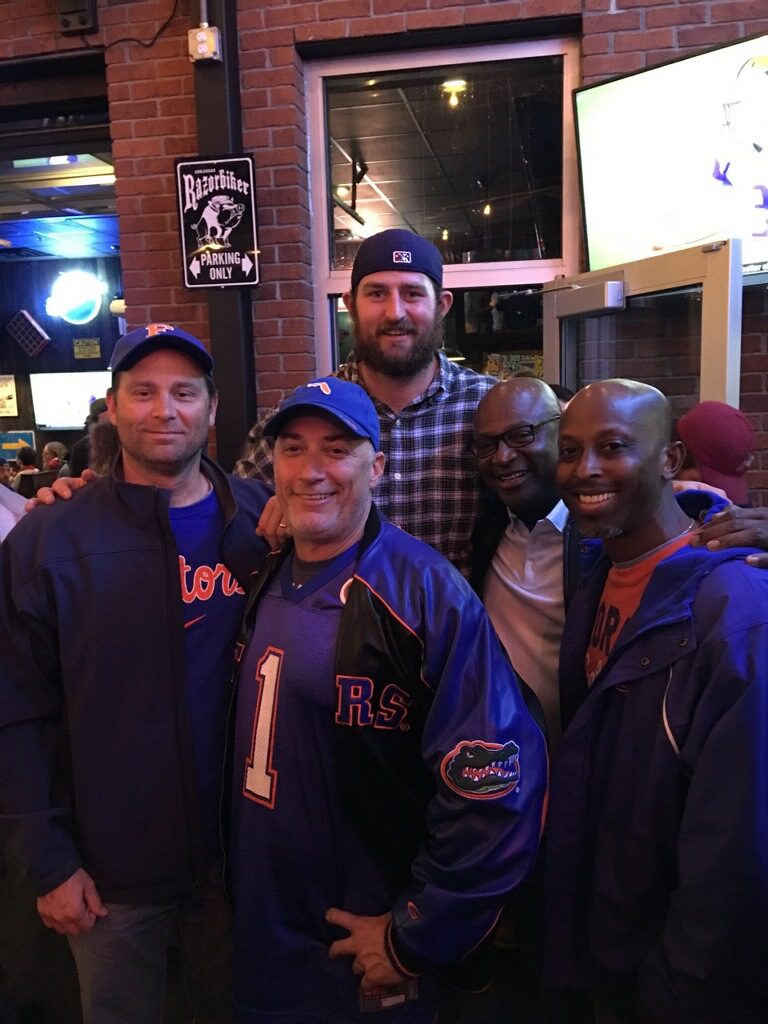 I’d like to thank the good people of Arkansas for being so gracious, Brotha E for being the host with the most, Liar North and the Don Calvino for being the consummate travel companions and work for granting me the weekend off to chalk up two more towns, and so many more experiences, off my bucket list.

Gentlemen, until we meet again.

8 thoughts on “What Did Tennessee? What Arkansas: The Conclusion of a Vacation Well Spent”