Our nation has reached a moment of crisis.  We have LeBron James and Phil Jackson arguing about the proper use of the word “posse,” dogs and cats are on the verge of living together and President Obama just concluded a press conference outlining the smooth transition from one commander-in-chief to another.

Don’t get me wrong.  White guys spewing character keys at one another is not culturally exclusive to an impending Trump presidency.  No, a Trump presidency will far more resemble the Wild Wild West where people literally kick the shit out of each other in lieu of doing so figuratively online.  Actual bullying will replace the far more politically correct (yet equally bullshit) cyber bullying, so prepare for a different and far more physical version of the real thing.

Watching white guys kick the shit out of each other is still popular.  It’s why MMA and hockey draw ratings and probably why Donald Trump got elected.  But that’s not what this was.  This Twitter takeover was a classic, 21st century version of two on-air personalities taking jabs at one another from miles apart and us enjoying the hell out of it.

Bill Simmons is a former blogger turned ESPN analyst turned HBO talk show host turned guy currently unemployed.  His HBO show has recently been cancelled leaving him only to focus on his newest website venture The Ringer.  Cris Collinsworth is a former Florida Gator turned Cincinnati Bengal turned NFL analyst.  He has been employed by NBC since 1990 and has done a fairly good job for them over the years.  Both of these men are white.  Collinwsorth is 57 years old.  Simmons is 47.  Let’s just say this fight would be the undercard of pretty much every other fight out there if its possibilities didn’t pique so much interest.

I mean, you’d pay to see that, right? 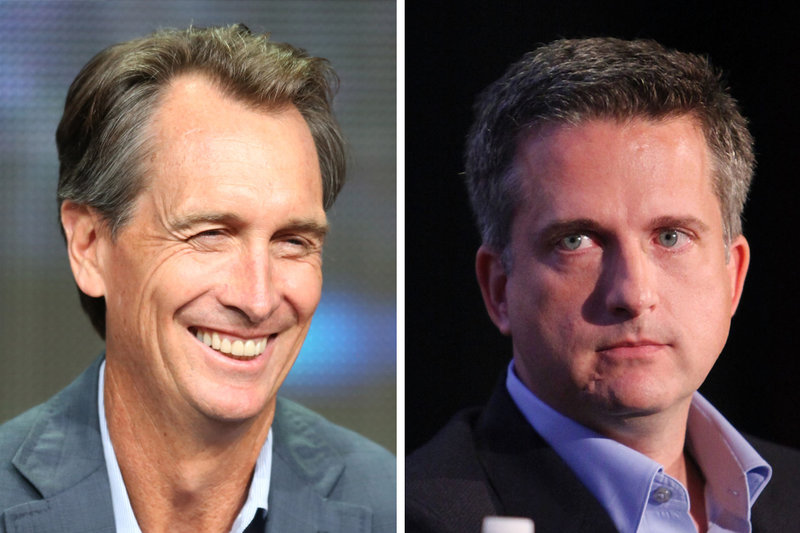 Simmons, formerly a good writer, has been known to express his opinion about pretty much whatever he feels.  It’s why ESPN plucked him out of Boston and gave him a job in the first place.  Collinsworth, depending on where you stand, is one of the better play-by-play guys in the NFL.

Sunday night, during the Seattle Seahawks-New England Patriots game that the Seahawks eventually won, Bill Simmons Tweeted “Somebody needs to gently break the news to Collinsworth that the Pats have a weak front 7 and that’s why Seattle’s o-line looks good.”  I guess Simmons, an unabashed Patriots fan, didn’t care for the way Collinsworth was calling the game, hence the advisory Tweet.  And while his Tweet may have been factually correct, he still took a direct jab at Collinsworth’s according-to-Simmons, neglectful reporting of the situation at hand.

Apparently Collinsworth got wind of the Tweet, didn’t like that Simmons was criticizing his coverage of the game and replied with “Thanks, Bill.  We’ll look for you “gently” breaking it down on that hit show of yours.”

It’s times like these that Twitter was made for.  Trump will be in the White House in another two months, boys.  You might want to kick it up a notch.  Sincerely, Clint.

I’m not taking sides in this argument.  I happen to like both Collinsworth and Simmons, and Clint Eastwood for that matter.  But this whole internet bickering is one of the reasons we just shook up our political system.  The fact that two skinny white guys are making news by picking a fight with each other, and that it was Twitter’s most talked about item, is pretty darn ridiculous considering there’s so much other stuff we need to be worried about, like the aforementioned dogs and cats living together.

I’m not suggesting we all don’t see a silly movie every now and again or even poke fun at two white guys as they try to get the best of one another but it’s always best to keep things in their proper perspective.

To provide you all with some closure, you’ll be happy to know that this heated war of words has been put to bed.  Collinsworth appeared on Simmons’ podcast and the two have kissed and made up.  I guess that means we can finally go back to talking about things far less important.

5 thoughts on “The Trump Chronicles, Part One: White Guy Twitter Battles Are Only The Beginning”