This season, all any basketball fan could talk about was the bad blood between Kevin Durant and Russell Westbrook.  It was the most bitter breakup professional sports had seen in years.

It wasn’t long ago that these two appeared destined for greatness.  They both still are, just not as teammates.  That was until Sunday night at the 66th Annual NBA All-Star Game. 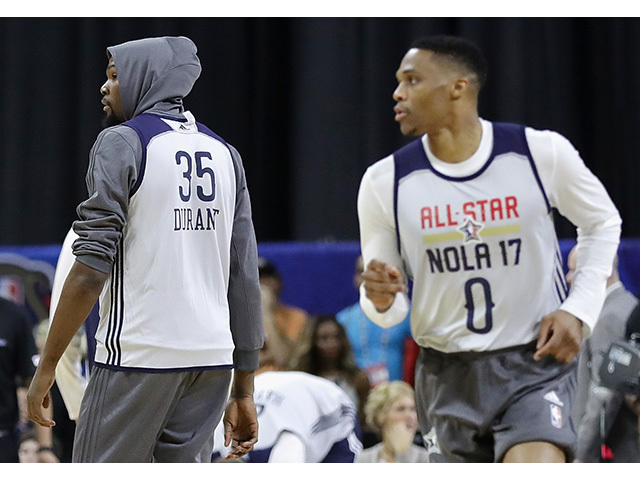 Back in 2012, Westbrook and Durant, alongside James Harden, took the Oklahoma City Thunder to the NBA Finals.  They ultimately lost to LeBron James and the Miami Heat but it looked like the team from the dusty Midwest was on to great things.

Then Harden left.  Last year, Durant followed him out the door, leaving Westbrook all by himself in a cupboard-bare Oklahoma City.

In a fairy tale of another sort, Durant was supposed to be OKC’s savior.  Originally drafted by the Seattle Supersonics, who eventually became the Oklahoma City Thunder, Durant was going to be the one to take the team and the town to the proverbial promised land.  He would be their best, and certainly most beloved, player ever.  A point guard of reckless abandon, Russell Westbrook would be the driving force behind it all.  Destiny would have them as one of the sport’s greatest duos of all-time.

Last off-season Durant decided to take his talents to Golden State.  Harden leaving Oklahoma City made headlines but not quite like the rift that Durant leaving created.  Old school ballers criticized Durant for taking the easy way out and joining a ready-made championship team in Golden State.  The Warriors had already won a title.  Even though they lost last year’s Finals to Cleveland, Golden State still had the capabilities to win another even without Durant.  Going to Oakland was Durant’s soft option. 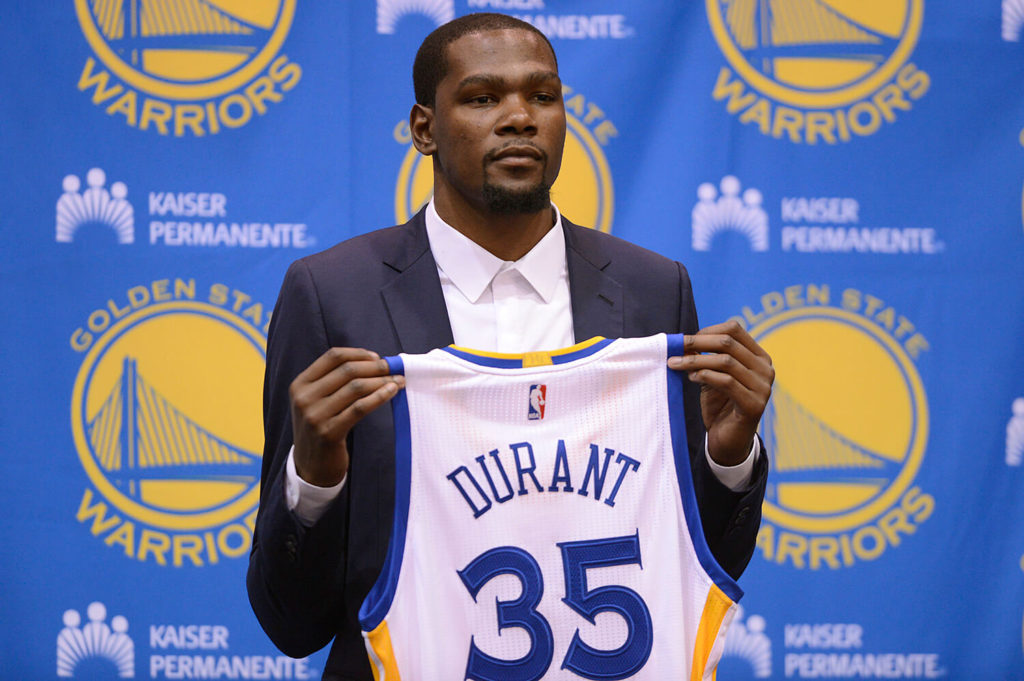 Worse than that was the gap it created between him and Westbrook, two players we once believed to be the best of friends and who now no longer spoke.

All the media could talk about from the season’s start was the feud between the two, how Durant crushed the hopes and dreams of a city and how, by leaving, he took away Westbrook’s only shot at a title.  It matters not that this team might not have won had he stayed.  We only deal in hypotheticals and betrayal.

When Durant returned to Oklahoma City for the first time since joining Golden State, the boo birds rained down from the rafters.  He and Westbrook barely spoke.  That was until the end of the game when we saw some healthy jawing between the two.

This All-Star weekend, the two would be reunited on the same team for the first time since the split.  How many minutes would they play together was all anyone could ask.  Would they pass to one another?  Would they speak, argue, embrace, high-five?  The complicated dynamic between the soft-spoken Durant and the explosive Westbrook made for great gossip, the equivalent of the Academy Awards asking Brad Pitt and Angelina Jolie to present an Oscar together.  Fireworks were inevitable. 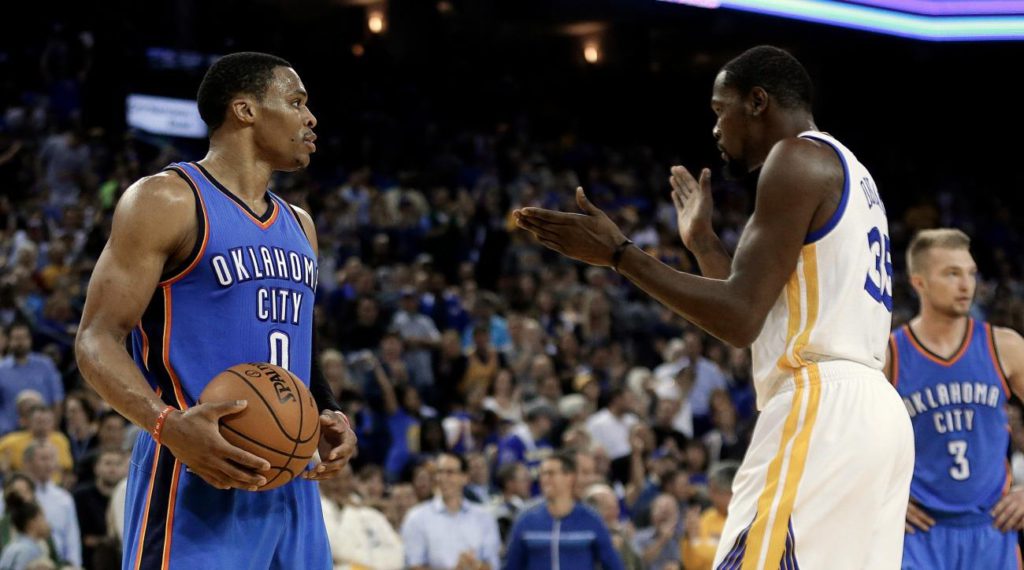 Personally I thought the media made far too much of the whole ordeal. I haven’t written about it before because a) everyone else already has, leaving nothing more to be said and b) relationships come and go.  People break up and move on.  Some decisions are neither right nor wrong; they are just made and that’s that.   Nobody plays together forever, so what was the big deal and why did every question have to do with their falling out?  I even felt sorry for the two former teammates.  If I got asked the same question about an ex a thousand times over, I’d grow tired of it too.  They’re no longer teammates, they’re no longer friends.  It happens.  Kevin Garnett still hasn’t forgiven Ray Allen for joining Miami to win a title and that was five years ago.

And then it happened, the moment we’d all been waiting for, the exact opposite of how we expected.  Minutes into the All-Star Game, we were witness to a dazzling, alley-oop pass from Durant to a driving Russell Westbrook.  In a game that featured 103 assists and 75 dunks, the Durant to Westbrook slam was the highlight of the night.

Minutes later, TNT sideline reporter David Aldridge grilled both all-stars, trying to get one of them to say something about the dunk and the bitter break-up that preceded it.  Was there resolution or still resentment as if a single pass could change anything.  They both took the high road, not feeding into the hype.  They wanted the talk to be over just as much as we did.

There was not much else to the story, just two former teammates going their separate ways.  They weren’t the first to do so; they won’t be the last.  Players have left the teams that drafted them before.  Dynamic duos have failed to live up to expectations.  I’ve heard not a single pundit propose that maybe Durant and Westbrook actually didn’t.  Maybe for them, that was as good as it got.

For those of us begging for an end to this story, closure has finally arrived.  During the time out right after the alley-oop, Westbrook and Durant’s Western Conference All-Star teammates showered them with praise, jumping up and down on the sidelines like the young men they are, apparently as happy as the rest of us that we could finally put this story to bed.

Rest assured that the bad blood still exists.  Fortunately, the conversation about it no longer has to.