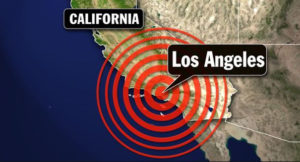 Whenever there’s a tectonic shift out West, and this week we saw some seismic activity for sure, I like to turn to my West Coast correspondent, Bleed PRPL&GOLD.  Not only is he one of the most dedicated and knowledgeable Lakers fans out there, the fucker can write.  In my nine plus years collaborating with him dating back to our Fox days, Bleed has rarely been one to hold back how he feels.

When news of a complete, Lakers front office overhaul hit my waiver wire, I felt compelled to pick the man’s brain.

In case you haven’t been paying attention, heiress to the Los Angeles Lakers fortune Jeanie Buss, demoted her brother, fired her General Manager of sixteen years along with other key personnel that had been with the team for ages.  Apparently the status quo just had to go.  In their place, Buss anointed eternal Laker Magic Johnson to help her call the shots.

Within days of the decision, shots have been called… and fired.  Heads have rolled, trades have already been made and a new GM, Kobe’s former agent, has been appointed.

Let’s get this party started, Bleed.  What’s been the reaction to all the goings on?  I mean, we all saw this coming, didn’t we?  Changes had to be made.  Were people shocked that it happened so abruptly?

Bleed: I know I was. Mainly because it happened mid-season. Despite the Lakers penchant for the dramatic, I would think a shakeup of this magnitude would be better served in the off season. I agree with you that the handwriting was on the wall for Jim’s exit to be sure, but the timing of it makes this look a tad desperate. Mitch getting the axe was even more surprising to me. From the local sports talk chatter the speculation is that their failing to get DeMarcus Cousins and seeing him go to New Orleans for such a paltry return got Jeanie’s panties in a wad. Rumor has it, she really wanted him, thinking being a Laker would make him turn over a new leaf as far as his attitude and emotional outbursts. Me? I’m not so sure. That cat’s a little wild. 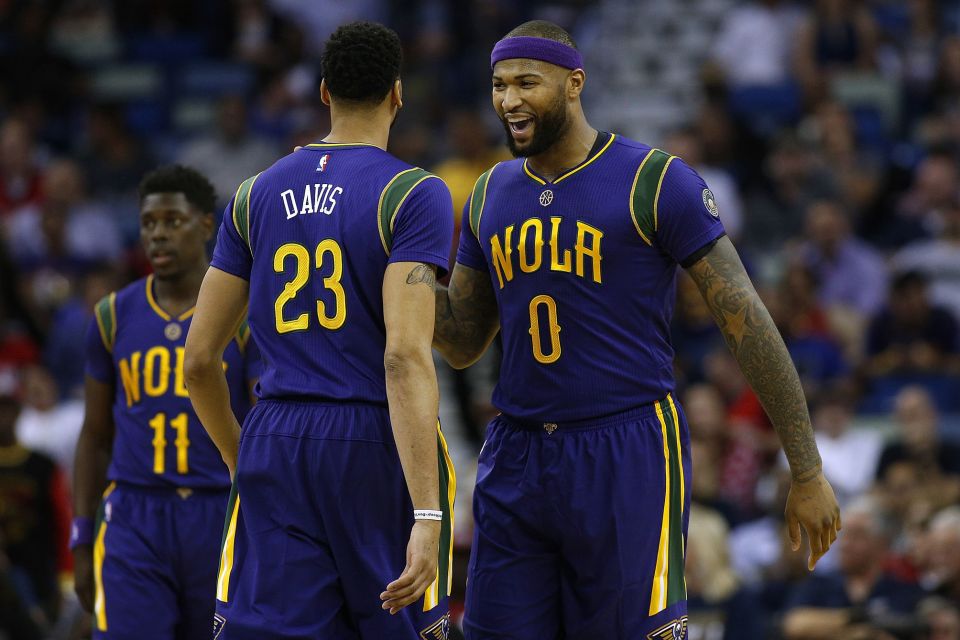 SC:  I’m with you on that one, man.  I don’t think anyone denies his talent but I’m just not quite convinced Cousins is the kind of player you want to build a team around, based strictly on what we’ve seen from him in the past.  I may be in the minority and his 28 and 11 night in and night out are just what the Lakers need but didn’t you guys just invest in another volatile and emotional center with Dwight Howard.  We all know how that turned out.

So far, Magic Johnson is saying all the right things, tempering Lakers fan’s expectations, that Rome wasn’t built in a day, that he came there with a job to do and that he’s going to do it.  I think we know by now not to be fooled by that smile.  The man is all business.  Don’t get the job done and you’re out.  Just ask Lou Williams.

Who else is on the Lakers radar that you’ve heard through the Hollywood and grape vine?

Bleed: Magic bleeds purple and gold, so I don’t question his intent at all. I think he wants to win as much as anyone and from what I gathered from his joint interview with Jeanie yesterday, he intends to stay the course with the young core we’re rebuilding around….But if that’s the case, why the drastic firing? It’s the same path Jim and Mitch were on….Whatever….Above my pay grade I suppose. 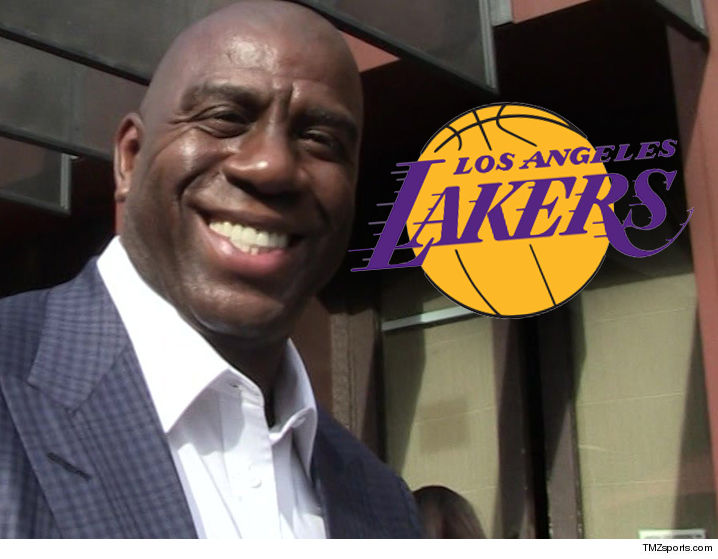 Trading away Lou Williams signaled to me that we’re officially in full on tank mode. We need to royally suck the rest of the season to make sure our top 3 protected pick doesn’t go to Philly. They didn’t want Sweet Lou shooting us into any accidental wins with one of his 4th quarter scoring explosions. I liked the guy and his stock has never been higher, but when building for the future I guess getting that 1st round pick was more appealing than keeping Lou in Magic’s eyes.

There have been trade rumors involving Jimmy Butler, Paul George and even Melo, but I think Magic’s statements yesterday ended that. Adding two more 1st round picks in the next draft and whatever off season trades or free agent signings he and new GM Rob Pelinka can pull off seem to be the path we’re on, which I agree with. I didn’t want Melo unless we could have gotten him without giving up one of our core six. If NY would take Luol Deng or Mozgov and Nick Young, I’m okay with it but not interested if it involves any of the core 6 of Brandon Ingram, D’Angelo Russell, Julius Randle, Jordan Clarkson, Larry Nance Jr. or Ivica Zubac.

I might consider parting with Randle or Clarkson if it means PG13 or Jimmy Buckets because both are young enough to grow with this team and All Stars, but again, I don’t think Magic is going to break up the band. Guess we’ll find out soon enough as the trade deadline is Thursday.

Hopefully having Pelinka as the new GM helps us navigate the CBA waters better and he’ll be more prudent with free agent signings and avoid contracts like the ones Jim & Mitch gave Deng & Moz. I think we’ll be able to move them as the cap goes up, but those two signings may have played as big a role in their exits than not netting DMC from the Kings. Besides, I don’t think the cowpoke up north could have stomached sending Cousins to LA. Must be bad enough having Shaq literally own you after he owned you as a player.

SC: I’m glad you brought up Pelinka.  I guess he had good relations with the team after brokering Kobe all those years.  Who ever thought an agent would take a pay cut to become GM of a basketball team?

I did hear one of the four-letter pundits talking about how that might be the wave of the future: more agents taking on GM responsibilities.  I’m not quite sure about that.  While they might be good with numbers and contracts and such, it sure sounds like a conflict of interest to me.

What are your thoughts on that?  And have you caught Kupchak chainsmoking butts and downing boilermakers are your local dive bar yet?

Bleed: Haha, nah…Mitch will be fine. I just read his goodbye letter to LA. Classy guy, but man did he love to incessantly say, “You know”. Drove me ape shit listening to him during interviews. Despite the pet peeve, I have nothing but love for Kupchak. He’ll be missed and if he’s interested, I’m sure there’s plenty of NBA teams that will be sending up the Bat signal for his services. 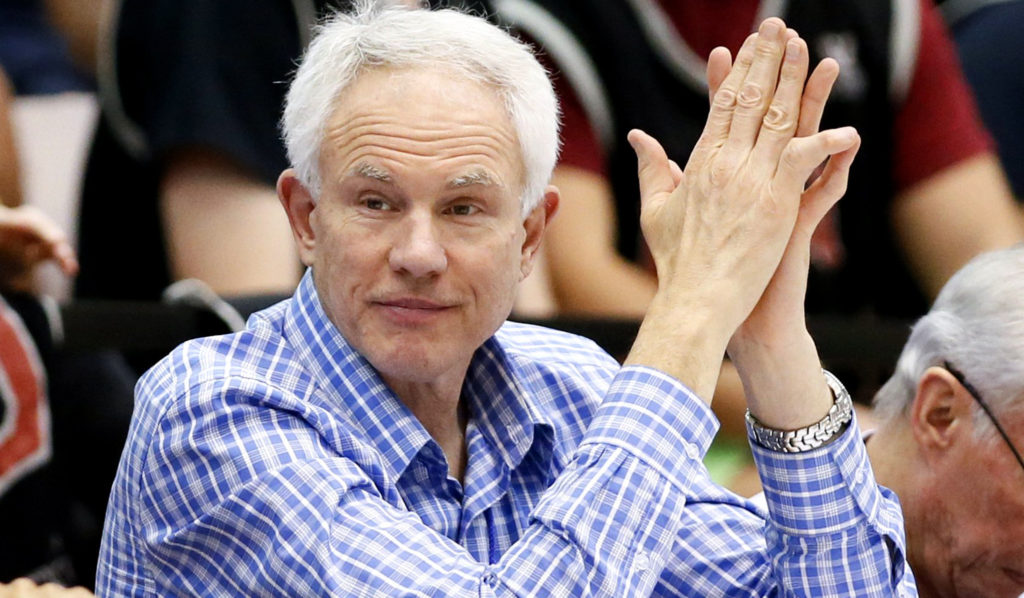 I just found out that Pelinka was part of that Michigan Fab Five squad back in the day. Found that rather interesting. This agent-to-GM thing worked out pretty well for Golden State, so it’s not entirely without merit. I suppose with the CBA being as complex an albatross as Obamacare, it helps to have someone who speaks fluent nerd. My understanding is that he’s lived here for quite a few years and has been a regular at Lakers games for most of his time as Kobe’s agent so he’s familiar with the goings on at Staples Center. He also has to cut ties with all his clients. Eric Gordon let that cat out of the bag yesterday on Twitter. Will he be the next Jerry West type exec? I highly doubt it, but I’m going to trust the powers that be and hope he can pull in some big name free agents over the next couple years and us spoiled Lakers fans can get back to being spoiled in the win column because this losing shit sucks donkey balls.

SC: Speaking of West, do you think there’s any way he ends up back in L.A. for one final curtain call.  Clearly his work is done in Golden State.  Assuming they keep that core together, they should be fine for a while.  It’d be interesting to see if West could go BACK to L.A. and help them build a team that could beat the team he built… or at least give them a run for their money.

We’ve talked about this in the past.  If THAT doesn’t solidify him as one of the greatest assemblers of talent we’ve ever seen, I don’t know what would.  He might even turn around and watch a game for once.

Bleed: I’d obviously love to see Jerry West come home where he belongs. His legacy is cemented regardless, but adding yet another chapter like the one you painted would be epic. He’s a free agent this off season from what I’ve heard, so I suppose the possibility exists. His son Ryan is a rising star in the Lakers front office fold so I would think that could potentially play a role to draw him back as well, so who knows. Phil Jackson is the personality that ran him off and now that he’s busy doing his best Isiah Thomas impression in NY, that’s one less deterrent. I’m not going to hold my breath, but who wouldn’t want Mr. Clutch amongst their brain trust? The guy clearly has the Midas touch and the love and adoration of Lakers Nation.

SC:  That about settles it then.  Bleed, as always thanks for the contribution.  Let’s hope the Lakers get back to relevance sometime in our lifetime, for the league is far more interesting when the purple and gold put on a show.

11 thoughts on “Go West, young man: A conversation about the state of the Lakers”