Tiger Woods was once the most marketable athlete on the planet.  He was as dominant as we’ve ever seen in any sport.  Five career majors behind Jack Nicklaus, he was well on his way to becoming the greatest golfer to ever walk 18.  In fact, many had already crowned him as such.

That was ten years ago.  A lot has happened since then.

There’s an old, golf adage that goes, it’s not how you start the hole but how you finish.  Let’s just say, after crushing one off the tee and hitting a fairly successful approach shot, Tiger is floundering around the green.

News broke Memorial Day weekend that he had been charged with driving under the influence.  It was an appropriate and unfortunate end to a troubled soul.

Tiger’s is a tragic tale.  Few athletes have risen so high and fallen so low.  However, as with any other tale of woe, there are lessons to be learned. 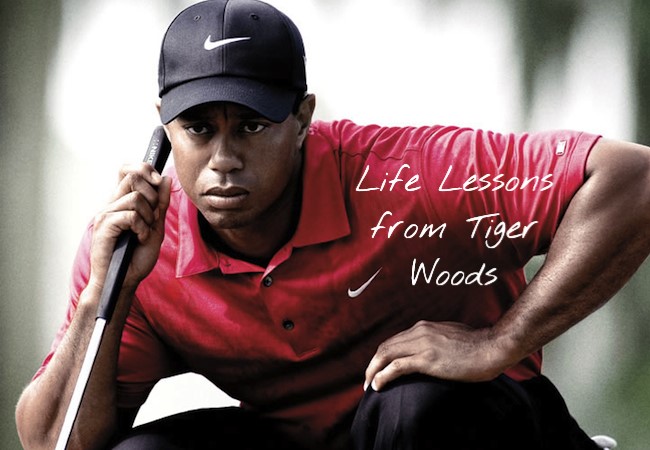 We know how that ended up.  A golf club through Tiger’s Buick, a bruise to his head we never saw the full extent of, a healthy divorce settlement and a televised apology that was difficult to watch.

America’s divorce rate hovers around fifty percent.  Few were as notable as Tiger’s.  He probably should have held off on tying the knot until he was good and ready.

I’m not joking.  I was about to go out the other night, have a few pops and see what kind of trouble I could get into.

The Tiger Woods story kept me in for the night.

See that?  Athletes CAN be role models after all.

In all seriousness, Uber exists for just that reason: to prevent the lot of us from getting blasted and getting behind the wheel of a car.  A guy like Tiger can not only afford to buy an Uber, he can afford to buy Uber.

I have no idea what “prescription” medication Tiger was taking that night #JackDaniels but it clearly put him in an eyelid-shutting sort of mood.  The sad holding cell video was evidence of that.  And whoever decided to release that tastelessness is hopefully going to hell for kicking a man while he’s down.  Is that something we really needed to see, a zombie-like Tiger all dazed and confused?

Eldrich could have afforded a ride that night.  He just doesn’t have the good judgment to figure that out.

I have a bad back.  I’m also nearly fifty years old.

My back hurts every day.

That being said, I would NEVER go under the knife.  Not even the most qualified physician is getting anywhere near my spine with a scalpel.  I have a dear friend who has recently been operated on.  His recovery is slow-going and he’s younger than both me and Tiger.

I’m not sure who Tiger consulted before getting sliced open (repeatedly, mind you) but it sounds like Woods has been sold a bag of bad goods.

And can the guys who operated on Tiger get a little bad publicity?  Aside from Tiger’s own personal demons, this batch of quacks is surgically responsible for destroying the career of one of the greatest athletes we’ve ever seen.

Can someone get the AMA on the phone?

Now starring in the latest production of “The Boy Who Cried Wolf…”  Tiger Woods!

Seriously, this guy is starting to lie more than a room full of A-Rod’s, Pete Rose’s and Lance Armstrong’s.  I’m waiting for those guys to welcome Tiger into their Liar’s Club like Steve Martin, Tom Hanks and Alec Baldwin welcome repeat SNL hosts into their five-timers club.

As sports fans, we generally forgive and forget.  We might not let you into the Hall of Fame but if you at least come clean, we’re willing to let bygones be bygones.

We’re sympathetic folk.  I’m not saying that Tiger’s had a rough life but if he just came out on Barbara Walters and said “I’m depressed,” we’d probably forgive him.

We get it.  His best years are behind him.  We don’t need any more, weepy moments of him telling us how many times he fucked up.  We know he’s fucked up.  We’ve been paying attention.

Just be sincere.  Oh, and lay off the Xanax.

After Cus D’Amato passed on, Iron Mike Tyson had nobody he could trust, nobody to look out for him, nobody he could lean on.  He didn’t know who his friends were, who was truly in his corner.  After Tiger’s father passed away, Woods was never the same, understandably.  That’s a crushing blow for even the most strong-willed.

I don’t know how many golfers on tour he considered good friends but someone should have had his back, no pun intended.

Perhaps he burned too many bridges on his way to fame and fortune.  Tiger never struck me as the kind of guy that would josh around with the rest of the players on tour.  They always spoke of him as an outsider.  Even his ex-caddy wrote a tell-all expose about his life and times with Tiger.

Friendship is not overrated.  Neither is having people you can trust.

Whoa, whoa, WHOA!  Who the hell said anything about performance enhancing drugs?  Certainly not me.

Oh wait, I just did.

There were plenty of rumors that Tiger, and his new physique, were the result of a Clemens-ian workout regimen, minus the donuts of course.

Until Tiger comes clean about any alleged drug use (the drugs that beefed him up, not the drugs that geeked him out), we’ll never know for certain if he took anything the PGA Tour might deem illegal.  Then again telling the truth has never been this guy’s strong suit.

Of course, none of that compares in importance to this guy getting his head on straight which at this point seems like a distant reality.

Few athletes have tried as hard to make people laugh and failed than Tiger Woods.

Tiger’s that guy who tries to tell jokes at the podium only to hear crickets.  He’ll elicit the occasional chuckle because people either a) feel bad for him or b) are so astonished at his lack of a sense of humor that the act itself is funny, and most certainly awkward.  It’s like laughing at something your boss says just to appease him.

A life without laughter is no life at all.  Here’s hoping he finds some soon.

In 2016, Forbes ranked Tiger Woods seventh on the list of America’s Wealthiest Celebrities.  I’m no conspiracy theorist but I find it odd that years ago, it took days for us to find out what truly happened in his private, gated community.  In fact, we still don’t know for sure.  Money sure buys a lot of privacy.

The guy we saw arrested by the cops on the side of a Palm Beach County road blew a 0.0 on the breathalyzer.  That’s all anyone said in his defense, brilliant spin from the Woods camp.  Apparently, Tiger lives in the only two counties in the nation where a black guy can get a fair shake from the cops. #OfficerDoYouTakeVisa

I get that his cult of personality ranks off the charts but the guy hasn’t played a meaningful round of golf in years.  His last major championship came almost TEN YEARS AGO!!!

He’s had more back surgeries in 2017 than birdies and more arrests than accolades.  What in the world is going on with this guy?

In the end, it’s Tiger’s life.  He can do with it as he pleases.  As a father, however, he should remember how the loss of his own father affected his life.  Far less determined athletes have overcome far worse.  It’s time for another doctor, one of the psychological variety and not one that prescribes drugs or uses scalpels, to help this guy out.

If Tiger Woods had the determination to become the most dominant athlete of his time, then there must be something left in this guy’s tank to straighten himself out.  His greatest battle remains ahead of him which is odd to say for a man that has already accomplished so much.  In essence, that’s true for all of us.

If he fails to recognize that, we’ll just continue to watch the tragedy unfold.

Don’t expect me to tune in as it does.  Some of us have already learned our lesson.

I’ve never seen Tiger work out.  I don’t know anything about his training regimen.  I do know one thing that all the greats have in common and that is that they work on their games relentlessly.  Their achievements are no accident.

Michael Jordan returned to the league after a second retirement (or third, it’s hard to keep track of his and Favre’s retirements).  His return to the Wizards is something we like to forget.  Peyton Manning could barely pass the ball in his final Super Bowl appearance.  We all get old.  Nothing should be taken for granted.  Some professions allow us to succeed as we get older.  Professional athletics is not one of them.

I don’t know how Tiger went downhill so damn fast but he’s there now.  Here’s hoping it doesn’t get any worse before it gets better.  I can hardly stand another public apology.