“Like sands of the hourglass, so are the days of our lives.”

It’s been quite the last two weeks for the National Basketball Association.  If you’re into made-for-television drama, the NBA off-season might just be for you.  At least Adam Silver is hoping so. 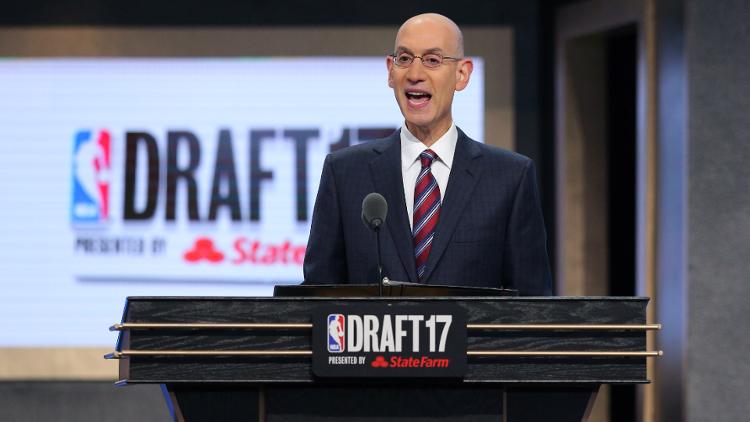 For NBA homers such as myself, the post-Finals denouement has been more entertaining than the season itself.  This is a marketing technique the NFL has mastered.  The regular season lasts only four months but fans talk about the sport all year long.  Finally, the NBA is catching on.

We haven’t played a game in two weeks but have seen more NBA wheeling and dealing than Khloe Kardashian’s Rolodex.  With free agency only a week away and 29 teams not named the Golden State Warriors unhappy in their own skin, draft week threw us a lot of faces changing places, a healthy portion of finger-pointing, a wholehearted helping of speculation and as usual, plenty of dysfunction.

Here are the last two weeks in a nutshell:

Paul George is leaving Indiana… or is he.  George has been the biggest free agent morsel this off-season.  His impending departure has even been linked to Larry Bird’s retirement as GM.  The George sweepstakes are only beginning with a bunch of teams including Cleveland and Los Angeles interested in welcoming him aboard.  But will he stay or will he go now… and what exactly is going on behind closed doors that we don’t know about?

Sources leaked that both Chris Paul and Blake Griffin will declare themselves unrestricted free agents at the July 1 deadline.  The Clippers’ third musketeer, Deandre Jordan, has also been included in a slew of trade rumors.  Their departure would leave L.A.’s cupboard quite bare and make next season’s Lakers-Clippers games look like the developmental league’s undercard.

The NBA Draft came and went with no clear-cut number one.  The Sixers went first, choosing Markelle Fultz, after receiving rights to the pick in a trade with Boston, leaving Lonzo Ball, and his father, at number two to the Lakers.  I can’t say I can recall a draft where it’s entirely unpredictable whether the top five players become All-Stars… or all busts.

As expected, Lonzo Ball stayed at home in Los Angeles.  On draft night, his outspoken father predicted his son will be the difference in the Lakers making the playoffs, which means the purple and gold would have to win about fifteen more games this year than they did last year.  Lakers fans are hoping the Ball pick works out better than their number two pick from two years ago.  That pick, D’Angelo Russell, was traded away to make room for Ball.  The Lakers moved Russell because they felt he wasn’t leader enough.  He’ll now be leading less for the Brooklyn Nets.  There were no other major fireworks from the Ball family on draft night but you know it’s just a matter of time before Poppa Ball butts heads with Magic Johnson because of his son’s playing time.  And THAT will get interesting.

Speaking of draft night, Jimmy Butler was traded from the Chicago Bulls, allegedly because his relationship with head coach Fred Hoiberg was so demeaning, it made other teammates uncomfortable.  That leaves Chicago with basically nothing more than an aging Dwayne Wade on their roster.  They’re paying him about $25 million a year, making teammates even more uncomfortable.

We also heard rumors that people within the Cleveland organization warned Butler to stay away from the Cavaliers.  Perhaps those were the same people who hacked JR Smith’s Twitter account.  The Cavaliers also fired their General Manager, David Griffin, who was instrumental in bringing them their title in 2015-16.  All he did was field a team that made it to three straight Finals.  With LeBron able to de-Cleveland-ize once again after next season, the entire city must be shuddering at the thought that this might be their final run at a championship with the big guy.  The Cavs’ 2017-18 might just feel like dead man walking.

It wouldn’t be NBA drama without including the Knicks somehow.  Owner James Dolan skipped the Draft because he had a previous engagement with his rock and roll band.  The Knicks top young talent, Kristaps Porzingis, the only reasons Knicks fans still watch basketball games, has also been on the trading block.  The heat on Phil Jackson is greater than ever to win ball games although with Dolan not paying attention, his job might be safe after all.  And just out of curiosity, who are these people going to see James Dolan play in concert?  I’m guessing not many of them are Knicks fans… or Charles Oakley.

No strangers to lottery picks, the Sacramento Kings are being hailed as the team who made the biggest splash on Draft Night… which surprised many fringe fans who didn’t realize Sacramento still had a basketball team.

LaMarcus Aldridge’s name has also been coming up in trade rumors.  Remember when LaMarcus was pulling down 23 points and 12 rebounds with regularity in Portland?  This year, in San Antonio, he averaged near career lows in both those statistics.  I guess the Spurs weren’t a good fit after all.  Timmy Duncan leaves big shoes to fill.

And speaking of not fitting, Celtics GM Danny Ainge and head coach Brad Stevens flew across the country to work out potential draft pick, Kansas guard Josh Jackson.  The only problem is Jackson cancelled the workout, leading the Celtics to take Jayson Tatum instead.  Perhaps Tatum didn’t realize the Celtics were the top seed in the East last season.

That all happened in just two weeks… and there’s plenty more to come.

Rest assured, with free agency hitting in a few more days, we’ve barely heard the end of it.  Get your popcorn ready!