I’m going to channel my inner commander-in-chief for a moment and rant about all things wrong with the NFL.  (Currently adjusting combover, spraying on fake orange tan).  Okay, I’m ready.

1 – Coaching in this league takes cojones.  If you don’t have ‘em, don’t apply for the job.

They don’t call the first day after the regular season “Black Monday” for nothing.  It’s a day when almost a quarter of NFL owners decide to fire their head coaches.  Only 12 teams make the playoffs, meaning 20 coaches’ heads might be on the chopping block, unless of course you’re Marvin Lewis who must have pictures of the Bengals owner in uncompromising positions with farm animals.

The chin-dimpled, Bill O’Brien is head coach of the Houston Texans.  His college and professional coaching resume is lengthy; he is one of the many branches of the Bill Belichick coaching tree. 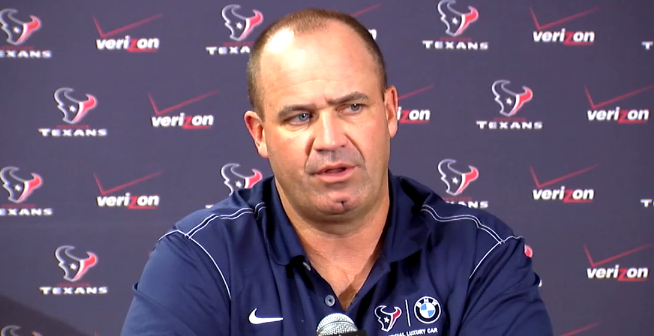 Apparently, he forgot some of what coach taught him last Sunday because, speaking of uncompromising positions, Coach O’Brien had his Houston Texans on the verge of doing something special.  A double-digit underdog going into this game, Coach O’Brien was about to knock off the New England Patriots in Foxboro.

That was when he realized he left his cojones in a jar on the kitchen counter at home.

With two-and-a-half minutes left to play, the Texans had the Patriots right where they wanted them.  Houston was up by two points with the ball in the Patriots red zone.

Facing a fourth and one and the opportunity to seal the game, and pull off the upset of the season if they could only gain one yard, O’Brien opted to send out the kicking team to take a five-point lead.  In doing so, he gave New England (and more importantly, Tom Brady) the ball back with two minutes left to play.

If you watched last year’s Super Bowl, or any game the Patriots have played over the last seventeen years, you know the rest of the story.

Tom Brady marched the Patriots downfield and scored the game-winning touchdown to rip out the Texans’ hearts and eat it over a nice wheat cracker.

In a post-game press conference, O’Brien was obviously asked about his decision to kick the field goal.  He admitted he thought about going for it but felt forcing the Patriots to drive the length of the field and score a touchdown up by five gave them the better chance to win that having them only need to get into field goal range up two.

This, my friends, is defeatist football.

In other words, GAIN THE FUCKING YARD AND SEAL THE GAME!  Houston had marched down the field seamlessly on that final drive.  Do you mean to tell me you couldn’t get one more, lousy yard?  And even if you didn’t, the Pats would still have been in poor field position.

All I’m saying is you have a nice young quarterback who appears to be your quarterback of the future.  Don’t you think a win at Foxboro in only his third game as a pro would have been career-changing for this kid?  Instead you’re teaching him to play not to lose.  If there’s one universal constant about football, it’s that when you coach not to lose… you lose.

Here’s hoping O’Brien grows a pair if he wants to stay employed in Houston.  It’s easy for this armchair quarterback to second-guess the coach in this situation but there was no reason whatsoever to not go for the first down in that situation.

For someone who once coached Tom Brady, one would think he’d have learned that with you just don’t give that man one last opportunity.  I guess some people are slow learners.

2 – A few years back, to protect the safety of its players, the league allowed defenders to just touch another player if his knees or elbows were down on the turf.  This would establish the player as tackled or down by contact.  It also ensures a player doesn’t plow into the ball-carrier unnecessarily and risk additional injury.

It was a good rule.

But I found an instant this weekend where it’s not.  Here’s what happened.

At the very beginning of the Sunday night game between the Raiders and the Redskins, Derek Carr lofted a pass downfield that was intercepted by Montae Nicholson who fell to the grass as he caught the ball.  Amare Cooper was the intended receiver.

Nicholson was touched incidentally by Cooper; they both fell to the ground as Nicholson was making the catch.  Thinking he hadn’t been touched, because it looked like he hadn’t, Nicholson got up and advanced the ball almost thirty yards… except, the play came under review.  The officials found that Nicholson was down by contact because he was grazed by Cooper, who didn’t make a play trying to stop Nicholson.  They just happened to touch.

This won’t happen but I believe the league should look at intent when it comes to tackling the ball-carrier.  Had Cooper made a play to stop Nicholson while he was down then he shouldn’t be able to advance the ball.

But he didn’t.  He just happened to be there and the play, luckily for Oakland, saved a thirty-yard return.

There should be a difference between “incidental” contact and “intentional” contact.  It seems pretty cut-and-dry for referee interpretation.  The league should be able to establish that rule without risking any more injury to its players.

3 – If you watched any NFL this weekend, you can guess what I’m going to complain about next… and again, no it’s not the league-wide protests.

The Detroit Lions lost a game they should have won because of a rule stipulation.  In the end, it could cost them a playoff spot.

With time winding down, Matthew Stafford was leading the Lions downfield.  All they needed was a touchdown in the waning seconds to defeat the defending NFC Champion Atlanta Falcons.

Stafford threw a pass to a cutting Golden Tate who caught the ball and at first glance appeared to have broken the plane.  The scoreboard added a touchdown for the Lions and the home town was in an uproar. 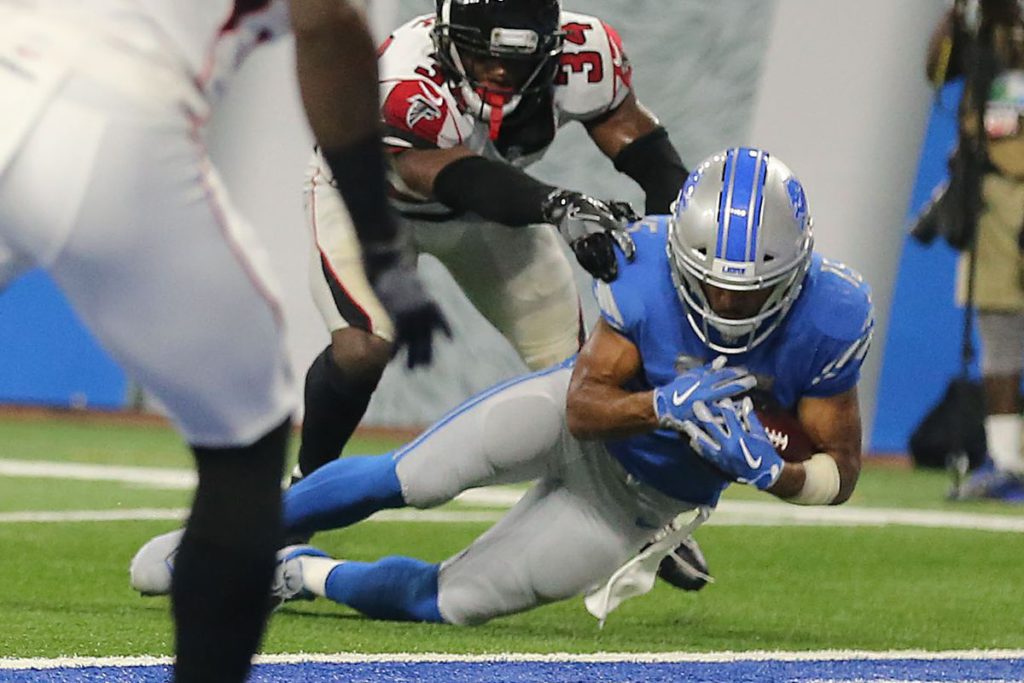 They were in far more of an uproar after the referees negated that touchdown and called the game over.

As we all know, in the NFL, time is of the essence.  The NFL’s ten-second run-off rule was designed to ensure teams couldn’t intentionally draw a penalty to stop the clock and give them a chance to win the game with the clock not moving.

That’s not what happened here.  Since the officials stopped the clock to review the play, they were obligated to enforce the ten-second run-off rule.  Since only eight seconds remained on the clock, the Lions were not allowed one more chance to score from the two-yard line, all because of a stipulation.

Wins in the NFL are hard to come by.  At least early in the season, the Lions look like playoff contenders.  It’d be a shame if they ended up missing the playoffs because of a rule that needs to be revised.

The NFL is an imperfect game.  We just saw three examples this Sunday of just how imperfect a science it is.  If only, we didn’t love it so.

28 thoughts on “Three things that pissed me off about the NFL last weekend (and no, the kneeling wasn’t one of them)”