I watch football, both college and pro regularly, probably an unhealthy amount.  I analyze it, talk about it with my friends and spend much of my Sundays on my sofa watching pregame coverage, post-game analysis and obviously the games themselves.  I wager on them, play in eliminator pools, as well as fantasy football and pick ‘em leagues, not only because I enjoy them but also because I’ve turned a profit doing so.  I recognize that the sport, for me at least, has generated an alternate source of discretionary income.

I may be a dying breed, however, for as many people as there are looking forward to this NFL season, there are equally as many still perturbed about the anthem issue and they are striking back.  I know of several bar and restaurant owners that are refusing to purchase the rights to air NFL games.  Whoops there goes another NFL gaffe. 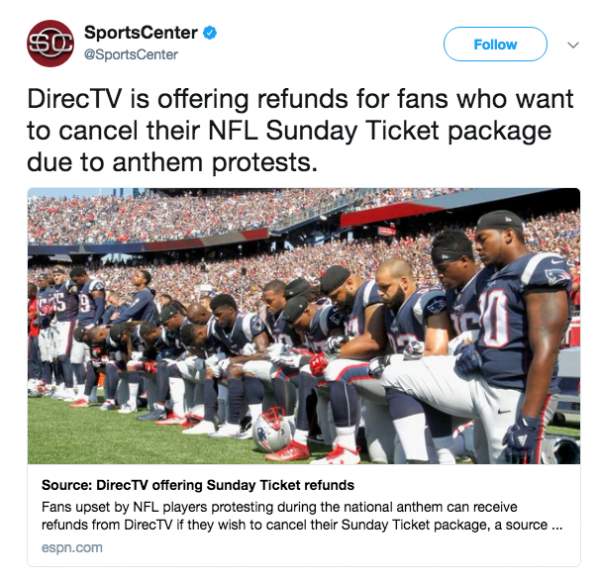 I feel I fairly understand both sides of this argument.  You can call it straddling the fence, I call it looking at the issue objectively, which I’m afraid is something league representatives have still failed to do.  What’s the rush?  I mean, it’s only been two years.

I can see where the owners (and fans) feel players should stand for the anthem out of respect for those who have defended it.  I can justify team owners and even the league either fining or firing players, putting their commitment to the test.  After all, they’re the bosses.  When my boss tells me what to do, I do it.  However, I can also sympathize with the players who want to use their position to voice their concerns about the issues of our day.  As long as they’re doing so constructively, that can prove to be a healthy form of protest.  The irony here is that we criticize our athletes for not taking a stand yet when they do, we come unglued. 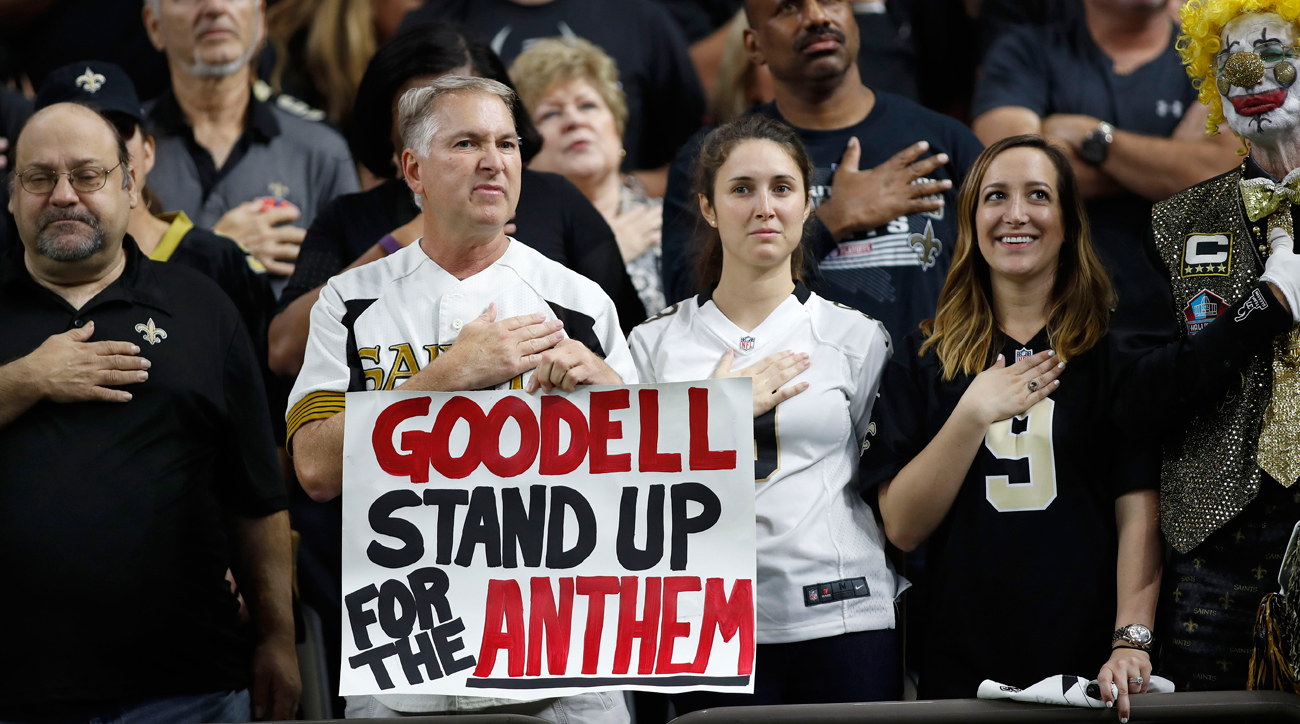 I’ve never not stood for an anthem.  I’ve never not removed my ball cap when the song plays.  But I understand why those who have would.  It still astonishes me that the NFL, a ten billion dollar a year industry, can’t get out of its own way on this issue, an issue Americans are very passionate about, even more so than they are football.

I see the anthem issue as a league problem, not a player or owner problem.  What if this was happening in another league and not the most popular sports league in America?  What if there wasn’t so much money involved?  What if the players involved in these anthem protests weren’t primarily black?  Would another form of protest have sparked this much controversy?  And where the hell is the league solidarity?

Prior to all this rigmarole, the NFL set strict rules on self-expression.  Players weren’t allowed to paint their cleats or have anything on their uniforms that would interfere with “the shield.”  In fact, it wasn’t all that long ago that the NFL wanted its players to come out for the anthem so that the league would be seen as more patriotic.  Boy, did that strategy backfire! 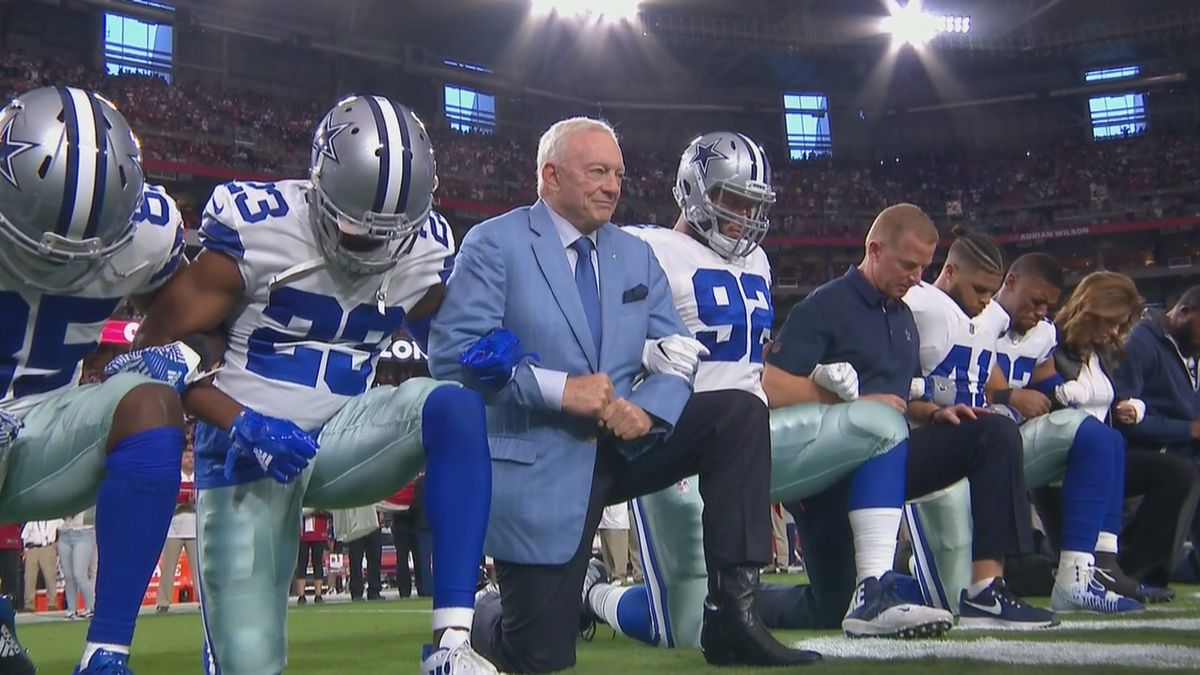 The reason I continue to bring this issue up, aside from the fact that it still hasn’t been resolved, is that new information has come to light.  I know of several business owners of key establishments, who have openly refused to purchase the NFL’s product.  By doing so, they themselves are losing money but they, like the players, are standing up for what they think is right.  Just as I can’t blame the players for taking a knee, I can’t blame the business owners for taking a stand.  Be prepared, football fans.  These days, it might be harder than you think to head out to your local watering hole and catch a game over a pint and some wings.  And when you do go to a place that used to show the ticket and no longer does, what will your response be?

I’d be willing to bet NFL ratings drop this year.  The league is desperately clinging to legalized gambling and fantasy sports to keep people’s interests.  It’s working on me but little do they know that I’m just using the league for my own benefit: nice relaxing Sundays and the occasionally cashed ticket and conquered fantasy football league.

As it turns out, there IS such a thing as bad publicity.  Business owners may be boycotting the NFL because of how it’s handled this mess, which is likely.  Or they may be protesting the players’ actions, which is far more likely.  Either way, no matter how they spin the sales statistics and turnstile numbers, the NFL is bound for decreased viewership and lost revenue.  The league had nowhere to go but down; the NFL’s lack of leadership is a direct correlation.

Five years from now, Commissioner Roger Goodell will be kicking it in the Caribbean, never to be heard from again, resting comfortably off the 40 mil a year the league paid him to be their puppet.  Much like Selig and steroids, this whole anthem debacle happened under Goodell’s watch.  His inability to resolve the issue will lowlight his legacy.  Well, that and that whole CTE thing.

Years ago, I wrote the most important thing that could come from this all was the emergence of any sort of constructive dialogue.  That never happened.  As a result, people are taking their money and spending it elsewhere.

I can’t say I blame them.

20 thoughts on “Local business owners show NFL how to protest”