What better way to spend a depressed afternoon than with a triple feature starring zygotes, dread-locked aliens and a giant, prehistoric shark?

I’m not a huge action movie buff.  Don’t get me wrong.  I’ve seen plenty of ‘em.  I just prefer a touch of plot and dialogue with my films.  Over the years, however, I have mastered the art of the movie theater triple-feature for the only way to truly enjoy schlock is to immerse oneself in it fully.  Nothing screams sullen afternoon more than spending a day at your local cineplex, especially when you can land three films at the price of one.

When I saw that The Meg, The Predator and Venom were all playing at the theater down the block, all on the same day, I jumped at the opportunity.

Before I get to the review of each of these films, I should first let it be known to those of you who actually pay for every movie you see that there is strategy involved when embarking on such an endeavor.  You must know when to buy your popcorn and chocolate, perhaps even to bring a hat or sweatshirt so as not to stand out in a crowd.  The last thing anyone needs is a teenager with a responsibility complex escorting you out of the theater.  How embarrassing would that be?  Normally, movie theater people don’t care whether you sneak into another movie after paying for the first one, as long as it’s not super crowded.  They make most of their money off concessions anyway.  Trust me.  I paid $4.29 for a damn bottle of Dasani.

It also pays to know what time each flick starts, how long they run and where their specific showings are located so you can duck in and out unnoticed.  You can also lose the previews when watching three separate flicks in a day.  While I am a huge fan of previews, seeing three films of the same genre meant many of them would be repeats.

For the record, I have never, EVER, been caught and I’ve been theater-dodging for decades so this is your opportunity to learn from the master.  And for those of you morally opposed to triple features, I should remind you that Hollywood has enough of our money. 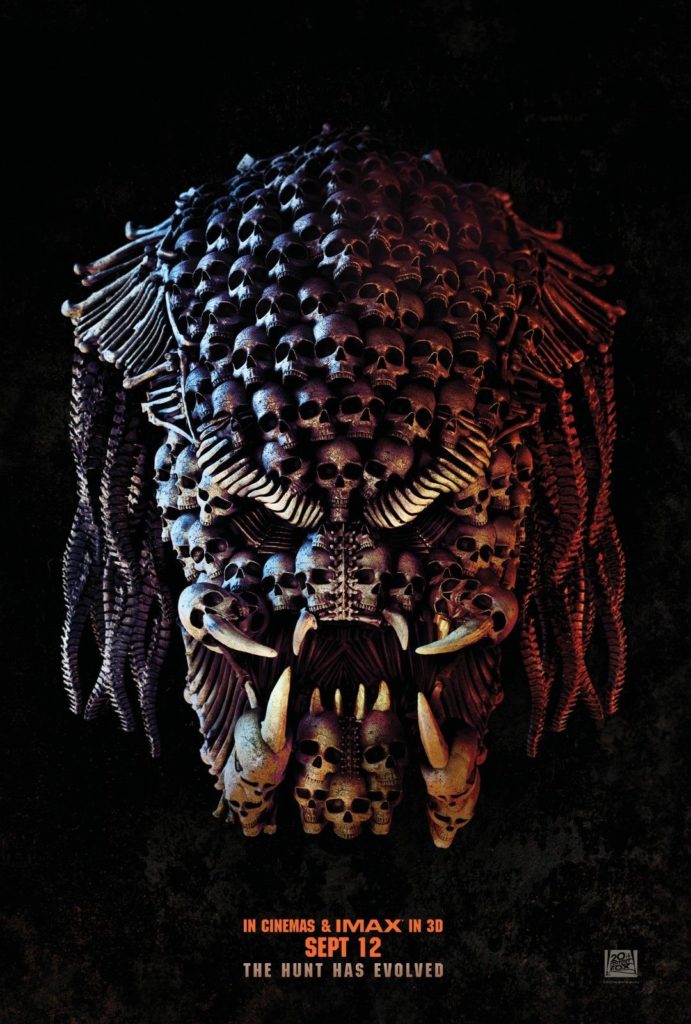 The first feature film of the afternoon was The Predator, a 4:45pm start with a 1:45 run time.  The Predator is the sixth film in the series, if you include those pretty unwatchable Alien vs Predator movies.  The original is an 80s action classic starring Arnold Schwarznegger and his band of muscle-bound warriors getting offed one by one in a Central American jungle by an alien with dreads, laser beams and a desperate need for a manicure.

The problem with most sequels not named Rocky is that they suck but I had heard good things about this latest Predator movie so I decided to give it a go.

In 2018, the predator has come back to Earth, again.  A military sniper, your protagonist named Quinn MacKenna, happens upon a predator after its space ship crashes.  McKenna sneaks away the predator’s gear and sends it to himself at a P.O. Box but it ends up getting delivered to his home and his autistic son instead.

Government agents try to put MacKenna away, hiding their secret that they know about the alien and saying he’s crazy for having seen one.  They ship him off to the looney bin and the bus ride there is where he runs into his band of misfits, all with a screw loose.  Keegan-Michael Key co-stars for comic relief.  The movie is chock full of references to the original, complete with a “get to the choppers” line, a thoughtful throwback for all us old folks.

It isn’t long before the sedated, captured predator escapes from his government laboratory confines, opens up a can of whoop ass and searches for the gear the sniper lifted from him.  Back home, MacKenna’s son has opened the box and fiddled with its contents.  He even ends up wearing the predator’s faceplate out for Halloween.  I mean who wouldn’t want to be Predator for Halloween?

This time around, however, there’s not just one predator.  There’s a bigger, more evolved predator… and he brought dogs.  What can I say?  It’s a Predator movie that is not entirely unwatchable and is probably the best since the original which can’t be all that difficult considering the others were horrid.  The Predator never apologizes for its cheesiness, even relishes in it. After all, it was a movie that Arnold made famous so how life-changing can it be?

If you’re into action flicks, some witty dialogue and are a fan of the original, I’d say The Predator isn’t entirely a waste of your time.  I’m giving it three-and-a-half Schwarzneggers. 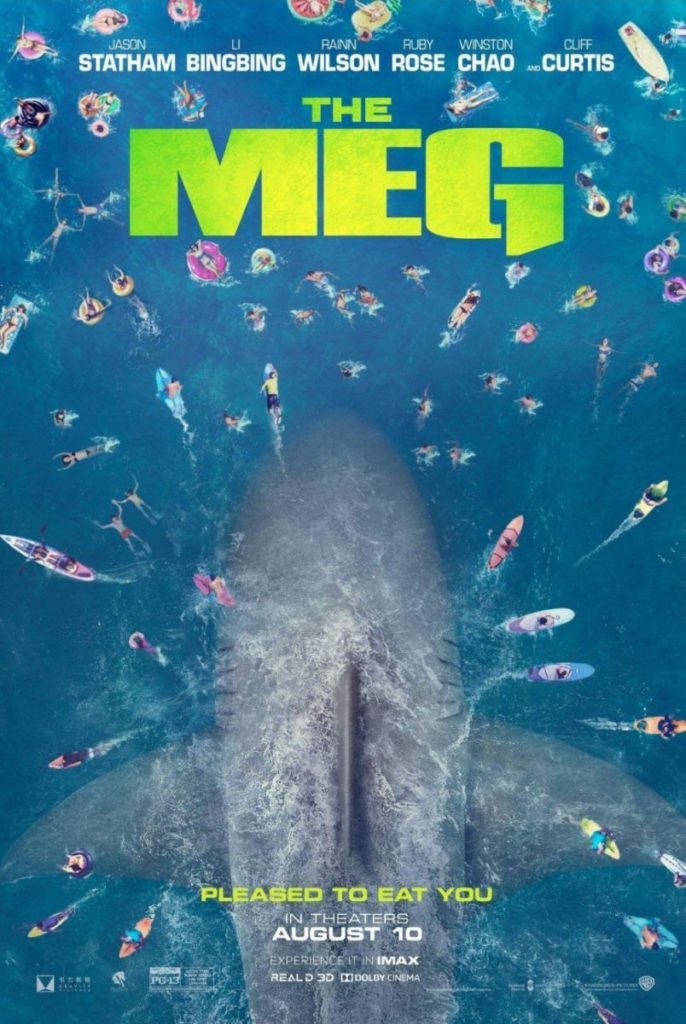 Next on our little stop of horrors was The Meg which is short for Megaladon, which is even tough for the raspy-voiced Jason Statham to say.  The film, if you didn’t know, is about a giant prehistoric shark.   My showing started at 7:30 which meant I had a little time to kill in between my first and second features.  I walked nonchalantly to the concessions counter as if I had just walked into the theater and made my purchase.  Little did the popcorn pimp know I had clocked in two hours ago.

I figured Meg’s 7:30 tee time would put me right on time to sneak into the 9:30 showing of Venom.  Again, gotta plan ahead.  Since this was Venom’s opening weekend and showing in multiple theaters at different times, I knew I could always leave early and catch Venom in case the shark movie sucked, which was extremely likely.

I’ll be honest.  I haven’t seen that many (any?) good shark movies since Jaws.  Spielberg and Benchley broke the mold.  Sure, Deep Blue Sea is occasionally entertaining but only because you get to do an impression of Dave Chappelle doing an impression of Samuel L. Jackson.  In my eyes, there is Jaws; every other movie starring a shark pales in comparison.

Accordingly, my expectations for The Meg were low but I was definitely in the mood to see a shark eat some shit after I had just seen a predator blow up some shit.  It was that kind of Thursday.

Like Predator, The Meg starts out with a fast-paced action sequence and why not.  It’s an action movie.  Type cast Jason Statham is a deep-sea, search-and-rescue guy with a past.  Rainn Wilson from The Office fame is a billionaire funding a project to find new life forms below the ocean floor.

An exploration sub gets trapped down below and the powers that be recruit Statham to save the crew, which coincidentally holds his ex-wife.  One would think 10,000 meters below sea level is exactly where one would like to keep their ex but I digress.  Turns out Statham has a soft spot after all.

Oh, and get this.  Statham’s character’s name is Jonas in case that biblical reference flew right over your head… Yawn!

After Statham rescues the crew, the giant shark escapes from its subterranean habitat and unfortunately doesn’t bring any hearty dialogue with it.  At least it eats whales for our enjoyment (Note: no whales were harmed in the making of this movie.  Only our sensibilities).

In order to better track the beast, as if they couldn’t tell a thirty-foot shark was headed their way, they send Statham into the ocean with a spear gun to implant a tracker in the shark.  I’m not sure why he couldn’t have just done this from the boat but I went with it.  As you can tell, this plot is already far less realistic than Predator. They later send Statham’s love interest, a young Asian lady (apparently Statham’s ex had moved on) into a Dreyfus-like cage to try to kill an animal that’s a million times her size.  Show me the way to go home.

By 9:00, I wanted to leave but I figured the film couldn’t get any worse.  There were plenty of Venom showtimes available and I wanted to see which annoying character would be offed next.  So, I stayed.  And they needed a bigger boat.  And maybe Aquaman, Robert Shaw, some CO2 tanks and a better scriptwriter.

They end up catching and killing the Meg only to find out there is actually a second Meg.  Since we’re getting biblical, I’ll blame Noah for that second one.  Hey, they started it.  Finally, the Meg swims close to shore and eats a whole bunch of unsuspecting, sunbathing Asians, which doesn’t make much sense considering a shark of that size couldn’t swim that close to shore, not even for Chinese food.

You can guess how it ends but at least it did end.  I’m giving The Meg one-and-a-half Roy Scheiders, who could have killed the shark with his rifle from a sinking boat and saved us all the corny and contrived dialogue. 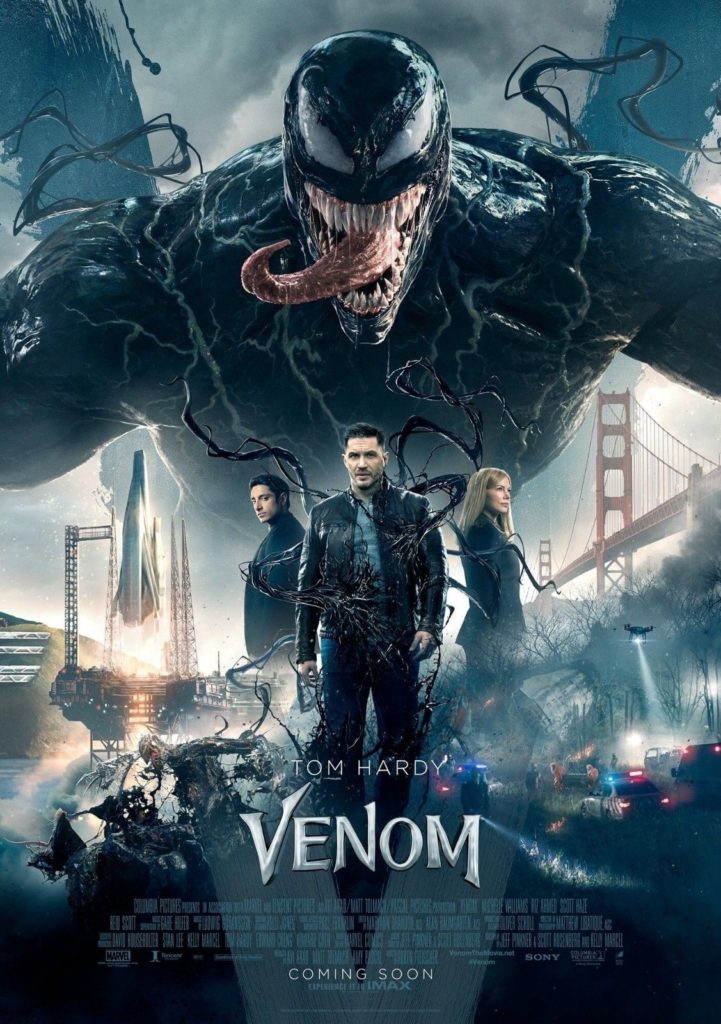 As it was opening weekend, the theater was packed.  As a contrast, I was literally the only person in the theater for The Predator and one of two people watching Meg.  That Stan Lee is quite the draw.

Eddie Brock, played by Tom Hardy, is an investigative reporter assigned to cover a corrupt billionaire who is into rockets and space exploration for natural resources.  Brock asks one question too many of the evil genius after he is warned not to do so and ends up losing his job as a result.

You see, some precious cargo got out of the billionaire’s rocket during a crash landing and only his inner circle is privy to its contents.  The cargo is a material that is set to terrorize the planet as we know it or at least turn people into giant-tongued, creepy looking spider people.  (Hey, at least it’s not another giant shark!)

The billionaire wants to begin testing this material and eventually does so on human volunteers, looking to find symbiosis in between the material and his human subjects.

Upon snooping through the testing facility, Brock gets infected with said material and turns into Venom, after which he kicks more ass than Predator and the Meg combined.  Venom’s character is like most other Marvel characters in which they first struggle with their new identity until they eventually realize having superpowers is kind of cool.

Venom also features a fair amount of comic relief and is visually stimulating but again, like so many other Marvel films is a great story about a great character but with a recycled plotline.  It wasn’t horrible.  I’m sure there are comic book geeks out there that will tell you it’s the next great Marvel movie.  I’m just not one of those geeks.

I give Venom three Peter Parkers and the rest of my leftover popcorn.

7 thoughts on “Thursday’s triple-feature: The Predator, The Meg and Venom”