When I walk into my local casino, there is no sportsbook. 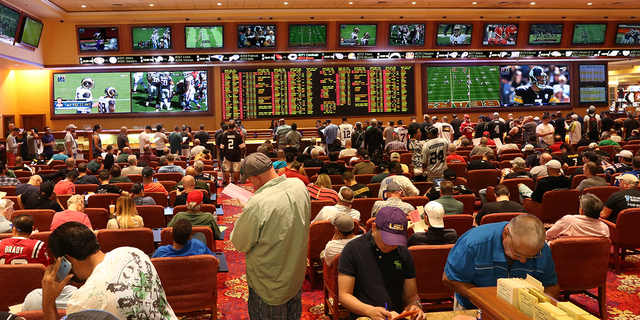 There are a few reasons for that.  First, sports gambling is illegal in Florida.  One can frequent a local track to play poker or gamble on the ponies but betting on the Bucs is strictly verboten.  For the longest time, sports leagues didn’t want to be in any way associated with wagering for fear of scandal.  Those days are long gone.

Gambling laws also exist to protect us from ourselves.  Just like alcohol and drugs, gambling can be addictive.

All that is fine and dandy but the real reason sports gambling is illegal is that it’s a tremendously risky endeavor for the casinos themselves.  In fact, casinos often stand to LOSE money on sportsbooks while other gaming like slots and table games consistently turn a substantial profit.  Trust me when I tell you.  If the powers that be wanted sports gambling legalized, it would be.

Take last weekend for example.  At first glance, Week Nine’s lines didn’t shout out at me… but I got ‘em all right.  Five for five.  In fact, every single one of us in this contest landed positive numbers last week and we’re just gambling for the fun of it.  Imagine what happened when the sharp bettors walked into the room.  One sportsbook called last week a top ten all-time bloodbath.  Vegas lost millions.

Now let’s head back to your local gambling spot for a moment, which has far less capital than the Bellagio or Caesar’s Palace.  If some shark walks into your local gambling facility and finds lines that are just a little off, he can sink their battleship.  You can’t tell me your local track has millions at its disposal to pay one lucky buck who places the right wager.

It’s why your smalltime bookie doesn’t take money line bets and why your local Hard Rocks are not chomping at the bit to push for legalized sports gambling.  They know me and my merry band of gamblers will be coming for ‘em.

So, to all of you I say, nicely done.  But Rome was not built in day.  Let’s see how many of us can keep it up in Week Ten.  Here are this week’s NFL lines.  Considering Vegas took it on the chin last week, you’ll soon see that if you want to bet a favorite, you’re going to have to lay more points than you might be comfortable with.

And now for your updated standings:

Betting on the Lions is like taking freshly printed twenty-dollar bills, dousing them with gasoline and setting them on fire.  They have a brand, new coach who is more concerned with reporters’ postures than he is his own winning percentage.  They just traded away their top target at wide receiver and are generally considered one of the most underachieving teams in the NFC.  That being said, I still have a tough time believing the Chicago Bears are the class of that division.  The Bears have beaten up on some bad teams lately but when they’ve faced the more competitive teams in the league, they’ve struggled.  They’re good at home and while Detroit doesn’t necessarily travel well, their season is essentially on the line.  I like Detroit enough to keep this one close so I’m taking the points.

I’m in a taking mood this week.  Green Bay is coming off two heartbreaking losses in a row to the Rams and the Patriots.  Aaron Rodgers did his thing during those games but the one man show just wasn’t enough.  This weekend, they return to the friendly confines of Lambeau Field where they take on the 5-4 Dolphins who have been surprisingly competitive this season.  The Packers desperately need a win here but so does Miami.  Everything shouts Green Bay victory here but I’m just not sure this team is good enough to beat Miami by nine-and-a-half points.  I’ll take Miami to keep it close.

The Kansas City Chiefs are the Golden State Warriors of the NFL.  They even have their own baby-faced assassin, your strong MVP candidate, Patrick Mahomes.  The problem Las Vegas faces with teams that are that explosive offensively and that far ahead of the pack is that they can’t stay ahead of the lines.  Consider that problem resolved, at least temporarily.  This week, Vegas strikes back.  If you like the Chiefs, they’re going to make you put your money where your mouth is.  If 16.5 points isn’t the biggest line of the year, it’s pretty darn close.  In other words, I hope you made your money on Kansas City while you had the chance.  Makes no matter to me as I’m not afraid of a challenge.  The Chiefs ARE that good and the Cardinals ARE that bad.  I’m not intimidated by the two-TD-plus line as the Chiefs can put up points at a Steph Curry-like pace.  They’re still money against the spread this year so I’ll be bold and lay the big number.

Tennessee is one of the least exciting teams in the NFL to watch although seeing them handle the Dallas Cowboys on Monday night was admittedly pretty enjoyable.  This week, on a short week, they host the New England Patriots who, while playing well at 7-2, are still the walking wounded.  Their star young running back is out, their tight end is iffy and they just put their center on injured reserve.  If the Titans are good at one thing, it’s keeping football games close.  I’m taking the Titans and the points thinking they give New England a healthy battle in Nashville.

The Saints are for real and I’m probably going to regret this but I’m taking an AJ Green-less Cincinnati team at home plus the points.  These are not your father’s defenseless Saints and they just added more firepower on offense by adding Dez Bryant at wide receiver.  After beating the Rams at home last week, New Orleans proved they can play with (and beat) anyone in the league.  At 7-1, they are the class of the NFC.  The Bengals, however, are no slouch and are still very much alive in the AFC North at 5-3.  They’re also coming off a bye week.  I think Cincinnati turns some heads this week and keeps this one close.

The bayou Tigers
Outshine all in NFL
Like Queen City cats

Washington D.C.
Still not as dysfunctional
As all Florida

The SportsChump – my key competition – is taking the Bengals in this one.  Someone send a spy over to his place to find out what he knows.  Seriously, outside of the home field advantage, what’s there to like here?  A.J. Green is out for a few weeks.  Top weapon: unavailable.  Sure, Joe Mixon is having a good year, but the Saints are #1 in the NFL against the run.  If that isn’t enough, New Orleans has allowed the fewest sacks in the league (9 in 8 games), too.  They also just knocked off the undefeated Rams – and if that’s not enough, the Saints also signed Dez Bryant this week.

Colonel: We’ve had reports that there’s a spy in the Ministry of Defense. The contents of this room are vital to the country. Be on special alert.

Colonel: And, uh, try to lose some weight, for God’s sake.

You know where I’m leaning.  No need to spy on me.  Give me the Saints to cover on the road.

Could the Falcons be turning the corner?  That’s three straight wins, including last week’s 38-14 thrashing of the Redskins on the road.  The Browns, meanwhile, continue to land in the headlines for all the wrong reasons.  This time, it’s Todd Haley not being the interim head coach.  No matter what the story, Cleveland allows an NFL-high 33 sacks.  Atlanta just signed Bruce Irvin and Deion Jones returned to practice this week.  Yes, Atlanta’s defense could be joining the offense in “mutated ill tempered sea bass” like fashion.  That could be worrisome for the NFC – and not just the Browns.

In the end, do we really expect Baker Mayfield and Co. to stick with Matt Ryan, Julio Jones, Tevin Coleman, Calvin Ridley and the gang?  No, we don’t.  Falcons cover on the road.

Oh, it’s you, New England.  You show up in these parts every week.  Yes, I picked against you last week.  Yes, it’s my lone loss in the last three weeks.  No, I don’t have a man crush on Aaron Rodgers.  “I like to live dangerously”.  No, I won’t do it ever again – I promise.

Oh, right, the game.  This is another SportsChump special (he has Tennessee, y’all).  Look, Dion Lewis is the best player on the Titans right now and this is a so-called revenge game for him, facing his former team.  But what do the Pats do best?  Shut down a team’s best player.  That leaves an inconsistent Marcus Mariota and Corey Davis to have to carry the load.  Sure, New England is a bit banged up, but they have been for weeks and has that slowed them down?  No way, not even against a very solid Titans defense that is 8th against the pass.

Guys, the Raiders are a hot mess.  Jon Gruden has a contract for a “kajillion bajillion dollars”.  Outside the Amari Cooper trade (which yielded a first round pick), it has been a painful season full of bad decisions.  Heck, Oakland made Nick Mullens look like a Pro Bowl Hall of Famer in one start.  Enter Philip Rivers, Keenan Allen, Melvin Gordon and the Chargers.  The more I write about it, the more I wonder why I have this game set at two confidence points.  Maybe it’s Oakland’s home field.  Perhaps it’s the division rivalry.  It could be the ten point line.  Either way, expect L.A. to keep rolling.

Chargers cover on the road – and in a big way.

Hey look, the Rams are vulnerable.  Fine, every team is against the high-octane Saints.  Sure, Seattle isn’t at the same level as New Orleans.  However, dating back to 2012, the rivalry between the Seahawks and Rams has seen a number of close games.  In fact, 9 of the 13 games between these two teams has been decided by a touchdown or less.  That includes L.A.’s 33-31 win in Seattle in October 7th.

But the Rams…at home… the talent they have… coming off a first loss… angry, ready to bounce back in a big way… aren’t you going to look at the statistics and compare this a bit more?  No, no, no… I’m just going to stick with this call and assume it all went to plan – WHAT?

“Close the tank!”  Because the Seahawks keep this one, well… close – again.

7 thoughts on “Week Ten: The bettors strike back!!!”