An American woman and a Frenchman walked into a bar the other night and yes, this is the beginning of a bad joke.

The Monday Night score-fest played on every television set.  Two of the league’s most exciting teams, the Kansas City Chiefs and Los Angeles Rams, gave us a performance for the ages; it was the NFL’s wet dream.

There wasn’t a person in the bar who wasn’t glued to the nearest TV waiting to see how, and how soon, the next team would score.  Rams!  Chiefs!  Rams!  Chiefs!  It was the first time in league history that two teams would score over fifty points in the same game.

Touchdowns were put up at a record pace.  The game featured three defensive touchdowns, one receiver gaining over two hundred yards, one quarterback passing for six touchdowns, his opponent passing for three and rushing for another.  It was Tecmo Bowl come to life.

Yet the woman, a self-professed baseball fan, complained that she hated the NFL.  “Nothing ever happens,” she said.  Scratching my head, I looked up to see the Rams score yet again. 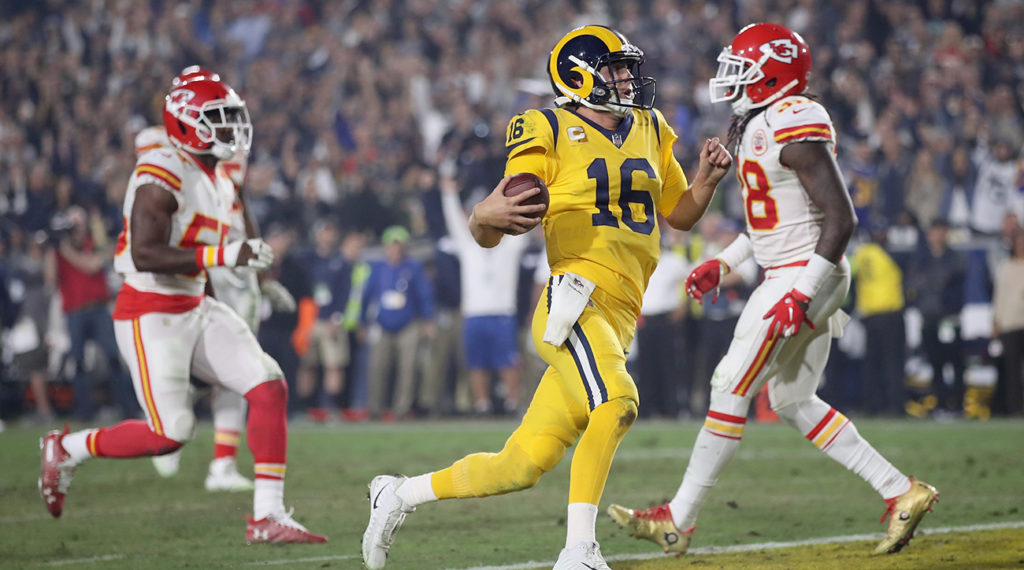 This was literally the most exciting game the league has given us in years and still this woman complained.  I guess the moral of the story is you can’t please all of the people all of the time.

Fortunately, that’s not the case in this contest as everyone who is still playing has more than a fair shake at winning $100.  If you’re not participating, that can only mean Santa already got you everything you want for Christmas.  There are plenty of weeks left to make a move.  You just need to make the right ones.

I’ll leave this week’s introduction at that.  Keep in mind, there are THREE GAMES ON THANKSGIVING THURSDAY so if you want to pick those, you better get ‘em in quickly.  Enjoy your holidays and enjoy the football.

Here are the latest standings, football lines and a few more bound-to-be-wrong predictions.

If you’ve been paying attention at all this season, you’ll know I’ve been pretty down on the Bucs.  And why wouldn’t I be?  As a fan of this team, let’s just say they’ve been very hard to watch without a drink in my hand.  So why am I picking them this week, you ask?  Here’s why.  This season is as dysfunctional as I can remember which is saying something considering this franchise has been characterized by dysfunction.  In a matter of months, they’ve gone from beating the Saints to losing to the Giants.  The carousel that is their two starting quarterbacks continues to go round and round with Winston this week getting the nod.  It would appear at first glance that the Bucs are ready to part ways with Winston but not so fast, my friends.  Winston might not just be playing for his job here in Tampa but auditioning for a gig elsewhere.  Just when the Bucs thought it was safe to part ways with their former number one draft pick, I see Winston lighting up the Niners adding even more confusion to an already confused mix.  For no reason other than that, I like the Bucs to cover the 3.5 against the Niners.

I’m calling recency bias on this one.  The Pittsburgh Steelers struggled on the road to beat the Jacksonville Jaguars which means they’re not that good.  The Denver Broncos just went on the road to beat the Los Angeles Chargers which means they are.  That’s all find and dandy until we consider that the Steelers are 7-2 and the Broncos are 4-6.  The Steelers are a playoff team and the Denver Broncos are not.  I’ll take the Steelers in Mile High to cover the three for no reason other than I feel they’re the better team.

Of all the bizarre statistics we witnessed last weekend, none is more bizarre than the coincidence of Alex Smith’s season-ending injury.  Not only did Smith suffer the same injury as former Washington Redskins quarterback Joe Theismann 33 years ago to the day but Theismann was in attendance for that game, the injuries both took place on the 40-yard line and the final scores of both games was 23-21.  That’s just creepy.  What’s creepier is that the Redskins now look to Colt McCoy to take over for a team we once thought would win that division.  The Cowboys who are only one game behind Washington in that division are now licking their chops at facing a team that might not be able to recover from that injury.  McCoy returns to Texas where he played his college ball but the Cowboys will have too much for him and the Redskins as they look to make a mockery out of their division rival on Thanksgiving Day.  Cowboys owner Jerry Jones recently told the media there wasn’t a price that he’d sell his team for.  That imaginary number gets even loftier after a big turkey day win.  Cowboys cover.

I got burned by the Raiders last week bad.  I figured this team had given up, that even the lowly Cardinals could cover a minimal spread against them at home.  They couldn’t.  The Raiders won outright.  I’m not suggesting that the Raiders have turned over a new leaf and are in any way good.  I’m just saying that the Ravens with a brand, new starting quarterback and perhaps quarterback of the future shouldn’t be 10 ½ point favorites over anyone.  Lamar Jackson ran the ball 27 times last week in a win against the Bengals.  That is not a recipe for success.  Coach Gruden will be reviewing those tapes and finding a way to, if not at least stop Lamar Jackson, do so enough to keep this one close.  I’ll take the Raiders and the double digit spread.

Chicago Bears at Detroit Lions (+3.5) FOR ONE CONFIDENCE POINT

I’ve lost more money on the Detroit Lions this season than any other team.  I should really start betting against them.  I willnext week.  The Bears announced they’ll be starting Chase Daniel over the injured Mitchell Trubisky.  This is not a must-win for the Bears.  It IS a must win for the Lions whose season, with a loss, for all intents and purposes is over.  I’m getting three-and-a-half and a team which has put together a winning streak of one (impressive for the Lions).  It’s at home, on Turkey Day, I’ll take the Turkeys…. er, Lions and the points.

Wrap Up the NFC North

On back of kitties

The line not insulated

Better for omelettes than football

Could be waged on the short bus

If England or York

Does not matter, battle New

FIVE – New England Patriots at New York Jets (+9.5)
Both teams come off a bye, which gives these two major markets plenty of time to spread a ton of stories in the media. With the Patriots, there is no panic. In New York, it’s a different story. Todd Bowles and his job security are a major headline at the current time.

Enter a pivotal AFC East rivalry with the well rested Patriots. Sam Darnold (foot injury), meanwhile, is not practicing and could miss another game. Plain and simple, do the Jets have the horses to keep up with New England?

“Was that seat hot or what? I feel like a Whopper. Turn me over, I’m done on this side. I’m afraid to look at my ass. There’ll be griddle marks.”

Fire up that resume, Todd. The Patriots cover big on the road.

FOUR – Jacksonville Jaguars at Buffalo Bills (+3)
The real question is simply, “How will the Jags respond after a heartbreaking loss to the Steelers last week?” Jacksonville appeared to be back, at least on defense. A wasted opportunity is gone, but there’s still time to recover. Enter the Bills and a game that is certain to be a defensive battle.

Let’s start with the pass defense. Buffalo is first in the NFL (202.4 ypg allowed) and the Jags are third (210.2). So, good luck throwing. “We’d have more luck playing pickup sticks with our butt-cheeks”. Add in the Bills, being dead last in passing offense and 3rd in sacks allowed (34) – “you’d have more of a chance to find a three-legged ballerina”, well… yeah, you get the idea.

Toss in Leonard Fournette, who has 52 carries over the last two games and I see the Jags wearing down the Bills defense over the course of the game. Give me the Jaguars to cover on the road.

THREE – Pittsburgh Steelers at Denver Broncos (+3)
There’s one piece of Pittsburgh’s success that does not get enough attention. The Steelers have allowed the third fewest sacks in the NFL (14 in 10 games). On the flip side, the Pittsburgh defense leads the league in sacks, with 37. “What do you think? You think this is a good combination?”

“No, probably not.” Even so, Denver has tons of talent on defense, especially in the trenches. Yet, the Steelers have such a lethal combination of weapons on offense, with Big Ben, James Conner, Antonio Brown and JuJu Smith-Schuster. Sure, the Broncos do come off an emotional last second win against the Chargers last week, but can they replicate such a performance two weeks in a row?

I don’t think so. Steelers cover on the road.

TWO – Washington Redskins at Dallas Cowboys (-7.5)
The Alex Smith injury was ugly… and creepy, considering it happened on the same day as Joe Theismann’s similar misfortune (33 years later). Now, it’s the Colt McCoy show. Everyone is handing the division to the Cowboys, saying the injured Redskins are headed in the wrong direction.

Before you dismiss the pesky ‘Skins, McCoy knows the system and the offense. He led the Redskins back against Houston and nearly pulled out a win. Sure, the majority of the offense is dinged up, but don’t discount the Redskins defense.

Look at the Thanksgiving history. Dallas is 30-19-1 lifetime on turkey day, while Washington is 3-7. But consider this: the only lopsided win for Dallas was on October 14, a 40-7 victory over the Jags. Every other victory has been by a touchdown or less. I’m banking on that. Also, despite all the injuries, the Redskins continue to find a way to stay in games.

I really like Washington’s defense, so give me the Redskins and the points on Thanksgiving.

ONE – Chicago Bears at Detroit Lions (+3)
Mitch Trubisky is doubtful to play, which makes this less likely, considering Chase Daniel is now a good bet to start for the Bears. Yet, looking at the rest of the slate, I still like Chicago. Well that, plus the Bears are mentioned in one of the key movie quotes for this post. In all seriousness, the world knows what Chicago did to Minnesota’s stronger offense last Sunday night. The Bears defense has an NFL-leading 18 INT’s and is 5th in sacks, with 32. Khalil Mack is a one-man wrecking crew. Matthew Stafford could find himself on the ground between two pillows – wait… “those aren’t pillows!”

The Lions are 37-39-2 on Thanksgiving. Sure, the Bears are playing on very short rest and Chase Daniel is likely to be the starting QB. But for Detroit, both Kerryon Johnson and Marvin Jones are out, too. That spells too many question marks for a Detroit offense facing a very solid defense.

Because of all these factors (and the fact that the movie clip follows the pillow panic with a lot of positive talk about the Bears), give me Chicago to cover on the road. In Chase we trust.

6 thoughts on “Week 12 NFL Pick ‘Em: You Can’t Please All the People All the Time”