Dan Mullen was pulled aside by an ESPN sideline reporter right after his Gators had sealed a victory against instate rival Florida State.  Mullen was elated about the win, until….

Mid-question, on live television, Mullen spotted one of his players about to do his best Baker Mayfield impression by planting a team banner in the middle of his opponent’s field.

Mullen whistled, trying to get his player’s attention.  Once he realized that he wasn’t, he abandoned the interview, running up to his players and insisting they “show some class.” 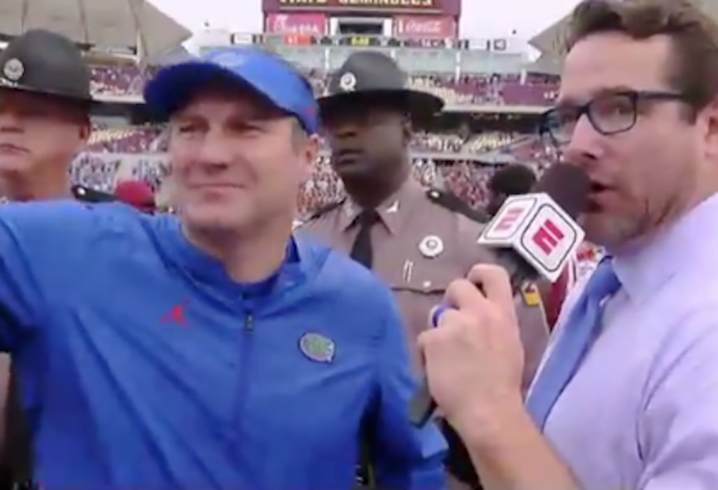 There was some jostling post-game.  There always is in this series.  But anything out of hand was avoided thanks to Mullen, his staff and the staff on the opposing sidelines.

Boys will be boys, especially in rivalries like Florida-Florida State.  It is one of the most heated in college athletics.  There is no love lost; there are far more punches thrown.

Florida hadn’t beaten the Seminoles in as long as their fans care to remember (five years but who’s counting?).  Florida’s seniors wanted to celebrate after a victory… but not in that way.  Coach Mullen saw to it.  This is not Urban Meyer’s Florida.

Mullen’s move shows the kind of program he wants to create, or rather recreate, at Florida.  It’s been a few down years since that coach with the faulty heart left for that school up north and even longer since another visor patrolled the field.  Since then, Florida fans have suffered through Muschamp, McElwain and a few interims in between.  Oh, the horror.  Ironically, both those aforementioned won SEC Coach of the Year.  Both were eventually fired.  Florida is not interested in individual honors.

Last summer, the department finally (re)hired a man who understands the meaning of the Florida-Florida State rivalry as well as conference championships.  He’s off to a solid start.  Baby steps.

Florida played a near perfect game, their final of the regular season, against their in-state rivals who were by all accounts having a down year.  Florida took advantage.

Most impressive of it all was not how their defense kept applying pressure nor how the running back duo of Jordan Scarlett and Lamical Perine combined for over 200 yards.  It was the play of the once highly-touted turned turnover-prone Feleipe Franks, who played a remarkably efficient ball game, drawn up by his new head coach.  Looking over his shoulder at recruits vying for his position, Franks played within himself and it led to a victory.

We finally saw progress and that’s what any coach wants out of his team.  Good coaches get their players to improve.  That’s what Dan Mullen has done his first season at Florida.  That’s what this program has needed for some time.

When you hold your opponent to only one third-down conversion, you’re doing something right.  Ditto when you end a five-game losing streak against them. 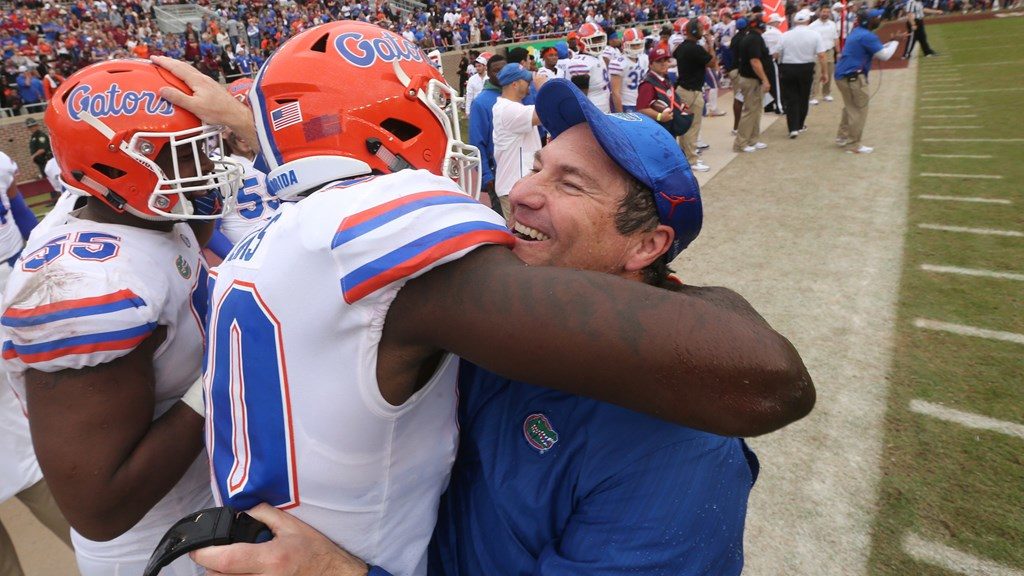 You could hear it in his player’s voices and see it in their faces.  Sometimes all it takes is one man to create a culture of change.  Mullen will be the first to tell you that it’s not all about him, that it’s about his players, his coaching staff, the program and the fan base.  But rest assured, the bucks stops with Coach Mullen.  It will be his head that rolls if he can’t turn things around.

Like any other major program, Florida has a reputation for a quick hair trigger if results don’t come as the boosters see fit.  The big wigs at Florida are happy again, as is their fan base, as they await their relevant bowl.  It had been a while.

Far too often these days, we see coaches overlook certain behavior.  Mullen will not stand for it.  Leaving that reporter on live television while he fumbled for words told you all you need to know about where Mullen has this program.  Mistake-prone quarterbacks no longer making mistakes leads me to believe Florida made the right hire.

Big times programs like Florida are familial.  Mullen was there for the glory days, the second batch.  He’s now looking to create a whole new batch of glory days, one with his own personal touch.  It looks like he’s off to a good start.