It’s the playoffs and if you’re an inquisitive mind like me (and if you’re also looking for a good tip), you have a tendency to ask people who they like this weekend.

If you’re not interested in football, you’ve probably stopped reading by now, but if you are, you recognize this weekend as the most exciting of the NFL season.  That’s because the winner of the two games this Sunday, a.k.a., the AFC and NFC Championship Games, determine which two teams will go to the Super Bowl.

The four teams remaining have arguably been the best four teams all year: the Kansas City Chiefs, the Los Angeles Rams, the New Orleans Saints and the New England Patriots.

However, when you ask people who they want to win the Super Bowl, you’ll generally get five different answers.  How can that be, you ask, when only four teams are playing.  The answer, my friends, is simple.

When asked who they want to win the Super Bowl, people will choose any one of these four teams they like the most, however, if they have no affiliation whatsoever, the answer you’ll most likely receive is… “Anyone but the Patriots!”  Clearly this sentiment is far more common outside the states comprising New England but if you live anywhere else within the continental 48, take a straw poll and I bet you’ll be surprised how often you hear this answer recited verbatim. 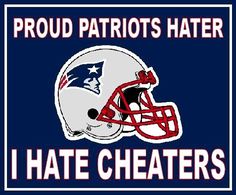 So how did this all come about?

Well, we all know it started when Drew Bledsoe was flattened by Jets linebacker Mo Lewis, thereby allowing backup Tom Brady to take his place and never look back.  It has been a period of unprecedented dominance ever since.  All Brady has done is enter himself into the ‘greatest quarterback ever’ conversation, all the while leading his team to seven Super Bowls, winning five of them.

The answer “Anyone but the Patriots!” clearly marks a sore spot for some NFL fans but I couldn’t help but wonder why all this hatred came about.  I mean, seven (and perhaps soon to be eight) Super Bowl appearances is certainly grounds for approval.  So why would so many disinterested parties want so desperately for this team to fail?

I’ve come up with a few reasons that I believe have caused all the ruckus: 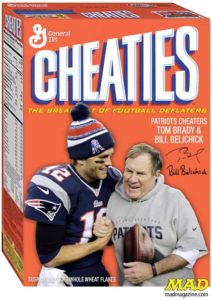 No, my friends, I’m not referring to the countless number of Major League Baseball players who took steroids in the nineties and are also commonly referred to as “cheaters.”  I’m referring to the New England Patriots.  I guarantee you that if you ask someone why they don’t like the Patriots, they’ll inevitably bring up Deflate-Gate and Spy-Gate, two of the scandals for which New England has been associated just as much as their five Super Bowl rings.  Spy-Gate, for which the organization and its head coach were both fined, involved them recording opponents’ practices… as if they needed to do that to get a leg up in the AFC East.  And we all recall Deflate-Gate, wherein Tom Brady was accused of decompressing footballs to gain a competitive advantage.  For this sin, he was suspended four games.  These are the facts as we know them.  It bears note, however, that just because no other team has been caught filming opponents or deflating footballs does not mean that it has never happened.

I’ve lived in Boston.  I remember a time when the only local teams that had won championships were the Celtics and to a much lesser extent, the Boston Bruins.  Prior to 2004, the Red Sox hadn’t won a World Series since Babe Ruth was young and the Patriots, well, they had never won one.  Boston was a struggling sports town with fans that suffered badly from championship envy.  Fast forward a few years later and the area won five titles from the Pats, four more from the Red Sox and one more each from the Bruins and Celts.  That’s an overflowing trophy case.  Boston went from a town of loveable losers to a fan base that became quite unbearable.  The only way sports fans outside Boston could make fun of those within was to joke that their heterosexual male fan base would gladly perform sexual favors on Tom Brady, far more so mind you than they would with his super model wife.  To this day, you’d be hard-pressed to find a Pats fan that would argue this point. 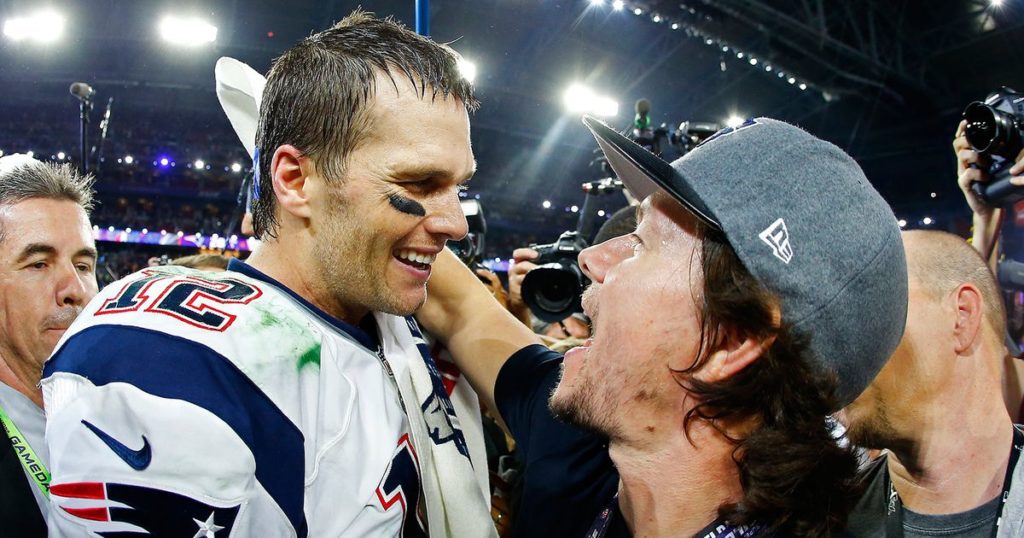 I can come up with a few more reasons we as a collective hate the Patriots but they all boil down to Brady and Belichick: the two most despised, football men living outside of Massachusetts.  Gregg Popovich and Tim Duncan won five titles together in San Antonio.  People don’t hate them.  Michael Jordan and Phil Jackson won six together in Chicago.  Those two were revered in their heyday.  Joe Torre and Derek Jeter won four World Series together and well, okay, that’s a bad example because everyone with a soul should hate the New York Yankees.

But the New England Patriots have resoundingly become one of the most hated organizations in sports… for winning.  Personally, I don’t have a problem with them.  What they’ve done, regardless of how they’ve done it, is pretty damn impressive.  That fact that people hate them almost makes me want to root for them more if only because their reasons for hating them are essentially unfounded and most certainly media-driven. 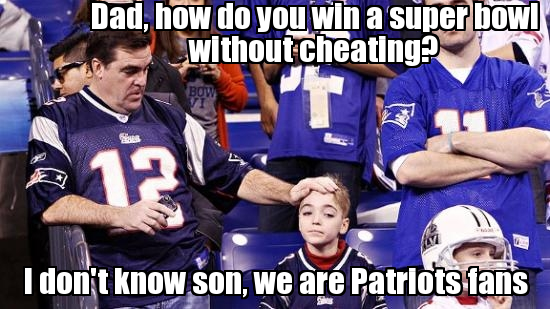 They’ve put together an incisive brand of football, the best by far we’ve seen over the past fifteen years, if not ever over that extended period of time.  If you hate them with a passion, that might just be a ‘you’ problem and it’s probably been a ‘you’ problem for a long, long time.

The irony here is that, as a people, we don’t like change.  Furthermore, we generally enjoy greatness and don’t mind dynasties… except in the case of the New England Patriots.  In their case, we want nothing more than to see them fail miserably.  Anyone, but the Patriots, because it happens so rarely.

It is now mid-January.  New England has potentially two more games to further cement their claim as one of the greatest dynasties in modern sports.  It’s just too bad so many people are rooting against seeing it happen.

22 thoughts on “Making sense of the Hatriots”