With my brand, new car in the shop needing, wait for it, a whole new engine, #HyundaiBuyerBeware, what better time to catch up on some NBA Playoffs?  I wasn’t driving anywhere so I grabbed the remote, cracked open a bottle of vino and watched what this new generation of NBA ballers had in store.

The Wednesday/Thursday combo platter featured four pivotal games between the eight teams remaining.  Could the Celtics regroup down three-games-to-one against Milwaukee or would the Greek Freak and company put them out of their misery?  Tied 2-2, which Western Conference team would emerge, Houston or Golden State?  Would Kawhi Leonard continue his scorching hot play and lead the Raptors past Philly and could Nikola Jokic lead Denver past Portland or would Damian Lillard crush their hopes like he did Oklahoma City’s?

After a convincing Boston win in Game One of this series, those who put their money on the Celtics at +200 had already started counting their winnings.  Here’s hoping they didn’t outspend their bankroll.

In the four games that followed, the Bucks ran over the Celtics by a combined 65 points.  During a four-game beatdown Beantown would rather forget, it appeared the Celtics either didn’t want to cover Bucks superstar Giannis Antetokounmpo… or they couldn’t.  I’m not sure which is worse.

It took Michael Jordan seven years to win an NBA title.  He was 28 years old.  This is Giannis’ sixth year in the league.  He is 24 and frightening.  He is a gliding, graceful seven-foot version of the NBA superstars that have preceded him. 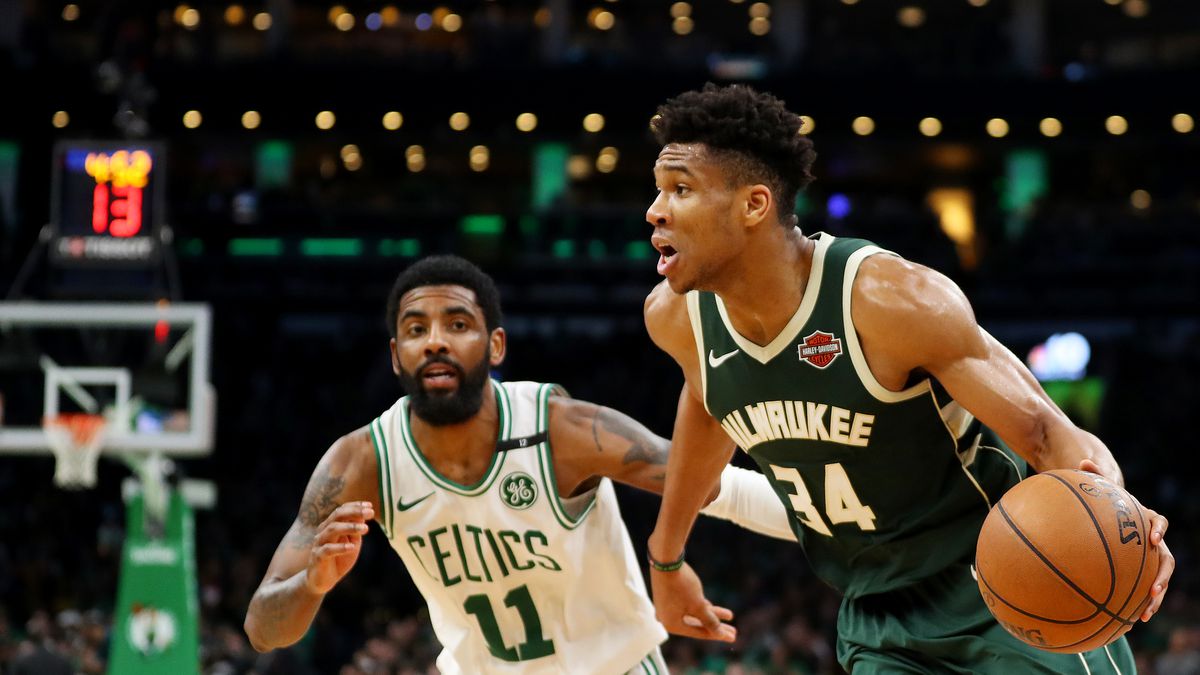 Giannis is a hybrid, a new generation of player.  He’s almost a point-center.  He’s not a true center but he is over seven-feet tall and you sure do find him around the rim an awful lot.  He’s not a point guard because they haven’t made seven-foot point guards… yet… but we’re getting closer to that day’s arrival.  In Game Two of this series, Giannis scored 32 points, all of them from the paint or the free throw line.  In their four wins against Boston, he shot 38-64 from the floor.  That’s just shy of 60%!

On the other hand, Games Two through Five had Celtics fans hiding their heads in the sand.  Kyrie Irving was nowhere to be found, unless you looked in the missed shot department.  He was as inefficient in this series as Giannis was efficient.  Kyrie shot 48.7% from the floor during the regular season.  In the final four games of this series, he shot 25-83, a hair over 30%!

This was not the Kyrie Irving we saw in those Cavs-Warriors series who at times looked like he was the best player on the floor.  Keep in mind LeBron James, Steph Curry and Kevin Durant were on that very same floor.  It can also be argued that Irving was the worst player in this Celtics-Bucks series, especially if you compare his performance to what we’ve come to expect.

Either way, more attention should be paid to how well the Bucks played.  Milwaukee and their young, budding superstar will now go on to play the winner of the Raptors-Sixers series.  The Bucks hadn’t beaten Boston in a playoff series since 1983, a series which they swept.  This series, a gentleman’s sweep, might symbolize a changing of the guard, with huge Celtic question marks headed into this off-season while Milwaukee looks like it’ll be fine for quite some time.

I’m not telling you much about this series that you don’t already know.  Three league MVPs.  Two guys averaging 36 points in the series. One team looking for a three-peat.  One bearded fella looking to make sure that doesn’t happen.

I have to admit, I’m a huge fan of this rivalry.  You have four un-guardable players who can score from anywhere at any time and put up obscene numbers as they see fit.  Houston has yet to get over the hump against Golden State.  Few teams have.  But if anyone’s given them a run for the money, it’s Houston who, over the past few years, has beaten them more than other team.  Just not when it matters.

This is a series in which no lead is safe.  At one point in the first half of Game Five, Golden State went on a 17-0 run.  They were up by twenty.  One would think that’d make for an unwatchable game.  Not with the Houston Rockets who can match Golden State bucket for long-launched bucket.  The Rockets narrowed the gap to one in the third. 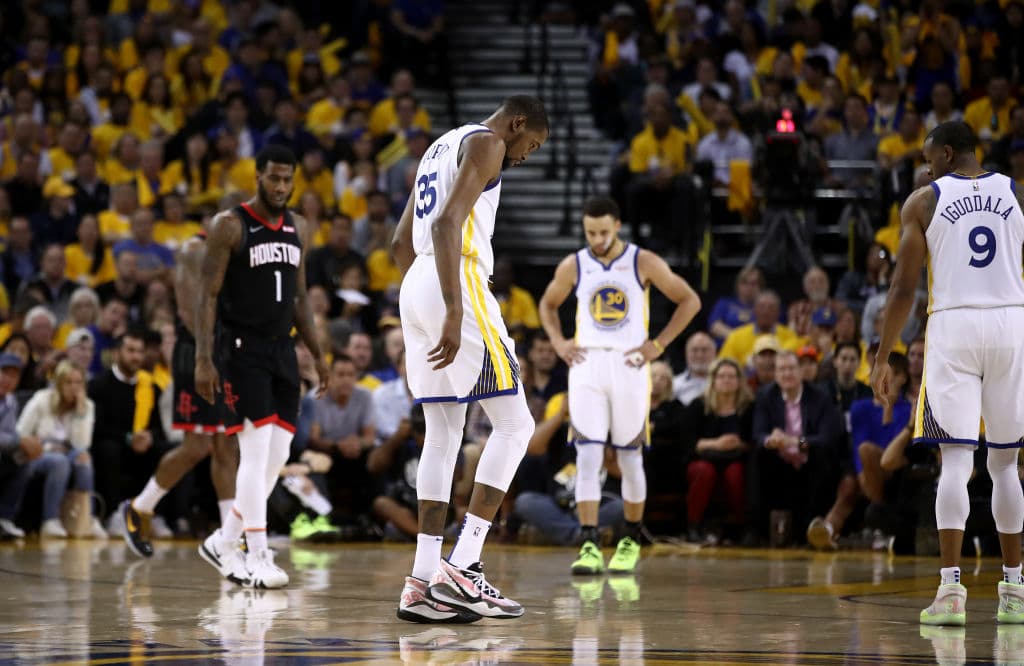 That’s when all of Oakland gasped and not because of the squandered lead.  Late in the third, Kevin Durant got a flat.  Most feared an Achilles tear.  TNT later reported it was a calf strain.  With Durant off the floor, Houston took the lead.  In a nail-biter of a fourth quarter, Golden State’s core of Klay Thompson, Draymond Green and their original MVP Steph Curry took over to seal a victory, barely.  All five games in this series have been decided by six points or less.

In a series you think would be dominated by shooting and scoring, it was once again rebounding that tipped the scales. In each of the first five games, whoever won the rebounding battle won the game.

Game Six is Friday night.  Kevin Durant is out for the rest of the series.  Just when we thought it wasn’t possible, this series just got even more interesting.

When you walk onto a lot to buy a new car, everything looks great on paper.  You read the ticket and can’t imagine how anything could possibly go wrong.  The car will last you forever.  That is the 2018-19 Philadelphia 76ers in a nutshell.  Everything looks great on paper.  You’re just not sure what you’re going to get when you drive off the lot.  At times, they’ve looked brilliant.  At others, they’re a breakdown waiting to happen.

Meanwhile, last off-season, the Toronto Raptors went shopping for the most reliable car on the market: Kawhi Leonard.

Entering Thursday night, Toronto led this series 3-2.  They embarrassed Philadelphia by 36 points in Game Five but closing out the Sixers in the city where Rocky ran the steps would be no easy task even though the Raptors were slight favorites.

In the first half of Game Five, Philly drove off the lot to a hot start, finally looking like the team many pundits thought had championship potential.  But reliability has its privileges.  This is not Toronto’s first drag race. 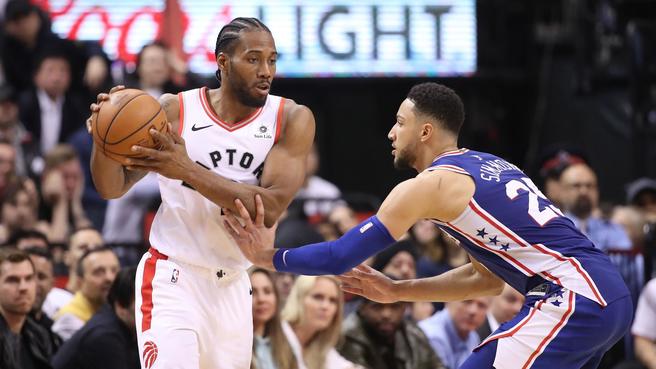 The Raptors refused to go quietly, that is until late in the third quarter when Philadelphia exacted revenge and jumped out to a 23-point lead. They never looked back, forcing a Game Seven on Sunday night.

The Philadelphia 76ers are a dangerous, well-rounded young team who, when living up to their potential, are very tough to beat.  But winning on the road in a Game Seven might be too daunting of a task for a team that has never played in such an environment.  If Philadelphia plays on Sunday like they played on Thursday, they’ll assure themselves a spot in the Eastern Conference Finals.  Anything less than that and we’ll be watching Toronto against Milwaukee for a shot at the NBA Finals.

With all the talk about the guard play of the Portland Trailblazers, the Nuggets have found a pretty good guard of their own.  I’ll be the first to admit I never paid much attention to Jamal Murray’s game.

The third-year player from Calipari’s One-and Done U has had himself quite a series, one I thought would be dominated by Portland guards Damian Lillard and CJ McCollum.  Combine Murray with the triple-double machine that has become Super-Serb Nicola Jokic and Denver was one win away from playing in the Western Conference Finals.  After Thursday night, they still are.

Murray and Jokic got Denver off to a hot start in Game Six.  They scored 20 of their team’s first 34 points, pushing Denver to a nine-point lead on the road. 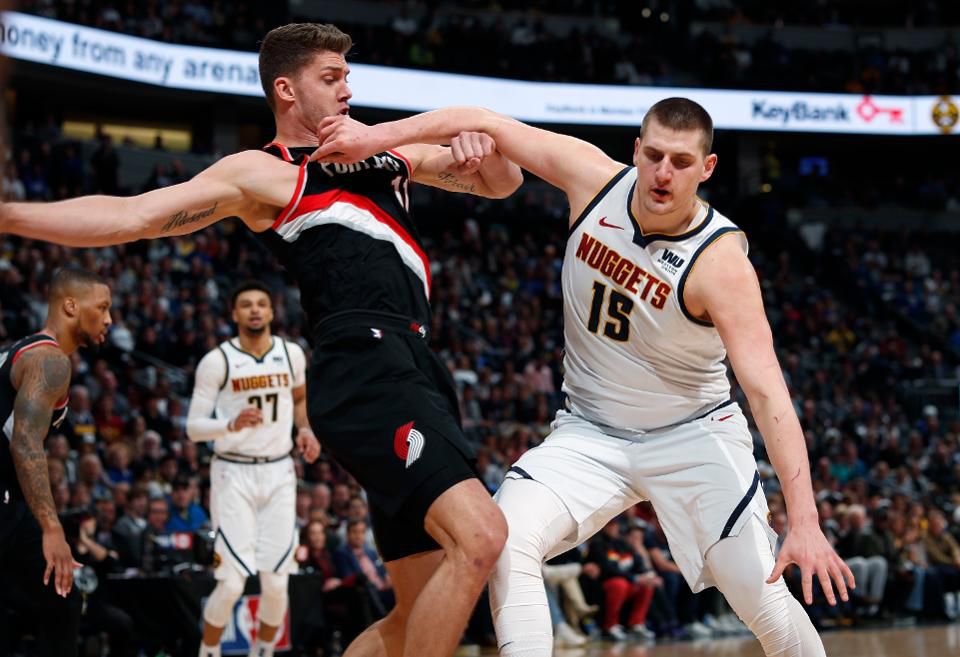 Then came Portland’s backcourt.  McCollum and Lillard would not stay quiet for long.  The two combined for 26 in the first half.  Portland went into the locker room at half up by four.

In a see-saw third quarter, Damian Lillard reminded us that Steph Curry is not the only Western Conference All-Star who can nail jumpers from 30 feet away from the basket.  Towards the end of that quarter, Lillard made two from nearly pornographic length.  Stretching and frustrating the Denver defense, he finished the third with 17.

Rodney Hood didn’t want his teammates having all the fun.  He chipped in with an unconscious 25.  Portland forced another Game Seven, which is good for fans and even better for ratings.  This time, it’ll be on Denver’s floor, the one-two punch of Lillard-McCollum once again going against the big Serb.

I’m not sure who’s going to win this slew of home Games Seven.  Logic says to go with the home teams.  But this is the NBA Playoffs.  Since when has logic mattered?