Burt Reynolds passed away last year. I thought about writing a proper tribute when it happened but I figured I’d leave that to the super fans.

Growing up, I wouldn’t necessarily say I was a huge Burt Reynolds fan. That being said, there was once a time when pretty much everyone in America was.

In the late 70s, he was THE biggest star in Hollywood. Period.

Long before Hooper, Burt Reynolds established “how a man should be” status in Deliverance and later, The Longest Yard. (Seriously, watch these movies again if you haven’t. They’re both amazing!)

Growing up in that era, you didn’t necessarily want to be Burt Reynolds. You just knew you eventually wanted every woman you ever met to fawn over you the way Sally Fields did him. 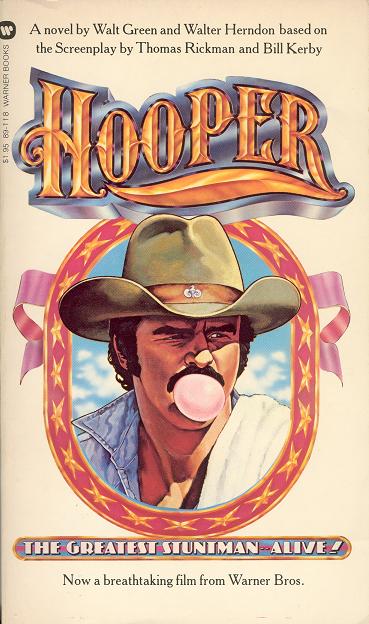 When my blogging brother from another mother asked his fellow net-dwellers to come up with the assignment to recall memorable movies starring athletes but not necessarily about athletes, Hooper was the first film that came to mind. I figured reviewing the film would serve two purposes: honoring Reynolds in a way that I had wanted as well as reminiscing about a movie I enjoyed so much as a child.

For some reason, the bar scene with Terry Bradshaw always stood out in my mind, which is ironic considering I now work in a bar for a living. Back then, Bradshaw was racking up Super Bowls at a Brady-like pace. To this tiny, little, ten-year-old, Bradshaw was an intimidating dude. This wasn’t the goofy, balding Bradshaw we see commentating on Fox every Sunday. This was a mean dude who once beat the shit out of Burt Reynolds in a country bar. Brady might have six Super Bowl rings but there’s no way he’s taking a motorcycle helmet to the chin or being thrown through a glass window into a dumpster full of trash.

Hooper (1978) came out in between Smokey and the Bandit I and II so Reynolds was at the top of his game. Smokey and the Bandit had made over $100 million at the box office back when that number meant something. In Hooper, Reynolds plays a stunt man which is actually how he began his career. Hooper was so successful in the box office that ABC decided to air The Fall Guy with Lee Majors only a few years afterwards.

When I heard that Hooper’s other star Jan Michael Vincent had also passed, I thought I’d write the review before anyone else kicked the bucket. The film also stars Robert Klein, Adam West and obviously Sally Field.

In Hooper, Reynolds plays an aging stuntman whose alpha male status is threatened when a young Jan Michael Vincent steps onto the set. The film is very 1970s, including a scene where Hooper comes home tired from work one day to find a short-shorts wearing Sally Field waiting for him out front with hugs, kisses and a cold beer in hand. Ah, the good old days.

The scene that impressed me so as a kid, takes place at the fictional Palomino Club, a watering hole where stuntmen go after a hard day’s bruise. What follows is a classic Western movie bar brawl with bodies flying everywhere.

Bradshaw and his crew, who happen to be sitting a few tables over, find that Reynolds’ band of stuntmen (and women) are being a little too rowdy for their liking. Bradshaw and company had just put fifty cents in the jukebox and were upset that they couldn’t hear the songs they had requested. They demand Reynolds refund their money.

The wise-cracking Reynolds puts on a motorcycle helmet and runs head first into the juke box to refund Bradshaw his quarters. The two then go toe to toe. Reynolds lands the first blow, which barely phases Bradshaw. Reynolds knocks out Bradshaw’s front tooth; all he does is smile back, front-toothless. “We may be in trouble,” Reynolds mutters to his friends. He then chin-bumps Bradshaw with his motorcycle helmet which evokes nary a response. “We are definitely in trouble,” Reynolds says again. Bradshaw then cracks open Reynolds’ helmet and all hell breaks loose. 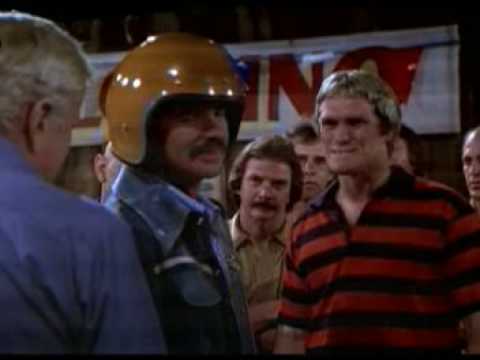 Now, this might sound cheesy to you but to a ten-year old, this bar fight scene was larger than life.

After getting tossed out of the Palomino’s window, Bradshaw and Reynolds kiss and make up after which Reynolds invites them all back to his place. The very next scene features the entire crew passed out on his sofa beer-drunk, with Reynolds watching Deliverance dailies.

I’m not sure why that scene stands out so but it does to this day. Hooper is a fun film that doesn’t take itself too seriously. Much like Quentin Tarantino’s current box office smash Once Upon A Time… In Hollywood, it’s an old school salute to the hard work and broken bones that stuntmen put into films. It’s also a film about passing one’s prime, not that I can relate, of course.

I’m not too sure a Burt Reynolds could exist in today’s America: a wise-crackin’, denim-wearin’, shirt-half-unbuttoned, slightly sexist and occasionally, womanizing box-office mega-draw. But he did once. I remember it. Fondly. Thanks, Dubs, for allowing me to reminisce.