For every action, there is an equal and opposite reaction.

I’m proud of my heckling game. I wouldn’t necessarily call myself an all-time great but once I’ve partaken in a slight toke of a friend’s marijuana cigarette, one of my favorite pre-NBA game rituals, I can rattle off quips with the best of ‘em. It sets me in a finer place.

You can generally judge how strong your heckling game is by the crowd reaction immediately surrounding you. If you land a solid few chuckles, a high five or two and perhaps even a friend for the game, you know you’ve said and done the right thing. If you see those around you rolling their eyes or even garner a “Sshhh!” or two, it’s probably best to rethink your approach.

There are, of course, certain guidelines to heckling. You don’t want to get too personal and you should always keep the cursing to a minimum when around children. You definitely don’t want to bring someone’s family members into the mix as that’s generally considered gauche and below the belt. These are professional athletes whose skin you’re trying to get under. You’re not going to get them off their game. And to be clear, just because you paid top dollar for a ticket, that doesn’t give you the right to (think you can) affect the game’s outcome by being downright offensive. 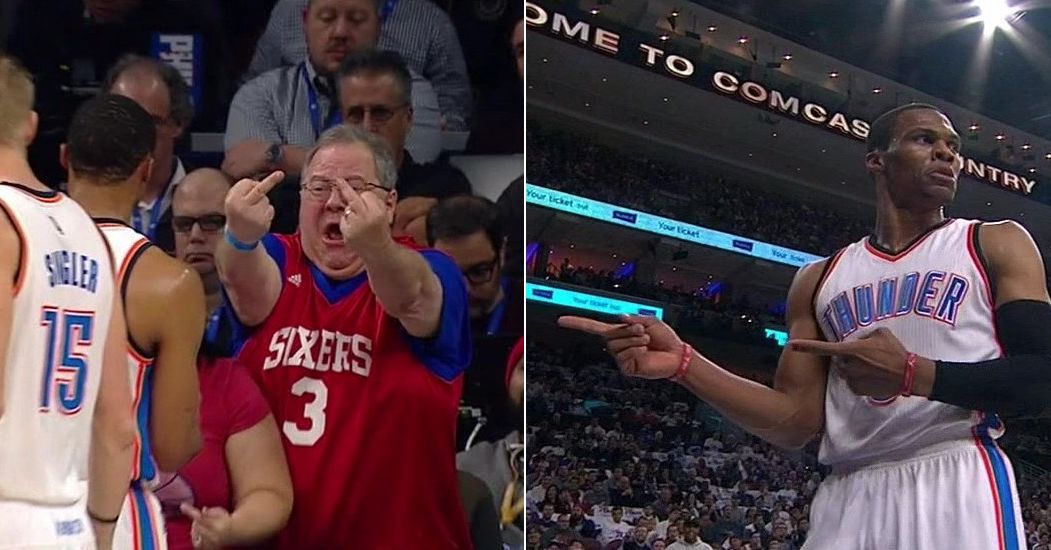 Either sit back and try to be clever (which is harder than you think) or just shut the hell up and enjoy what you paid for. When in doubt, always remember the following cardinal rule: you’re not as funny as you think you are.

Well, one NBA fan in particular has made a name for himself. In the ongoing chronicles of American white male self-entitlement, meet Shane Keisel.

You might remember a while back when Mr. Keisel got a little feisty with Russell Westbrook who, as a general rule, is a bad choice of opponents with whom to get feisty. We might as well call Westbrook “He the Un-heckle-able” for Westbrook is one athlete I would leave alone if he were to waltz into my arena. As former teammate Nick Collison once said of Westbrook, “his give-a-fuck level is very, very high.”

Apparently, Keisel didn’t know this about Mr. Westbrook. Keisel and a date attended an Oklahoma City-Utah Jazz game last March. Keisel’s heckles (again: read above common-sense rules about heckling) allegedly got a little out of line. In the middle of a game, Keisel shouted that Westbrook should “get on his knees like he used to.”

That was all Westbrook needed to hear. Feeling the comments were racially motivated, the animated point guard and former league MVP clapped back, responding that he would “fuck up him and his wife.” 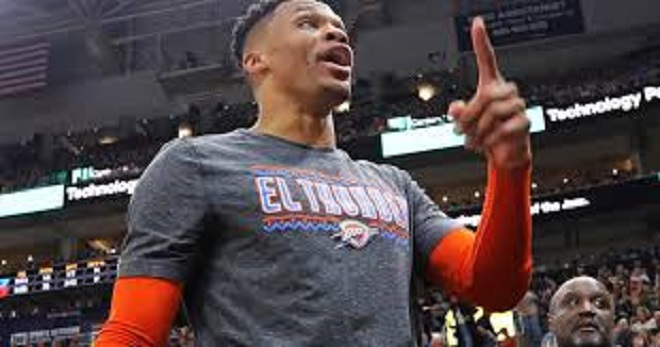 Keisel’s comments not only led to his Jazz season tickets being revoked for life but also into social and professional banishment. Keisel was fired from the car dealership which employed him. It’s good to know there are companies out there that still hold their employees to a higher standard even when they’re off the clock.

As a result, Keisel is now suing Westbrook for $100 million in compensatory and punitive damages, alleging defamation and infliction of emotional distress. Just when you thought you’ve heard it all in America, the latest attempt to get rich quick is to go to a person’s place of business, say rude things to them until they lose their cool and then blame them for taking it too hard.

To be fair, Westbrook did lose his cool. It’s easy to say he could have responded differently or not at all but we weren’t there and we don’t know.

I’ve been distressed before. I can’t say I’ve been THAT distressed. Perhaps Keisel can buy himself some couth and heckling lessons with that $100 mil. Nothing screams self-important douchebag more than suing someone for nine figures and crying defamation of character.

We are all mistakenly under the impression that people want to hear what we have to say. In fact, that pretty much explains why this website has been in existence for over ten years. Nothing, however, could be further the truth. Our heckles (well, your heckles) aren’t creative. This is not your lucky day when a famous athlete turns to you and offers a wink of approval.

So, sports fan, the next time you attend an event, do yourself the favor of remembering Sir Isaac Newton’s third law of motion: for every action, there is an equal and opposite reaction. It will most likely ensure that you don’t piss off someone that you probably don’t want to piss off. And you might just get to live another day not entirely defamed of your character.